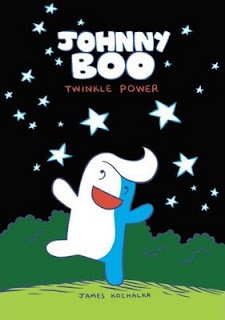 James Kochalka's second "Johnny Boo" children's book arrived at the Geniusboy Firemelon household this week, much to the delight of the local children. We gathered the little ones out on our front porch, roasted mashmallows, made snow angels, carved ice sculptures of our favorite Bible scenes, and read excerpts of "Johnny Boo: Twinkle Power," followed by selections from "American Elf," the first three volumes of "Superf*ckers," and then sang and danced along to James Kochalka Superstar's "Bad Astronaut."

Okay, maybe all that other stuff didn't happen, but I did read the new "Johnny Boo" book with my son last night, and at one point he laughed so hard that he couldn't read his part out loud. He was convulsed with joy at the hilarity of the Ice Cream Monster's wiggle power.

I don't know how many of you have young kids, but great children's books are surprisingly difficult to come by. Sure, you could probably name a dozen off the top of your head -- the stuff by Maurice Sendak, or Richard MacGuire, and, yeah, Dr. Seuss -- but even if you can name a dozen, or even twenty, that still leaves over 340 bedtimes in which to read some other, lesser, work of children's picture book literature.

I also finished up my long-delayed reading of all the "Fantastic Four Visionaries: John Byrne" volumes. I had read the first six last summer, and then I just never got around to Volumes 7 or 8. I have to say that Byrne's run does not end well at all. I had actually read the last eight (or so) of his stories when they originally came out -- along with a smattering of earlier issues, whenever our local general store's selection matched my desire to convince my parents to buy me a comic. So I knew that it kind of petered out at the end, although I forgot that Byrne left in the middle of a story arc -- to go off and do "Superman" from what I recall -- and Roger Stern and Jerry Ordway finished up a really terrible twisted-future-inside-a-bubble-tale for him. Maybe Byrne could have nailed the landing on that one, and his first installment was decent enough, but Stern and Ordway just turn it into an overlong, over-wordy lesson on how not to tell interesting comic book stories. And I like Stern and Ordway -- especially their work from the mid-1980s -- but their "Fantastic Four" work was not their best.

But I do still think that John Byrne, in his prime, is basically my Platonic ideal of a superhero artist. I prefer plenty of other artists these days, but when I think of pure superheroics, John Byrne comes to mind. I don't know if it's his clean design sense, his perfectly-paced action, or his deceptively simple character work, OR if it's just because his comics were some of the first I ever saw as a kid (or, more likely, a combination of all those things), but there's something soothing and comforting about Byrne's artwork. It's just plain pleasing.

The stories in Volumes 7 and 8 aren't so hot. Volume 7 is pretty terrible, actually, with the inclusion of an "Avengers Annual" that crosses over with an FF skrull story, and a whole section devoted to the revival of Jean Grey (even "X-Factor" #1 shows up in its entirety, a comic Byrne had absolutely nothing to do with). Volume 8 is an improvement, but ends with the weak Stern/Ordway issues, and then...that's it. Byrne's "Fantastic Four," which had plenty of memorable moments -- most of which involving Dr. Doom, who appears in the last two volumes just as part of a convoluted Beyonder sequence -- fades away in the end, never living up to its potential as an epic saga. The eight volumes (and I know there's a "Volume 0," but I'm ignoring that one) provide a few great individual stories, but nothing that rises above good mid-80s Marvel comics.

Still, John Byrne is one of the great superhero artists of all time, at least at Chateau Geniusboy Firemelon.

What are YOU reading?
Posted by Timothy Callahan at 6:00 AM

I never got around to reading Byrne's Fantastic Four, but I did get a peek at some of the serious literature quotes he put into, and found them hilarious. I did get to read some issues of the Thing spin-off (featuring the aftermath of Secret wars) and I wonder what you think of those:) Btw, Kochalka IS great!

When I was 15, I used to say Byrne was my favorite. Now, not so much. I remember admiring his work on Iron Fist. I look at it now, and wonder if it wasn't the inker who perfected the look I like.

Volume 0 is kind of fun, actually.

I imagine Kochalka's kids' stuff might be pretty good. His "adult" stuff is terrible, but he seems like a good creator for kids' stuff.

Finally finished my long reading of The Joke's Over by Ralph Steadman... mostly because I began it, read a bunch and then set it aside. It had its moments, but, much like Hunter Thompson's writing, it sagged during the late 70s through the early '90s.

Began rereading Kingdom of Fear by Thompson, which I read when it first came out and not since. Pretty decent.

Reread Skreemer by Peter Milligan, Bret Ewins and Steve Dillon, and like it more this time (and I liked it a lot the first time I read it).

SuperF*ckers is an unfunny parody of superheroes, and if you're going to do a parody, it ought to be funny and not just have a lot of cursing. American Elf is deadly dull, for the most part. The one or two days a year that sparkle with wit and humor can't make up for the 350 or so where Kochalka makes a potty joke or whines about not getting sex. The reason why I think he'd be a good kids' writer is because his "adult" stuff is already so juvenile, it seems like a natural fit for him!

Are you going to San Diego this year? Don't you just want to punch me right in the face the moment you see me?

I could never bring myself to check out SuperF*ckers, but that's only because it came out AFTER I'd had a couple of stories for a comic I'd written called "Superfucks" online for a while...

I just finished reading the new "Saga of the Swamp Thing" trade, which was amazing. Funny how, looking back, you can see seeds of what would become The Killing Joke, Watchmen, and Promethea even in the the first few issues of his American work.

Yeah, when I first saw SuperF*ckers, I thought of Superfucks. I knew Kochalka wasn't ripping it off, I just felt an extra bit of geek pride for being in an internet minority.

Currently reading: "The Areas of My Expertise" by John Hodgman and "Fanboy" by Sergio Aragones et al.

I just re-read Metal Men by Rouleau last night, and it held together much better on the third read-through. It's still a bit of a mess but at least it's exuberant & interesting. Did anyone else get The Great Unknown? I starting to really dig Rouleau's stuff.

You are so, so wrong about two things: the quality of Moon Knight, and the genius of James Kochalka. But that makes you endearing.

As far as children's books by comic artists go, I've just recently read "Zen Shorts" by Jon J. Muth, and it was spectacular. Apparently there's a sequel, too. Woot!

Yeah, my wife -- who teaches 3rd grade -- asked me if I knew a comic book artist named "Muth" because she'd read a book by him to her class, and I was like YES, YES, YES and then showed her Moonshadow and by then she'd lost interest in the conversation.