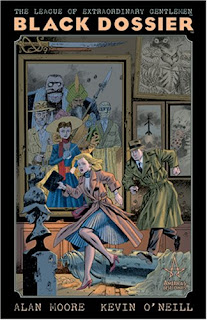 You can read Part One over at Chad Nevett's blog, but here's part two of our discussion of why Chad refuses to make a Best Comics of the Decade list, and what might have been on it if he had broken down and compiled such a thing. Also, I say stuff.

TC: Now, getting back to things I know you have read, would Brubaker's "Captain America" make your list for the decade? Would anything by Brubaker make it? And how about Bendis? His influence on the the superhero comics over the past decade is hard to ignore.

CN: Considering "Captain America" has placed on my top ten lists for the past two years (and may make 2009's list for all I know... having not made that list yet), I think it would have a good shot at making the best of the decade. "Point Blank," "Sleeper," and "Criminal" would probably beat it out, though. So, actually, "Captain America" probably wouldn't make the list... particularly one limited to 20 works, if only because Brubaker has done better work elsewhere. Not a slight against "Captain America" at all, just that the three series I mentioned are better.


Brian Michael Bendis is an oddity for me. I did a blogathon this past year centered around his Avengers work and enjoy those titles quite a bit, but not much of what I've read of his output stands out as 'best of the decade' material. Then again, I haven't read his two most critically acclaimed works of the past decade: "Daredevil" and "Powers." Again, a case of not having enough money to get everything or titles beginning at a time when I didn't have the money. Of the Bendis stuff I've read, he wouldn't make the list. But, I think if I did a top ten writer of the decade, he would, if only because while no single work of his stands out, he is consistently good. There isn't a lot of his output that I've read that I've actually disliked.

Why not turn our eyes to some of the younger, newer writers? I don't think it's a secret that "Casanova" will make your list and would make mine, but what about the rest of Matt Fraction's output? I have a fondness for his earlier work pre-"Invincible Iron Man," I guess you could call it, while you've stayed a pretty staunch supporter. What's Fraction's presence like? Then, there's Jason Aaron who you've gushed over for the fantastic "Scalped" and the (in my opinion) inconsistent "Ghost Rider"... there's also Brian Wood with "Demo," "Local," "Northlanders," "DMZ," and other works. Do these newer, younger writers make their impact on your list much? I'm sure the best from each would be in contention on my list, but I'm not sure they would really be represented as fully as more established guys like Ellis, Ennis, Casey, and Morrison.

TC: "Ghost Rider" has been a pretty great ride with Jason Aaron powering across the Marvel landscape, but, no, it wouldn't make my Best of the Decade list. As you can imagine, "Scalped" is on there -- though you'll have to wait and see how high it ended up -- but nothing else from Aaron made the list, though he's probably my second favorite writer over the past year. He's coming on strong at the end of the Aughts.

Fraction is represented twice -- or one and a half times, depending how you divvy up the "Immortal Iron Fist" credits -- and, yeah, "Casanova." Man, that's a great comic. But nothing else from Fraction even makes my preliminary list. His "Invincible Iron Man" and "Uncanny X-Men" are good versions of those characters, but I have problems with the art on both titles, and they haven't even come close to "great comics" yet. Put a Ba or a Moon on either of those series and I might change my mind.

Brian Wood has done some very good work as well. I'd say I'd rank "Local," "Northlanders," "Demo," and "DMZ" in that order, but even "Local" wouldn't make my Top 20. He was certainly represented a few times in my preliminary list. But I haven't liked a couple of the recent "Northlanders" arcs as much as the first few, and I've completely dropped "DMZ" from my pull list this fall.

Neither Ennis nor Casey even made my preliminary list, though Ellis did. And Morrison, certainly.

As for my take on Bendis, I'd say that his best stuff is actually "Powers" and "Ultimate Spider-Man," though the former suffers from weak endings to story arcs and the latter had thousands of Mark Bagley pages. Both made my preliminary list.

How about non-mainstream comics? Anything from the indy comic world that might have made your list? I have a couple in my Top 20. And this was the decade of the original graphic novel explosion into the bookstore market. Did any of that stuff crack into Top 20 territory for you?

CN: I've only read the first three hardcovers of "Ultimate Spider-Man," but I'd rank it below his Avengers work (if you take all of his Avengers work as a whole) if only because of my own hang-ups with teenage superhero stories.

"ACME Novelty Library" by Chris Ware would probably be top five material. I'd even guess top three at least. There are simply not enough good things that I can say about his work. As I said last year, while many focus on his art, I am drawn strongly to his writing, his ability to capture the loneliness and despair that people face, the inability to communicate, and the pure self-centered nature that we all have to varying degrees. But, honestly, Chris Ware is a given -- or should be. (And I know he'll be near the top of your list...)

I think Eddie Campbell would have a decent shot with "The Fate of the Artist." Chester Brown's "Louis Riel" would also have a shot. Not sure about something like "Parker: The Hunter," by Darwyn Cooke, which seems to have a very good chance of making my 'best of 2009' list, but it's too new to really judge for the decade. Some books have earned their place after years of love and it's hard to tell how things will hold up. I don't doubt this will, but you never know.
This area of comics is where I feel like I haven't read enough... because I haven't. Money, distribution, immediate interest... it works against me giving this area of comics as much attention as I should.

One book I see mentioned that I really question making the list, I must admit, is "League of Extraordinary Gentlemen," a title I enjoy a lot, but... in that harmless entertainment sort of way. How does it stand in your eyes?

TC: Right now, I have "League" in my Top 5, actually. Though I think the first series actually came out in 1999 (or at least that's when it started), so I don't know if that means that only Vol. 2 and "Black Dossier" and the first "Century" book qualify. Screw it, I say it all counts because its a 21st century comic, mostly. I know what you mean about "harmless entertainment," but everything on my list could be described that way. Except maybe the Clowes and Ware and Mazzucchelli stuff. That's hardcore entertainment.

But if "League" is harmless because it's just basically a fiction game -- a kind of All-Star Squadron for literary types -- I'm fine with that. And, you know what, I bet it would crack my Top 10 for the decade if it was just the "Black Dossier" alone. That thing is ambitious, even if it is just part of Alan Moore's playful scheme to romp through the various literary eras and styles. I think the Dossier is going to get a critical reappraisal any day now. It's better than anyone gave it credit for when it came out.

I think Cooke's "Parker" book is his weakest work to date. It looks great, but the story is as cold as a wet polar bear in winter. (I'm trying out some folksy sayings all of a sudden.) And Eddie Campbell's work is sloppier than a mule at dinner time. (I don't know what that means, but "Fate of the Artist" didn't crack my Top 40. Maybe I need to reread it and remember why.)

So, now that you've thrown out a dozen worthy titles for a possible Best of the Decade list, have you reconsidered doing one? Because all the cool kids are doing it.

CN: Nope. This will have to do for all those who want one from me. Take all of the titles I mentioned, put them in a random number generator and BAM! best of the decade list for you to marvel at and admire and disagree with.
TC: I did that. And "All-Star Batman and Robin" at #1? Nevett, you're crazy!
Posted by Timothy Callahan at 7:43 PM 10 comments:

Johns vs. Ellis: The Final Stats

If I had to combine my Top 10.25 Geoff Johns list and my Top 10 Warren Ellis list from various recent "When Words Collide" columns, it would look like this, with Ellis in bold:


Yes, Ellis "wins" handily. But what does he win, besides my adoration?
Posted by Timothy Callahan at 8:35 PM 21 comments: