My wife and I used to see EVERY movie that came to our local multiplex. We didn't have kids yet, we took graduate courses to become certified teachers, we worked at the mall at night, and after work, we'd go see something that was playing at Hoyts Cinema. Whatever was playing. The "good stuff" first, obviously, but since we took turns choosing, it was definitely a range of genres (and quality). By Wednesdays and Thursdays we were stuck with stuff about secret agent dogs and movies starring Brendan Fraser. Yet we sat through it all. And sometimes, when she worked late (at the Cinema, which is how we got in for free to see all these movies), I'd go see something by myself, waiting for her to finish her shift. (I've only walked out of two movies in my life, by the way--and both were atrocities I tried sitting through while waiting for my wife to get out of work: Mad Love and Destiny Turns on the Radio.)

Now, I get to the movies about once a month, and it's stuff like Bee Movie and Enchanted, but as much as I miss seeing the "important" films on opening weekend, I don't really mind watching stuff at home a few months later. I don't miss the idiodic crowds with their cellphones that they have to check every ten minutes, or, in one case, a lady who literally brought a book to read during a movie--and sat there reading it with a had-lamp shining brightly on the pages. I don't miss those people at all.

But, even though I did manage to sneak out and see No Country for Old Men (which I'll be reviewing for Dr. Klock's blog next week), I feel like I haven't really seen all that much this year, even on dvd.

Out of the "important" movies from 2007, which, I guess, includes: American Gangster, Before the Devil Knows You're Dead, No Country for Old Men, Michael Clayton, Gone Baby Gone, Sicko, Ratatouille, Zodiac, Superbad, Knocked Up, Spider-Man 3, Pirates of the Caribbean: Dead Man's Chest, The Darjeerling Limited, and who knows what else, I've only seen four. I feel out of the loop.

Yet I could speak extensively about Shrek 3. But I won't. Because it wasn't very interesting.

There's still hope for me, though. Paul Thomas Anderson's There Will be Blood is coming out soon. I'll be there opening weekend. Count on it.
Posted by Timothy Callahan at 10:01 AM 10 comments:

Not only am I back to blogging, but my blogging can't be constrained by the walls of GeniusboyFiremelon. I've written a review of Enchanted for Geoff Klock's blog. Check it out HERE!
Posted by Timothy Callahan at 7:50 PM No comments: 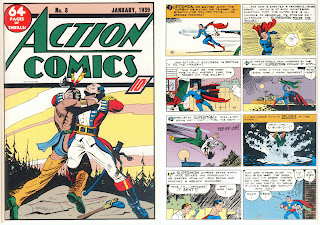 One of the slides I show in my "History of American Comics" lecture (which begins, by the way, with Richard Outcault and ends with Darwyn Cooke) is this cover and interior page from Action Comics #8 (January 1939).
I like the juxtaposition of these two images, because you can clearly see the contrast between the illustrative work of cover artist Fred Guardineer (who was, by the way, the creator of Zatara the magician) and the stiff but blunt penwork of Joe Shuster.  If you enlarge the image by clicking on it, you'll see more interesting details, like the tiny panel numbers, indicating the comic strip origin of Superman.  The first Superman story was a cut-up and rearranged comic strip that failed to find a syndicate, and Joe Shuster continued to number the individual panels even after Superman found a home in comic book form.
You'll also see the brutal thugishness of the Golden Age Superman as he literally throws some character named Gimpy out of town.
But the most striking detail is the complete absence of Superman's name from the cover of the issue.  No image of the character, no "Thrilling Superman Tale Inside!" cover blurb, nothing to indicate that the "Action" indicated by the title is anything other than some James Fenimore Cooper frontier combat.  Weird, huh?  We always think of Superman being popular from his very first appearance, but DC didn't necessarily know what it had during those first couple of years.
Plus, it makes me think about all the frontier action we're missing in comics these days.  Sure, we have Roy Thomas's adaptation of The Last of the Mohicans at Marvel, but once the current Viking fad plays out, can't you see the rise of the Leatherstocking genre?  It's been a long wait for those of us who fondly remember Action Comics #8.
Posted by Timothy Callahan at 8:01 PM 4 comments:

I want to thank Marc Caputo for being the first to comment on my return to blogging, and to honor him, I want to comment on his comic book observations in a dedicated blog post. Plus, nobody reads the comments anyway, as Geoff Klock has taught us. So here's what Marc said,

"Thor has continued to amuse and amaze - I've never been a JMS fan, but I'm getting to be.

Booster Gold is up there with All-Star Superman and Green Lantern as DC's best book and that puts BG in the lead for best new series. Johns has definitely hit a hew stride.

The X-books are pretty damn good leading up to Messiah Complex.

But, for me, the best thing about the last two months is the fact that a) the Superman books are back on track, b) there's been a new book every week in some way and c) the Legion arc in Action is shaping up quite well."

That's all well and good, Marc, for you to have opinions, but here's what I think:

Thor has been surprisingly good, although the ONLY thing that saved the most recent issue (#4 was it?) from the trash bin of cliche "perils of war" stories was the appearance of the Warriors Three. Which means that the issue wasn't actually any good, but it seemed good because, hey, the Warriors Three! Cool! But I have enjoyed Coipel's work immensely, and it's probably the least bad JMS I've read, which is a terribly backhanded semi-compliment, but there you are. JMS is the guy who turned the Squadron Supreme into a mopey snooze-fest about, ultimately, nothing. So, yeah, I'm not a big fan of his "approach" to superheroics. His Thor does give me a bit of hope, though, but, like all his work, it will probably be well set-up (and by "well," I mean laboriously slow) and then just kind of sit there. In other words, I hope the Warriors Three get to mess some shit up. And when Sif returns, watch out!

I really love Blue Beetle though. And I hated the first handful of issues. I'm glad I stuck with it.

The X-books, on the other hand, have just been pissing me off. If you look at my comic collection, and I suggest you don't, because that would be silly, you'd see my love/hate relationship with the X-Men titles over the years. I own chunks of the comics, usually with a couple of years missing in between. I was around for the end of Byrne and some of the Paul Smith issues, I bought it faithfully though Romita Jr, dropped it during Silvestri, picked it up for Lee, dropped it after that, have some later Romita Jr. issues, dropped it until Morrison/Quitely, ashamedly bought some recent Claremont just for the Davis art and then dropped it before Brubaker and Carey joined the party. And I hated the Peter David X-Factor relaunch. But I have been reading all the Brubaker/Carey stuff, and if you listened to the podcast you'd know that I've bought all of the crappy-Beast-wandering-around-sad-because-of-no-Mutants-crossover/non-crossover story which led up to Messiah Complex. I like a lot of things about the X-Men, but I really dislike anything with the Morlocks or the Reavers or anything Mr. Sinister-related, so I can't imagine that the Messiah Complex is for me. Yet, I didn't hate the most recent, New X-Men issue, even though I don't really know what that team's all about, and I'm going to keep buying it. We'll see if I can learn to love the X-Men again.

By the way, I kind of like Simon Dark. I'm surprised by that as much as you are.
Posted by Timothy Callahan at 12:23 AM 2 comments:

Back with a Vengeance!

I'm nearly done editing the Teenagers from the Future book, and I've been reading comics like crazy. I've even had a chance to catch a movie or two. Plus, I lectured at the Norman Rockwell Museum two weeks ago, and I want to tell you about that. Lots of stuff to talk about, pop culture-wise.

So, I'm back! I'll be posting AT LEAST twice a week, and I want to read your comments.

To get warmed up, let me ask you--what have you read or seen recently that was really great?
Posted by Timothy Callahan at 11:44 AM 3 comments: