I know I love finding out what people are reading, so I'm going to share my list of what I've recently finished and what I plan on reading over the next month or so. I hope it inspires you to read all of this stuff so I can have intelligent conversations with you instead of the normal small talk and chit chat that we call "conversation" but is actually just a facade to cover up your own insecurities and fears. Plus, you're pretty boring. Anyway, here's the list:

WHAT I JUST FINISHED:

Here They Come by Yannick Murphy. 30% great. It's supposedly a novel, but it's not. It's an extended short story with a nice prose style but little else. It's thin and underdeveloped and disappointing. Don't bother.

In Persuasion Nation by George Saunders. 80% great. You should read the whole collection anyway, because George Saunders is easily the best short story writer in the history of the universe. Or at least one of my top five favorites, anyway. Just read the book.

Assassination Vacation by Sarah Vowell. 45% great. The Lincoln chapter is worth the cover price. The Garfield stuff is somewhat interesting, but the McKinley section is dullsville (yes, I said dullsville because I am a beatnick all of a sudden, daddy-o). I really loved the Lincoln stuff though. Maybe you should just read that part, then return the book (perhaps use that thing they call a lie-berry).

Doom Patrol issues 19-63. 95% great. I'm writing about these issues in my Futurespective: Grant Morrison column at sequart.com. By the way, Sequart is sending me a contract this week so you just might see my book on the shelves in time for Christmas. (Ask Santa for it, because I ain't givin' you no free copy, sucker.)

Easy by Kerry Cohen Hoffman. 96% great. Kerry just moved to the Berkshires and I met her the other day. She'll be teaching some summer courses at Word Street and we're all definitely excited to have such an impressive writer join our crew. Her book, though, is excellent. It's marketed as a Young Adult novel, but I think it transcends that label without a doubt. You should read this book.

Solo issue 11, featuring the work of Sergio Aragones. 92% great. This series features a different comic book artist each month (actually, I think it's bi-monthly, but whatever), and collects new stories by just that one artist (hence, "Solo"). Previous issues have been fantastic, and this one is no exception. Sadly, the title has been cancelled, and it will end after issue 12. It's probably one of the consistently most entertaining and interesting comic books DC publishes, and they shouldn't cancel it. But sales suck, apparently, because people are idiots. So don't be an idiot. Buy it while it's still around.

On the video front, I also just finished the complete second season of Deadwood and the complete first season of The Venture Brothers. I HIGHLY recommend both. 95% great at least. Both series get better each episode and look so darn purty on my fancy TV. I like purty stuff.

WHAT'S IN MY TO-BE-READ PILE:

Atomik Aztex by Sesshu Foster. This was a Believer recommendation, and it's been compared to some other book I read that I'm totally blanking on, but anyway, something made me want to read it and the title is cool, so it must be good, right? I'll let you know.

Strong Opinions by Vladimir Nabokov. I'm actually about halfway done with this. It's a collection of interviews with Nabokov and it's no good to read in one sitting because some of the interviews are kinda similar. But spaced out, it's great, because Nabokov is a genius and probably the greatest novelist of the 20th century. No lie.

The Grove Centenary Editions of Samuel Beckett Boxed Set by Samuel Beckett, obviously. This is the four-volume hardcover collection that I am totally going to order as soon as I have some more money. I think I love the idea of the collection as much as I'm excited about the collection's contents, and it will probably take me a year to pace myself and read everything (I have trouble reading plays unless I'm preparing to teach them), but how can I resist such a nice set of books? I can't.

Mansfield Park by Jane Austen. I finished half of this and then got caught up in end-of-the-school-year stuff that made me set it aside. I started it because I plan on systematically reading everything that Nabokov covers in his "Lectures on Literature" book. This is just the first title he lectures on. I think Bleak House is next. That's gonna take me a while.

Uncanny X-Men Omnibus by Claremont, Cockrum, and Byrne. This thing is huge. Like 900 pages of oversized X-Men reprints from the glory days. I have probably read these stories back in the late 80's when they were reprinted in the "Classic X-Men" series, but my memory of the stories is imperfect. I can't wait to start reading them again in this much nicer format.

Alpha Flight issues 1-25, by John Byrne. I read a book of interviews with comic book creator John Byrne a month or so ago. Byrne used to be my favorite artist when I was a kid, but as he became more of a crackpot and his style loosened up, I drifted away from his work. After reading that book, I recalled why I liked him in the old days. In his prime, he was as good as anyone. I began looking on Ebay for complete runs of his various titles, and I picked up a few things like "Generations" and "Jack Kirby's Fourth World," but I was really interested in completing my run of his Alpha Flight series (which featured the one and only Canadian super-team). Well, when I stopped in Fantasy Realms to buy my comics this week, respected owner James Arlemagne (hey James) pointed out his brand new dollar comic bins, and sure enough, he just happened to have all the issues I was missing (which was a heap of issues--but getting them for a buck each was cool, especially when the average comic book is $3.00 these days). So, yeah, I'll be reading these issues soon.

For future video action, I plan on a lot more TV shows on DVD this summer. I don't really have a huge pile of movies on the agenda, though I'm sure I own plenty that I haven't seen (Malick's "The New World" and Clooney's "Good Night and Good Luck" probably top the list--I'll see them some day). I would like to catch up on my Justice League viewing. I own Seasons One and Two and I want to watch those episodes in order, and Judy and I plan on finishing up (if possible) the second half of the Buffy and Angel seasons (actually, I don't think we're quite halfway yet--we're around Season Five for Buffy, I know that). Judy loves the Whedon shows, and I haven't seen all the episodes, so that's our big geek TV project for the summer (and maybe next summer by the looks of things).

That should keep me busy for a while.

And if you have any recommendations for what else needs to be addded to my list, let me know.
Posted by Timothy Callahan at 1:12 AM 1 comment: 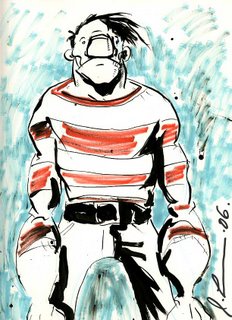 "Lost Dogs" creator Jeff Lemire sent me this crazy sketch after I praised his work on this blog (and e-mailed him with compliments). I guess the character's name is "Ulric" although I thought he was nameless in the graphic novel (maybe I just missed the part where his name was mentioned). Anyway, "Lost Dogs"=Good Stuff.
Posted by Timothy Callahan at 1:08 AM No comments:

Drawn on a Scrap of Paper Tonight 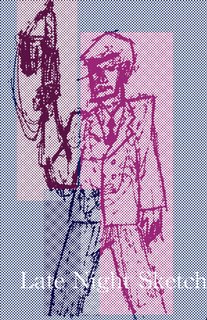 Posted by Timothy Callahan at 4:33 AM No comments: 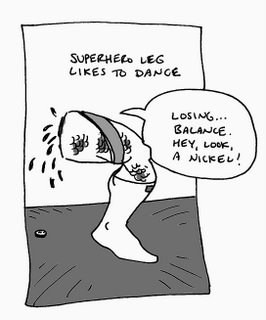 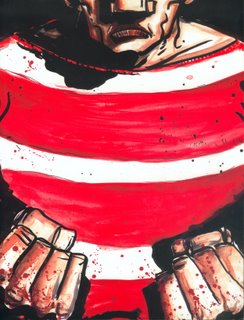 This is the best graphic novel I've read this year: "Lost Dogs" by Jeff Lemire (and I've read a lot of stuff this year--I like Scott Pilgrim and the Infinite Sadness a ton, but this is better). It's a haunting story about a man trying to do what's right. Just look at that cover. If that cover doesn't make you want to read the book then you won't understand the beauty of the book anyway, so don't bother. But if that cover looks intriguing, with its splashes of red and blocky composition, then you just might be cool enough to get what makes the book so special. Check out Jeff's website at www.ashtraypress.com to see more of his work (and a preview of his upcoming stuff).
Posted by Timothy Callahan at 12:53 AM No comments: 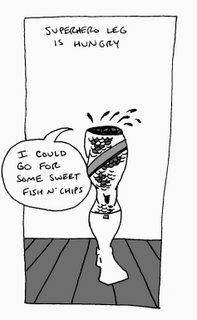 Posted by Timothy Callahan at 10:17 PM No comments:

I bought the first issue of MOME, the Fantagraphics comic anthology last summer at Comic-Con, and I enjoyed it, but I was a bit disappointed by it as well. I guess I was hoping to see an anthology with a lot of diverse work by different artists and each issue would be full of new and different creators. I was hoping for something like that Chris Ware McSweeney's issue, published every four months. Instead, MOME uses a regular group of artists who each produce one or two new things each quarter. So even though I liked the first issue, I wasn't excited about seeing just these same creators again and again. But I was wrong. After picking up issues #2 and #3 at the MoCCA fest last weekend, I realized that MOME is much more interesting and signficant than I originally thought. First of all, they have brought in a few new artists (like David B.) and the regular artists are producing some excellent work each time. It's such a nicely packaged book too. So, I've reversed my opinion. You should buyMOME. Regularly.
Posted by Timothy Callahan at 10:56 AM No comments:

Okay--I forced you to look at my glorious moustache long enough. Now that the school year's winding down, I can update this thing more often, so you can look forward to AT LEAST two updates a week beginning THIS WEEK and running all summer if not forever...

I have so many things to discuss. Like the old photos I found at my aunt's house--I stole a few and I will be posting them with commentary to trace the development of my awesome hairstyles over the decades. Also, I just got back from MoCCA fest and that place was hoppin' with comic book goodness, so I'll have to take some time to wade through all of my purchases, but I'll soon be posting some "hey, kids, comics!" alerts and reviews and recommendations. Plus, if you're lucky, I'll even post some fancy new drawings that you may not have seen yet--MoCCA fest certainly inspired me to whip out the pens and brushes and get to work.

Until then, check out the brand new Word Street website--I'll be back in a day or two with new stuff here.
Posted by Timothy Callahan at 10:57 PM 1 comment: