Each week, I try to carve out time to spend one hour a day sketching, building up a set of skills that should, we all hope, show improvement over a one-year period. Sometimes I'll draw by copying comic book artists, sometimes I'll draw from life, sometime I'll draw from how-to books, and other times, I'll just sketch with whatever is at hand. This is WEEK SEVEN of a 52 week experiment to see how well I can learn how to draw. 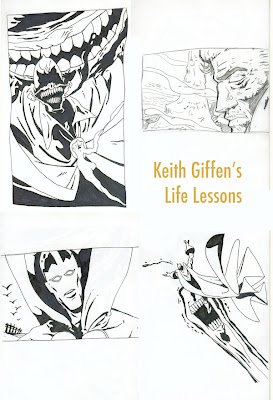 I could draw like mid-to-late 1980's Keith Giffen all day, every day. I love this stuff. This week's study comes from "Dr. Fate," a four-issue miniseries published in 1987, with art and covers by Keith Giffen.

I can't help wondering how much this comic influenced Todd McFarlane. Look at the way Giffen draws capes here. Look at the teeth in the upper left (and this miniseries is all about gods of order and chaos and lots and lots of giant teeth -- Kent Nelson even has a giant-toothed mouth in his belly for most of the story). This comic debuted during the same month as McFarlane's first issue of "Detective Comics," and about a year before Venom made his first appearance. It doesn't seem like McFarlane could have seen this comic before he started drawing Batman's cape with a zillion folds, shooting out in an expressionistic way, but the similarities are obvious. Maybe Giffen drew something else cape-heavy before this (though I can't think of what), or maybe they were inspired by Michael Golden's capes. I don't know.

What I do know is that Giffen's work in this Dr. Fate comic is some of my favorite art in any comic ever, ever, ever. It was a joy to sketch some studies of this stuff.

I had the most success once I just went straight into inks after roughing out some basic shapes. That's how I sketched the most detailed image on the top left: big, blocky shapes, then all rendering with pen and brush and sharpie. I love the look of it, and though the purpose of this year-long experiment isn't to fall in love with my own drawings but to learn and improve, I can't help but see how much the attention to detail -- and the layering of blacks and whites -- adds a sense of depth to what is an incredibly odd, almost abstract, but beautiful composition.

Yeah, man, I could wallow in this Keith Giffen glory forever. And I didn't even look at any Ambush Bug comics this week.

NEXT WEEK: I'm open to suggestions! Someone scratchy, maybe. Cowan? Sienkiewicz?
Posted by Timothy Callahan at 12:05 AM 9 comments: