This week, Chad recorded the podcast on his end, which made for a far better episode -- actually several episodes, delivered a few times this week in bite-size chunks of 30-45 minutes each -- and superior sound quality. My mic is too loud, but at least you can hear everything this time, as we talk about Greg Rucka's Batwoman, and a whole bunch of other stuff like, um, the Punisher? And more!

Things I Neglected to Mention in a Future Podcast: Article MCMLXXXIII

Our upcoming Splash Page podcast(s) may or may not feature a discussion about superhero morality, and I completely forgot to talk about Geoff Johns's "JSA" run, in which Atom Smasher (better known to those of use who used to read comics when they were AWESOME as Nuklon, the man with the stylin' mohawk) killed to prevent the death of further innocent victims. I think adding Geoff Johns comics to the discussion would have made Chad Nevett's head explode, so it's probably better that I left it out.

Nuklon, teaching lessons about superhero morality (and fashion) since 1983.
Posted by Timothy Callahan at 9:40 AM No comments: 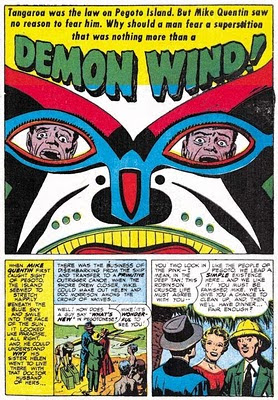 Posted by Timothy Callahan at 7:00 PM No comments:

The Splash Page, THE PODCAST, Episode One

As promised (or threatened), Chad Nevett and I produced a comic book podcast. A few things your should know:

1. Even though Chad and I have worked together for years, we have never spoken to one another until this recording.

2. My computer couldn't handle the awesomeness, and crashed at 8-10 minute intervals as we spoke about various comic-related topics.

3. So we completely lost our entire opening about "Joe the Barbarian" and "New Avengers."

4. And we lost plenty of other stuff too.

5. But it's not bad for a first episode, and I was able to piece together enough bits to make a nearly-hour-long episode out of whatever was saved from our discussion.

6. It's posted on the Geniusboy Live feed, so you can find it by searching for that on iTunes, though it takes about 24 hours to show up there after it's first posted on the feed.

Until then, you can listen to it HERE.

If you demand more episodes, we will try to make it happen. Somehow. With fewer technical difficulties.
Posted by Timothy Callahan at 4:51 PM 17 comments: 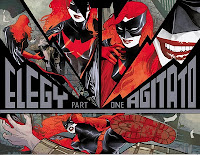 I devoted a "When Words Collide" column to my Best Comics of 2009, and I submitted that same list to CBR for their cumulative, democratically-determined "Best of" list. (Last year, the list I submitted was a bit different than the one I posted in my column, because of something to do with reprints being allowed or something -- I can't remember, but I know it was a slightly different list.)

The blurbs I submitted to the CBR list weren't all used, so here's what I sent in, for anyone interested:

2. Scott Pilgrim vs. The Universe, by Brian Lee O'Malley (Oni)
One volume away from the finale, O'Malley lets his protagonist grow up a bit, but doesn't leave the genre-smashing fun behind.

3. Detective Comics, by Greg Rucka and J. H. Williams III (DC)
The best artist in comics working off a pulpy Greg Rucka script? Yeah, this is the stuff.

4. Seaguy: Slaves of Mickey Eye, by Grant Morrison and Cameron Stewart (Vertigo)
This is a comic from the future sent back through time to make fun of the Disney buyout of Marvel before it was even announced. Also: it's gorgeous.

5. Pluto: Urasawa x Tezuka, by Naoki Urasawa (Viz)
Some have hyperbolically called this the "Watchmen" of manga, and that's not all that far off. But it's quieter than "Watchmen," and about a lot more than just comics.

6. Scalped, by Jason Aaron and Various (Vertigo)
Whether it's tight single-issue stories or expansive, series-long narrative threads, Jason Aaron is creating something special here. Frankly, it has ascended to become one of the best serial narratives ever.

7. Batman and Robin, by Grant Morrison, Frank Quitely, and Philip Tan (DC)
The first three issues are some of the best Batman comics ever. Frank Quitely is a master of comic-book-fu.

8. Punisher, by Rick Remender and Various (Marvel)
Giddily trashy, this would be the cult comic of the year if it weren't so unabashedly appealing to the mainstream. But this is still a subversive little gem of a superhero comic.

9. Wednesday Comics by Various (DC)
Pound for pound, penny for penny, you couldn't ask for a better weekly dose of comic book art. Worth the price just for the Karl Kerschl.

10. I Kill Giants, by Joe Kelly and JM Ken Nimura (Image)
A story unlike any other this year in a comic that didn't look like anything else this year. Engaging, powerful stuff from Kelly and Numura.

Overall, the CBR list was surprisingly diverse, and I think that's because of the lack of clear, consensus Marvel or DC picks -- "Detective Comics" and "Batman and Robin" were the only two superhero books in the Top 10. Last year, five superhero comics cracked the consensus Top 10. I also think the edition of the Robot 6 bloggers added some much-needed diversity, and "Driven By Lemons" wouldn't have made as much of an impact on this list without their votes, I suspect.

Basically, with each of us submitting our Ten Best, and with a lot of diversity of choices, it probably only took a few people to rank something in their personal Top 10 for it to rank in the Top 25 overall.

I've seen some criticism of the list already, and it's different than the criticism of last year's democratic picks. Last year, even I criticized the list for ranking mediocre superhero comics too high ("high" meaning "low," number-wise), while this year the criticism from the message boards is about the "obscure indie picks" in the Top 25, and the idea that these comics don't represent what was covered on the CBR main page throughout the year.

I wouldn't call most of the picks obscure -- some readers even named "Asterios Polyp" as obscure, which is just an ignorant statement -- but it is interesting to think about whether CBR has a responsibility to cover the best comics throughout the year, not just the popular ones. I'd love to see that, and with "Comics Should Be Good" and "Robot 6," plenty of non-Marvel and DC comics are discussed, but the reality is that the site is about mainstream, mostly superhero comics. That's the audience. When I write columns about "The Drifting Classroom" or reviews of "Powr Mastrs," that kind of stuff gets practically no hits. I write those things for myself, and to raise awareness. But they aren't the kind of profitable articles for CBR that something like my "Top 10 Geoff Johns" column was.

What do you think? Should CBR focus more on the "good" comics throughout the year and not just wait until the end of December to point out the best stuff? Is it a problem that the list doesn't reflect the bulk of CBR's mainstream emphasis? Is it a bad thing when a list makes you look up some new comics you may not have heard of? And in what universe is "Batgirl" even a Top 100 pick?!?