I was flipping through the channels yesterday and I caught a minute of the 1998 Matt LeBlanc vehicle better known to cinephiles everywhere as Lost in Space. When I saw Jared Harris on screen, everything clicked into place (I actually saw the entire movie in the theater when it came out, all those years ago, because time somehow moved slower back then): Jonathan Hickman's Fantastic Four run is entirely based on the 1998 Lost in Space film.

Cracked the code. Your move, Hickman.
Posted by Timothy Callahan at 8:31 PM No comments: 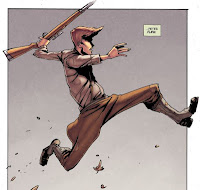 If Tucker Stone only wrote his hilariously scathing reviews on a chalkboard outside of Bergen Street Comics, I would be sure to make extra trips to Brooklyn just to enjoy his prose. I have obsessively clicked on The Factual Opinion some late Sunday nights, when I'm working on some column for a deadline, hoping that his "Comics of the Weak" would miraculously update, even though  half of the comics he writes about so savagely are ones that I regularly enjoy with unrestrained enthusiasm.

But somehow, shifting his weekly take-down of "mainstream" comics to The Comics Journal site has added a weird new dimension to his words. Because now, though his tone is exactly the same as it has been for years, his biting mini-reviews have the weight of authority behind them.

Coming as a weekly (or less-than-weekly, more recently) blog post on his own faux-haughty Factual Opinion site, Tucker's snarky vitriol seemed like harmless but gut-punchingly entertaining pub talk. The sort of ultimate example of how we might all like to rant about the terribleness inside the comics that we find ourselves reading. And if you've been following Tucker's writing over the years, it's seemed that some of his exaggeratedly vicious criticism has become less and less of a pose and more and more of an acceptance that, yeah, these comics are pretty much as bad as he's been saying. At least, that's what seems to be reflected from his point of view. Increasing disillusionment from a source that was barely illusioned to begin with.

The comments, though -- and I should know not to read comments ever, sure, yes, I know -- on his second-and-most-recent TCJ column. His newly-relocated "Comics of the Weak." These comments remind me that because The Comics Journal barely covers front-half-of-Diamond-Previews comics, Tucker's words are not only seen as authoritative about the individual comics he writes about, but they're also seen as representative of an entire massive subsection of comics. Tucker indicts all of "mainstream" comics by ridiculing his particular selections on a weekly basis, to an audience that seems reassured in its bias.

"Aha!" they shout. "We knew those COMIC BOOKS were unreadable all along. Why, we gave them up years ago to focus on archiving our Ernie Bushmiller collections and waiting for the new Alison Bechdel. Thank you, Tucker Stone, for reminding us that we no longer have to waste our time on nonsense."

It reminds me of the "Little Cinema" in the lower level of the small museum here in my town. My wife and I used to go there to see independent and art house films every month or two. And the place would always be packed with retired folks, and they would laugh at all the wrong parts of every movie and applaud at the end of everything, seeming to miss the point of what they saw but yet clearly entertained by every moment. They would, haltingly, scoff at any mention of the big summer blockbuster playing at the multiplex.

I think of that crowd when I read some of the comments underneath Tucker's new column. And I think of these shambling septuagenarians (or worse, their snarling adolescent nihilist pals) interpreting a few funny, too-true reviews as some kind of blanket criticism of everything that comes out of Marvel and DC and IDW and Boom and whoever else publishes comic books that have action and punching and explosions and important conversations about whether society hates the protagonists or fears them. And I think of those readers feeling safe in their choice of sticking with The Collected Nancy Artist's Edition and I hate them in their narrowmindedness.

Then I turn and begin to celebrate all the variety and genre-smashing comics that those readers might be missing if they let Tucker turn them away from everything that the "mainstream" comic book publishers have to offer.

But, sadly, I can't even muster the energy to do that. I can't advocate for Justice League International or Dominique Laveau or X-Factor or Peter Panzerfaust or even the comics I like. I like them, these days, the way I like Chocolate-covered Peeps and the doodles of Inspector Gadget in the corners of my notes for work. But I don't advocate for them, necessarily.

Tucker may be right after all, even if he doesn't mean it. (Though he totally does.) And I'll be obsessively clicking on TCJ.com, waiting for more.

Posted by Timothy Callahan at 10:49 PM No comments:

I Watched This Thing Called "Game of Thrones"

The place where I buy my comics is called "Fautasy Realms," according to the sign. That's no typo -- that's just an upside down, dot-matrix-printed "n" in the store name, officially.

Back when Fautasy Realms was called "Virtual Reality," the owner talked about George R. R. Martin a lot, specifically about the sense of realism in his "Song of Ice and Fire" series. That didn't make me want to read the books.

A few years ago, when rumors of an HBO "Game of Thrones" project started bubbling up, and everyone freaked out about how amazing such a thing would be, I looked into the books a bit, and then realized that George R. R. Martin was the same guy who wrote that thing in "Wild Cards" about the superhero who was also a Volkswagen Beetle or something. So I stopped looking into the books.

Then, a bit before "Game of Thrones" actually premiered on HBO, I heard Sam Humphries, who I respect greatly for his wit and wisdom (long before he was a superfamous Marvel Comics Writer Extraordinaire), say that he loved the "Song of Ice and Fire" series even though he HATES ALL THINGS WITH ELVES AND SWORDS AND WIZARDS. So I bought "Game of Thrones."

I don't have HBO.

I tried to read "Game of Thrones" on a family cruise last summer, but I couldn't remember (or care to remember) all the characters in the opening 50 pages and I decided to read every New Mutants comic instead. I think I made the right choice.

I tried reading "Game of Thrones" again over the winter, and I got 150 pages into it, and I liked that Tyrion guy well enough but, let's be honest...it's a sleazy book, isn't it? Super sleazy, with incest and underage barbarian marriage-rape and mostly just a lot of pages that are like all the boring bits of "Lord of the Rings" without all the monsters and wizards and fancy obsession with British cuisine and pipe smoking. Also, it was just about the most plodding mystery story ever. Starring a guy named Ned.

Halfway through, I still thought it was sleazy and dull and yet the performances were strong enough to keep me watching and it looked nice all wintry and fur-lined and swordy.

But by the end, I wanted to know what happens next.

So I bought "A Clash of Kings." I have read the first two chapters. I think maybe I should go read all the "Youngblood" comics instead.

Though Boromir was pretty good in all those TV episodes. Too bad how it turned out for him. He'd make a good Chapel in the big-budget Youngblood movie. Boromir for Chapel. 2012! 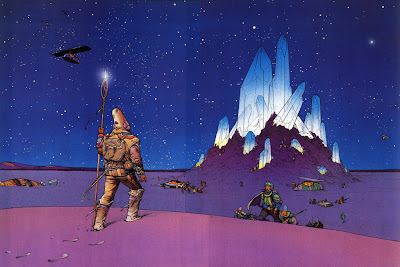 Sean Witzke says it better than I ever could: Jean Giraud/Moebius 1938-2012.
Posted by Timothy Callahan at 10:11 PM No comments:

Hey, I never posted the Best Comics of 2011 here at this still-not-abandoned blog. So here it is, for the ages.

I spent two weeks of "When Words Collide" over at Comic Book Resources running down my Top 30 list, so if you want the capsule explanations and/or justifications for the entire List o' Thirty for Twenty-Eleven, that's the place to go. First go to BEST COMICS OF 2011: THE RUNNERS UP then finish strong with THE TOP TEN COMICS OF 2011.