Yeah, I didn't sketch at all last week. Well, that's not exactly true. I did draw out some character sketches for a top-secret project Television's Ryan Callahan and I will be working on in 2011. But I didn't draw any Keith Giffen sketches like I wanted to.

Too much Christmasing! I'll be back next week with some studies of Giffen!
Posted by Timothy Callahan at 11:55 PM No comments: 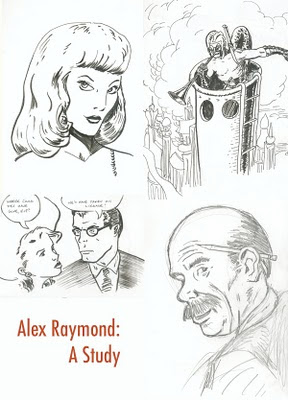 I bought a new sketchbook last week, not because I had filled up the old one, but because the old one was an unwieldy, sewn-binding, cloth-covered thing that wouldn't stay open very well for sketching and scanning.

The new one is wire-bound and smaller, easier to carry around and use and scan.

I did draw a few "Flash Gordon" sketches in the old book, but now I can't find it. You'd think a giant blue book would be easy to find, but I guess it's not. Especially when you have thousands of books it could be mixed in with.

So here are some images from the new book. Mostly inked with a practically dried-out brush pen. The two on the top from studies of the Checker "Flash Gordon" reprints, and the bottom two from the second volume of IDW's "Rip Kirby" hardcover series.

What struck me about trying to draw from the "Flash Gordon" strips was how hard it was to see what Alex Raymond was actually doing, through the years of degraded quality and then the imperfections of the Checker reprints. (It's like a color xerox of a color xerox, of a shoddy printing job to begin with.) Plus, I'm sure Raymond worked much, MUCH larger than print size, and the panels in "Flash Gordon" are tiny.

Another thing that struck me is that though my memory of Raymond's Flash work is that he had classical figures and imaginative scenery, when I was looking at the architectural designs I was surprised to see that his fantasy backdrops were almost Dr. Seussian. His backdrops had an organic strangeness that contrasted with the almost-Renaissance figure work. I know "cartoonish" can be a derogatory term, but in this case, Raymond's cartoonish quality helped to create a sense of wonder in his alien landscapes.

Contrast that with the bleak photorealism of "Rip Kirby," and it's as if there are two Alex Raymonds, each with a major impact on the look of comic books (and comic strips, of course). Obviously, Dave Sim has spent the better part of two years exploring the Alex Raymond photoreal style in his own study of the genre (or artistic mode), but I'm sure much more can be said about how much Raymond's "Rip Kirby" style impacted the look of late Silver Age and Bronze Age comics. That's not what I'm interested in doing here -- I'm interested in drawing and seeing what comes out of my pencil and inky tools -- but someone could tackle that topic, I'm sure. Maybe someone like you.

Me, I'm content to sketch away and leave such heady discussions for other parts of my life. Like writing Monday columns for CBR. Or arguing with Ron Marz and Dean Trippe on Twitter.

NEXT WEEK: Speaking of xeroxes of xeroxes (and after reading last month's "Doom Patrol" and "The Outsiders," and talking to Joe Casey about unpublished 1980s comics) I'm thinking that I might want to dive into some Keith Giffen. Maybe mimic some of the different phases of his career and see what it looks like filtered through my pencil. It just may be a very Ambush Bug Christmas!
Posted by Timothy Callahan at 12:05 AM No comments:

Each week, I spend one hour a day sketching, building up a set of skills that should, we all hope, show improvement over a one-year period. Sometimes I'll draw by copying comic book artists, sometimes I'll draw from life, sometime I'll draw from how-to books, and other times, I'll just sketch with whatever is at hand. This is WEEK FOUR of a 52 week experiment to see how well I can learn how to draw. 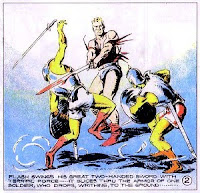 This week got the best of me, and I did very little sketching. I don't have anything to show off, though I did study and copy about half a dozen Alex Raymond drawings from "Flash Gordon." But since I want to spend more time with Alex Raymond, and get into his "Rip Kirby" stuff too, I will make this a two-week session with Raymond. Me and Alex Raymond for 14 days, some of which will be spent sketching! Look for some of my attempts next Monday.
Posted by Timothy Callahan at 1:07 AM 2 comments:

This week's special episode of The Splash Page podcast features Chad Nevett and I talking about comics and Doc Savage and other amazing topics. And, oh yeah, Joe Casey joins us for the entire three hours.

He tells us about "Butcher Baker" and a million other things, like what it was like to work during the golden age of Wildstorm, how comics criticism is often better than actual comics, and the secret work of Bob Fleming and Keith Giffen.

Each week, I spend one hour a day sketching, building up a set of skills that should, we all hope, show improvement over a one-year period. Sometimes I'll draw by copying comic book artists, sometimes I'll draw from life, sometime I'll draw from how-to books, and other times, I'll just sketch with whatever is at hand. This is WEEK THREE of a 52 week experiment to see how well I can learn how to draw. 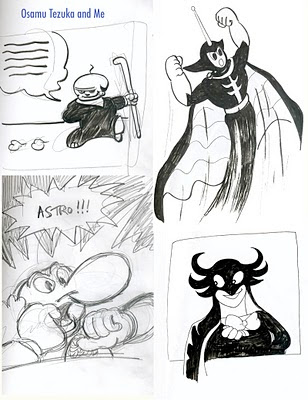 Boy, I do not have an affinity for this stuff at all. I figured I would stretch myself and play around with some manga images this week, and who better to look at then Osamu Tezuka? I have had a love/not-hate-but-indifference relationship with his work over the years, with a fondness for his stranger comics but a real lack of interest in his more popular work (like "Astro Boy," which I can appreciate as a cultural institution, and as the basis for "Pluto," but I really can't read for any sustained period without completely spacing out).

But Dash Shaw's recent "Comics Comics" post on the Tezuka art book, and the documentary included, in particular, reminded me that I need to give Tezuka some more focused attention, and the documentary is a fascinating look at the grind of producing comics, even when you are a master of the form. (I picked up the book and the documentary immediately after reading Shaw's post, because I have no impulse control when it comes to awesomeness.) I also just happened to watch the brief CBR TV interview with Keith Giffen, who draws nothing like Tezuka (though I need to do a WEEK OF GIFFEN during this year of Sketchblogging, I think), and he refers to mainstream comics as "volume work," which is just about the most accurate and concise description I've ever heard for the kind of stuff pumped out by Marvel and DC. That doesn't mean that quality can't exist, but the name of the game is volume, it's about producing, feeding the fans, and that's really the point.

So, yeah, back to Tezuka. Even though I have the Tezuka art book and a variety of other work by him ("Black Jack" and, especially, "Dororo" as my two favorites, probably), I decided to focus my sketching this week on the third Dark Horse volume of "Astro Boy," just to see what happened when I took Tezuka's tiny panels and blew them up in sketch form.

I couldn't get Astro Boy right, ever. Not even close. He's just a few basic shapes, but he looked like a demented teddy bear every time I tried to draw him. And I was fascinated by the weird abstractions Tezuka would use as he cranked out these pages (if his work schedule in the documentary is to be believed). That sketch on the top left is based on a panel from the final story in the book, and that's really how Tezuka drew that guy's right arm and leg. Just these humps, these blobs of shape. His version looks more jaunty and has more movement than mine, because, as I said, I can't help but do demented versions of Tezuka. I have no sense of the fluidity of his line -- or I can't come close to replicating it -- and my ability to draw "cute" is completely nonexistent. For now at least.

(I was going back through the Gary Panter Picturebox massive book o' goodness last week, because it's amazing, and Panter talks about how he could never get away from the cuteness of his style, and he eventually just figured out that he had to embrace it. I clearly do not have an affinity for cute in my own sketchbook, even though I like it when I see it.)

Maybe I'll come back to this kind of proto-manga approach at the end of the one year experiment and see if I can pull off Tezuka's seemingly simple style with any kind of accuracy. Clearly, I have a lot of work to do.

NEXT WEEK: I don't know. Maybe I should take Guglie's advice and dig into some Alex Raymond. Guglie knows what he's talking about!
Posted by Timothy Callahan at 12:05 AM 5 comments: