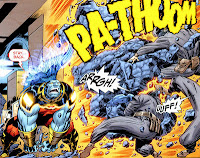 I talked to Keith Giffen the other day, doing research for another project I'm working on, but later in the conversation he started recounting his experiences on OMAC, a project he clearly enjoyed, and because OMAC has absolutely nothing to do with the article I'm writing, I figured I'd share what he had to say about the series here, since it's turned into process week at old Geniusboy Firemelon productions.

Giffen talked about how he never outlines or thumbnails what he's drawing, and on OMAC, he would take Dan DiDio's plot and then, he says...


I would go through the book, and, up front, I would do the panels that I don’t want staring at me when the deadline’s tight. I call them the ‘kitchen sink’ panels, the two-page spreads, whatever. Get that out of the way. So I work out of order now, but I still don’t outline. I’ll have page 14, and page 18, and page 20, and now it’s time to put them together.

So, without knowing what he's actually going to draw on pages 1-13, 15-17, and 19, he drew the other pages based on where he thought the big images should go. Then he filled the rest in, almost improvisationally, following DiDio's plot, unless he decided to throw something else in for fun, like when Superman appeared, just because Giffen thought he should pop into the story.

OMAC's long gone as a New 52 series from DC. But it was fun while it lasted, and Giffen's energetic improvisation was the major part of its charm.
Posted by Timothy Callahan at 12:36 AM No comments:

Charles Forsman: On His Process and Paper Over Digital 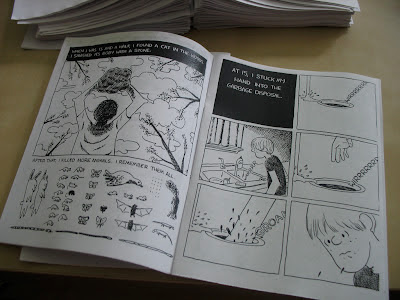 I wrote my upcoming "When Words Collide" column as kind of a feature article about Charles Forsman and his new microcomics publishing venture. Well, I suppose it's about more than that. It's like Forsman's comic book life story, and everything that led up to him working in Hancock, writing and drawing books for Fantagraphics, while he pumps out Risograph-printed minicomics by a bunch of talented artists. Look for it on Monday at CBR.

But our conversation led in a couple of directions that didn't end up fitting into the column, so here are some outtakes that didn't make it into my piece. First, Charles talking about his process: 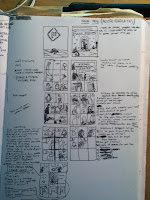 It usually does start with writing, usually in the sketchbook. It starts with paragraphs of what’s going to happen, maybe. Then I break that down into chapters, with further description, and then I use that one page in a sketch book, for TEOTFW, and I work very teeny tiny in there.


A lot of cartoonists draw and redraw and do several drafts, full size…and I’ve been more laborious with my work in the past…but with this I’m more worried about just telling the story and not drawing fancy.

Even the original art is small to keep things quick.
I’ll do thumbnails so tiny no one else can read them, and I’ll put the dialogue outside. Jason Lutes shared his process when he was at CCS. He has two little boxes for a page, on one sheet of paper, and he’ll write the dialogue outside. So that’s how I’ve been working recently.

It always changes from project to project. Sometimes I’m loose, and sometimes I need more structure, but that sort of idea is what I stick to. Quick thumbnails. Because I feel it keeps the spontaneity. I don’t like to labor over it too much, because I feel it makes things too stiff.

And here's Charles responding to me when I said something like: "Most people today, if they wanted to do draw something quick and spontaneous for fun, and get it out to readers, would just do a webcomic. But you seem to reject that idea and spend all this time making small physical copies of your comics. Why not just do it all digitally?"

I personally can’t read stuff on the screen, at my computer.

The way I tell stories, I need that page. I have so much trouble just determining a trim size I’m going to use. With a computer there’s so many options. I could do full color…it just feels too unlimited. I respond to limitations a lot better. It’s almost like a challenge to tell what I want to tell and do what I want to do in eight pages.

The thing that I discovered…serialization is just -- the type of comics I do, everyone’s worried about the graphic novel, with one big story….small publishers aren’t printing them any more. Nobody’s buying them. It wasn’t something I even experimented with, until I accidentally did it with this series. All of a sudden, I was having cliffhangers, and it was really fun. And people were coming back month in and month out. I know serialization still goes on with the superhero comics, but it was something I felt like I had to rediscover for myself. It seemed like something that was gone from my comics scene. And I love it. It makes me sad that it’s not around anymore.

There’s that romantic idea of comics being a throwaway artform, that I still kind of like. I like that it’s just a dollar and that it’s on copy paper and it’s not something to really cherish. I really respond to that, that you can tell a great story without high production values.


I really like what Charles and his friends are up to, and Oily Comics is definitely worth checking out.
Posted by Timothy Callahan at 8:00 AM No comments: