The Advent of the New Awesome: San Diego Comic-Con 2009 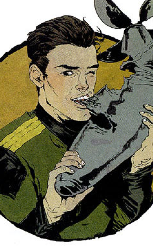 This week's "When Words Collide" recounts my five days of adventure at SDCC 2009 (or CCI 2009, if you want to be accurate). Thrill to my breaking and entering exploits, my reckless convention floor non-buying behavior, and my celebration of all things awesome.

Read it, comment upon it, live it.
Posted by Timothy Callahan at 9:59 PM 4 comments:

Brian Michael Bendis showed up in disguise so as not to attract attention: 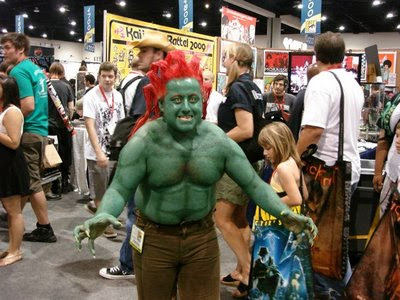 Geoff Johns ruminated on the greatness of Grant Morrison, on camera, for all the world to (eventually) see: 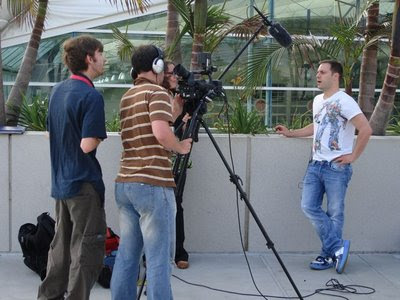 They trotted out Castle Grayskull last year, too. I wonder what happens to it between Comic Cons: 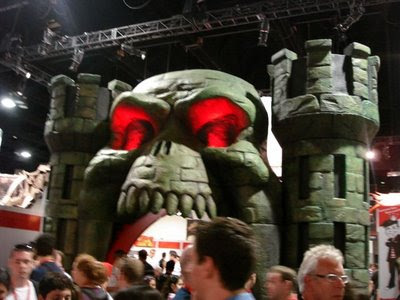 Jeff Lemire and Josh Dysart read this blog every day and beg me to include more photos of them. So I do: 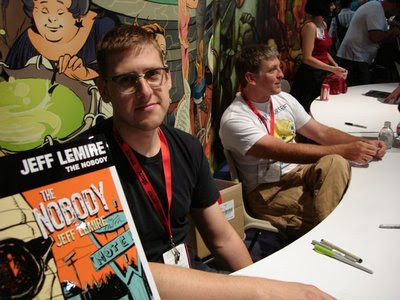 Special feature on the blu-ray "Watchmen" two-disc set. These three show up at your house and punch you in the face: 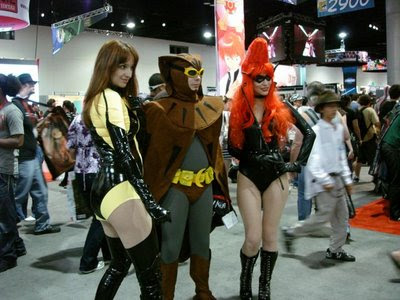 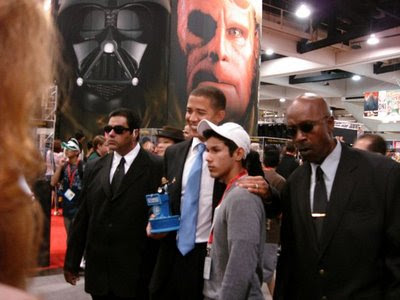 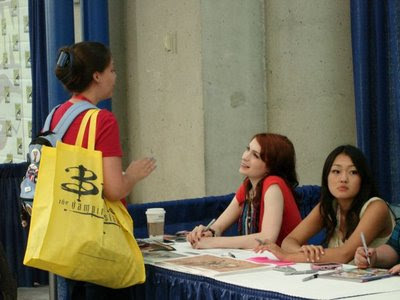 Did you take the picture yet, I ask? No he did not, apparently. 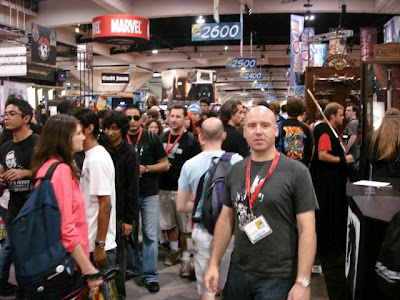 Jonah may have won the Eisner for CBR, but Dean Trippe and I take all the credit whether we deserve it or not. You can't stop us. (Jessi Awesome's legs can't even get between us and our coveted Eisner.) 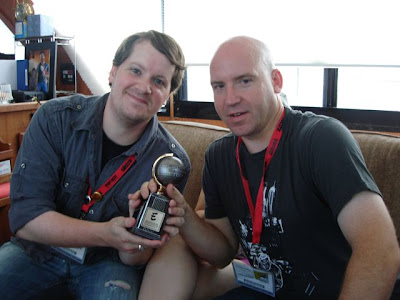 Jason Aaron wears his limited edition Morrison tribute glasses while talking about how his favorite comics are ones called "X" and "Men" and written by Chris Claremont: 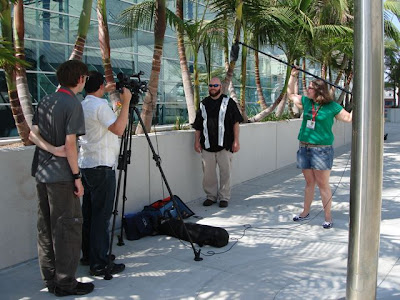 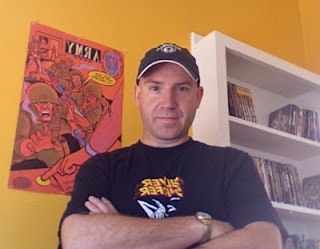 I don't have a San Diego schedule, suckers! I'm on vacation, going to the convention with Television's Ryan Callahan for pleasure, not profit. Though I'll thrill you with tales of my adventures in Monday's "When Words Collide" column.

And I'm interviewing Matt Fraction for a documentary.

And I'm being interviewed for a different documentary.

And I'm meeting with an editor who is interested in having me join a new publishing line.

Other than that -- no plans! I'll see you all in San Diego. And for those of you who can't make it, follow my Twitter feed for constant updates from the floor. As I have fun all week long.

(This is photo was taken in a quiet little corner of Television Ryan Callahan's new pad. Check out that Michael V. Bennett "Army Men" artwork!)
Posted by Timothy Callahan at 3:21 PM 7 comments: 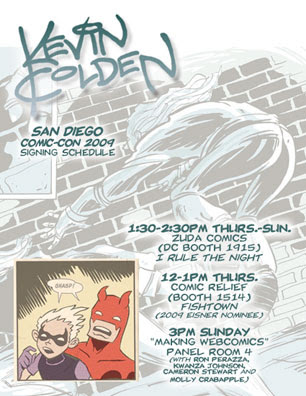 I'll be stalking Kevin all weekend, and I hope you will be too.
Posted by Timothy Callahan at 10:42 PM 20 comments: 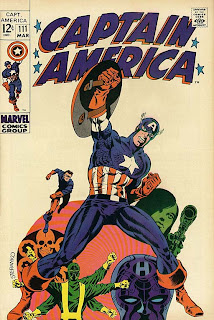 As part of my Great Comic Book Reorganization efforts, I'm selling some comics on eBay!

You want some classic Jack Kirby Silver Age action? You can get it.

Jerry Ordway and Todd McFarlane? Um, yes, but this list gets less impressive as it goes along, doesn't it. Yes!

Anyway, I offer a link to my aBay auctions because I want to sell this stuff to people I love and admire. Bid away, my friends, and if you're a Geniusboy Firemelon regular and you end up winning any of these auctions, let me know, and I'll throw in some other free comics as a bonus!
Posted by Timothy Callahan at 5:30 AM 17 comments: 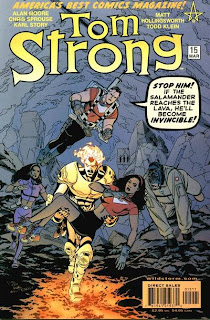 The title of this post doesn't make any sense, but I couldn't think of anything else to use, so I figured I'd come up with something to start a blood feud between CBR's George Khoury and myself.

It's on, George Khoury. Bring the pain!

Okay, what this post is about is something much more mundane than Alan Moore's current relevance or my imaginary war with George Khoury: it's about sorting comics.

I'm literally in the midst of thousands of comics. They surround me, here in my geek lair, as I try to somehow make more space by putting all of them in unwieldy longboxes. I don't know how the physics on this kind of thing works, but I somehow think that if I take these piles and piles of comics that have been building up and slip them into my already alphabetically-organized collection of comics, I'll somehow have space to walk around and, I don't know, own other things besides comics. It's doomed to failure, I know, but I just can't leave these piles all over the place. One false move and I could lose a child in this mess.

So, here's my question for my faithful readers. How do you organize your comics? Specifically, do you organize them by title or by creator? Because what I've found is that I have my gigantic stacks of alphabetized long boxes (by title), a couple of Grant-Morrison-only boxes (that I separated when I was writing the book, and then just kept separate for convenience), three "Legion of Super-Heroes"-only boxes (same reason), and then piles and piles of comics I've purchased over the past two or three years (some of those "piles" have ended up in random longboxes, but completely unsorted, just to get them out of the way).

But my new system this time is to create more creator-specific boxes (or parts of boxes), because I find myself referring to some comics far more than others. Alan Moore's an obvious example, and it really doesn't make sense to have my copies of "Top 10" and "Miracleman" mixed in with incomplete runs of "Tailgunner Jo" and "Monsters on the Prowl." So, that would give me easier-to access Alan Moore comics. I've done the same with Matt Fraction, rounding up my scattered "Uncanny X-Men" issues just so I could write things that would make Ultimate Matt mad, and I've done the same with my Jason Aaron comics , pulling all the "Scalped" issues and "Ghost Rider" issues (and other sundries) into a single box.

Who else would you isolate and box separately? I'm doing it for Ed Brubaker, too, I think. Well, I guess I AM doing it, since I've kept his comics in a separate pile as I sort and alphabetize everything else. Garth Ennis gets his own box, basically on account of "Preacher" alone, but it will be nice to have his war comics and "The Boys" all in one place. Warren Ellis gets a box. So does Joe Casey. Mark Millar does too, as frustrating a writer as he is, because I can imagine doing some kind of retrospective on his work or referring to specific runs more than once.

Who else might you separate? Would you give Bendis a box or ten? Azzarello? Gaiman (even though I sold my "Sandman" comics years ago and have his good stuff in collected editions)? Kirkman? Giffen? Would you do it by artist? The more refined you get with a creator-based division, the more runs you break up and then it's hard to find that issue of "Jonah Hex" you were looking for because you can't remember which artists drew it without looking it up online and cross-referencing it with your collection.

What's your system, if you have one?
Posted by Timothy Callahan at 1:06 AM 28 comments:

Cry For Justice: The Remixes 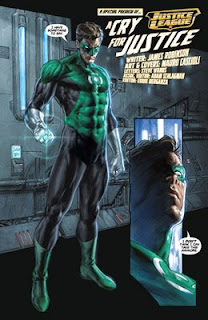 Believe it or not, I don't exactly agree with Doug Zawisza's baffling five-star review of "Justice League: Cry for Justice" #1.

But I do agree with THIS.

"Cry for Justice," indeed. James Robinson may not live this one down.
Posted by Timothy Callahan at 4:24 AM 9 comments: