I was teaching a writing course at Word Street tonight, and I was talking about generating story ideas using public-domain literary/historical characters. Then I said, to illustrate what NOT to do, "You don't have to do something ridiculous like pit Ahab vs. Jack the Ripper in Central Park..." and then I caught myself and told them that was such an awesome idea that they couldn't have it because I was definitely writing that story myself. I'm not actually going to write that story, but you can imagine how awesome it would be. Then I thought about it some more on the way home and realized that you could act out your own version of the story in three simple steps: (1) Purchase Ahab and Jack the Ripper action figures from ebay; 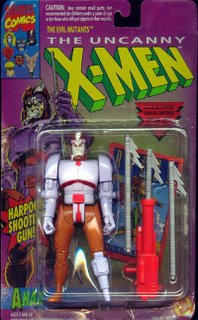 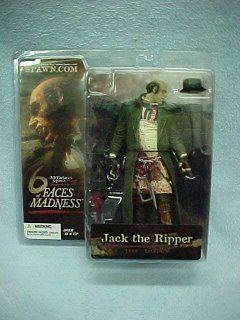 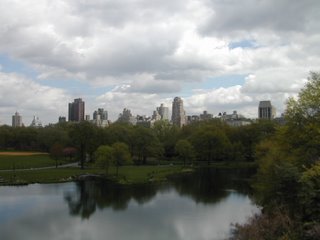 and (3) Crush the puny whore-killer beneath the cybernetic peg-leg of the mighty Ahab! I've provided pictures to set the scene--you can do the rest.

Prepare to Have Your Mind Blown

Here it is: my Sequart column that will make you smarter!

ZENITH: PHASE ONE
Posted by Timothy Callahan at 8:52 AM No comments: 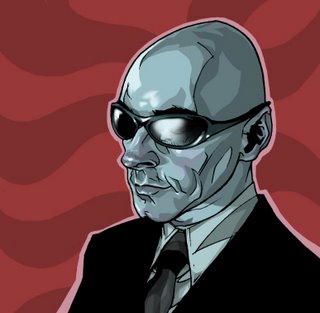 The first analysis column will go live on Monday (3/27), and from then on it will begin its weekly run for as long as I have stuff to write about (which will be years). Check it all out on Monday and let me know what you think about the column, about Grant Morrison, and about anything else on your mind.
Posted by Timothy Callahan at 12:11 PM 1 comment:

I'm in the mood for a nice, tasty Top 10 List. I'll throw this out there and you can tell me how wrong I am and reply with your own list (even though we all know I'm right pretty much all the time, but I'll humor you).

So here are the TOP 10 SUPERHERO CARTOON SHOWS OF ALL TIME:

10) The Adventures of the Galaxy Rangers
This is not really a superhero cartoon, true, but it's cowboys in space with laser blasters. To be honest, I remember liking this show quite a bit, but I haven't seen it in years. There's at least one DVD of this, but no full seasons or anything good, so I haven't bothered to pick it up. I do remember that some of the characters have mustaches, and therefore it is even better than Star Wars. Wouldn't Tarkin have been all the more menacing with a nice handlebar mustache?

9) Space Ghost
No, not Space Ghost Coast-to-Coast. That show may be funny, yes, but it features neither Jan, Jace, nor Blip. Not that I like those characters at all, but I do like Gary Owens, and I like when Spacey turns invisible and then blasts stuff with his wrist. That makes me happy.

8) Spider Man and His Amazing Friends
You know how kids always confuse The Silver Surfer with Iceman? Well, this show taught me the difference between the two, and therefore it is not only entertaining, but highly educational. Plus, didn't their dorm room (or whatever) transform into a superhero HQ by walls spinning around and the desk flipping over? Did that really happen? If not, it should have. Remember that one episode where Dr. Doom get the power to change reality by making wishes? Neither do I, but that sounds like it could have been an episode, right?

7) Thundercats
Panthro had nunchuks. What else is there?

6) The Herculoids
This was a show I could only watch when I visited my Grandfather's house on Sundays--actually, that's true about Space Ghost too. We didn't get that Hanna-Barbera channel. But I do remember Gloop and Gleep, but I was baffled by their uselessness and their similarity to the Shmoo, who was seen in those days with Fred Flintstone on some horribly-conceived show. But the Herculoids? They have a Triceratops that shoots out energy blobs. Therefore, they rule.

5) Superman: The Animated Series
At one point in my life, possibly the other day, I would have argued that this mid-90s version of Superman was a better show than Batman: TAS. My theory was that it's easier to do Batman--he's got a better cast of characters and you don't have to do much to make him cool. Superman, on the other hand, has Luthor and Brainiac and that's about it for villains. And he's so perfect and dull, he's hard to do well. This series does it well. Largely because they take a Jack Kirby approach to the whole shebang. It's probably not as immortal as the Batman series, though. True.

4) Challenge of the Super-Friends
This is the one with The Legion of Doom. Obviously the comic book series Justice, the new JLU storyline, and the roster-tastic Secret Society of Super-Villains series all owe a debt to this cartoon. I have watched this show recently on DVD and it's still great. It's preposterous, the characters lack depth, and there is almost not attempt at internal continuity, but its still awesome. Wicked awesome.

3) Batman: The Animated Series
So yeah, I'll admit, it is better that Superman: TAS. It has more classic episodes, and it's more stylish. I'm not a fan of the pixie-revamp that went on in the Third (?) season, where everyone became pointy-looking and darker, but overall, this is obviously the right way to do superheroes. When the series is ten times better than the Batman comics of the time, it's clearly a work of genius.

2) Aqua Teen Hunger Force
I have Mooninites socks. That I wear.

1) Justice League Unlimited
This show gets the number one spot for three reasons: (1) it's ending soon, so I'm appreciating it all the more in its final weeks; (2) It's cool; (3) It features an insane amount of characters, famous and obscure and it makes me happy when I can name them all and tell my wife and children who's who and what their powers are. They don't listen to me, of course, but I make them listen. I make them listen. I make. Them. Listen.
Posted by Timothy Callahan at 10:16 PM 3 comments: 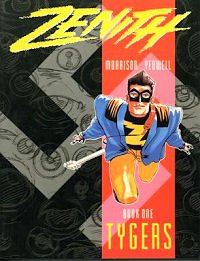 This Grant Morrison column is already kicking my butt. The first real post is due by the end of the week, it's supposed to be around 1,000 words, and it's supposed to cover Zenith in its entirety. Zenith is broken up into 4 Phases, and I've combed through Phases One and Two so far, found a ton of stuff worth writing about (21 pages of notes so far!) and I'm only halfway done (not even halfway really, since Phase Three is the longest section by far).

The reason I'm writing this column is to force myself to produce chapters which will then form a book about Grant Morrison. Since I see it as a book project, I'm going into the text deeply, but because the column is due every two weeks, and is supposed to be relatively short (I could easily write 10,000 words on Zenith, but would anyone want to read that much? Probably not. Would I have time to produce that much by the deadline? Definitely not).

By the way, the picture of the Zenith collection shows a swastika in the background because in Phase One, Zenith FIGHTS a resurrected Nazi villain. Plus, the swastika symbolizes something else in the context of the larger story, but you'll have to read my column at Sequart.com next Monday to find out what (if I have room to fit that explanation, that is).
Posted by Timothy Callahan at 8:14 AM 4 comments:

So I am now a bi-weekly columnist at sequart.com which is a site devoted to the "serious study of comic books and graphic novels." I met the guys who run the site when I was at the NYCC, and they invited me to submit something to them. I decided to bring my Grant Morrison obsession to the fore and submit a regular column analyzing his major work. And they liked it, so now I'm officially a columnist.

The column is called Futurespective and you can read the first column here.

Check it out, let me know what you think.

From now on I will be charging $10 for you to take a photo with me because I'm so friggin' famous.
Posted by Timothy Callahan at 1:36 PM 3 comments:

If you haven't already picked it up, go get Warren Ellis and Stuart Immonen's "Nextwave," published by Marvel. Issue 2 is out now, but unless your retailer had the foresight to order this thing properly, it will be gone soon (and I'm sure issue 1 is long gone), because this book is the best comic out this week.

It's got a theme song--there's a link to it here: Nextwave preview!

Here are the lyrics, and if they don't make you want to read the comic, then you should just give up on trying to be cool:

Dirk Anger
Is one crazy mamma-jamma
He leads HATE
Sitting around in his pretty pink pajamas
HATE was formed
By the Beyond Coporation
Purposely
To bring about catastrophic devastation!

Don't call your mom or your doctor,
Just pick up the phone and call!

Give us a NextWave rollcall!

MONICA!
Is gonna microwave your (whistle)
TABBY!
Is gonna steal all your stuff!
AARON!
Is going to organize your sock drawer!
ELSA!
Is gonna speak with an accent!
THE CAPTAIN!
His name is The Captain!

For God's sake, somebody call NextWave...

Issue 2 has Fin Fang Foom threatening to put the good guys in his pants.

It's funny and full of 'splosions (the issue, not his pants).