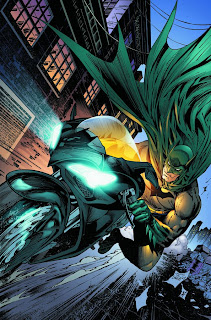 Here we go! Now, Morrison's run is back on track after that weak, WEAK Ra's al Ghul non-event.

In Batman #672, Morrison returns to the patterns and themes he established when he took over this comic last year. The multiple-Batman plotline continues here (something that began with the false Batman shooting the Joker in the face in the opening scene of Morrison's first issue), and the Black Casebook stuff gains more prominence, especially at the end of this issue, with "Zur En Arrh" reappearing and a surprise appearance by non other than Bat-Mite! Yes, Bat-Mite.

One of the things Morrison's doing in this Batman run is re-engaging with the character's pre-Dark Knight past. Morrison's brought back the Batmen of All Nations (who debuted in 1955), "Zur-En-Arrh" (the planet of Super-Batman, which debuted in 1958), and now Bat-Mite (from 1959). He's tried to establish Bruce Wayne as a Neal Adams-era "hairy-chested love god," and he's done a pastiche of Denny O' Neil's 1978 prose story, "Death Strikes at Midnight and Three." I'm sure I'm forgetting more than a few artifacts from Batman's less grim and gritty past that Morrison has thrown into the mix, but the point is that Morrison is expanding the context of Batman by pulling relatively obscure ideas from Batman's past and building it into a contemporary narrative. And that's always fun to read.

An additional thought: I don't know who Branca and Muller and Vane are, but perhaps they're part of an obscure Batman story as well. On the other hand, Muller (who, it turns out, is the guy we've been calling Bane-Bats) might be a play on "Miller," as in "Frank Miller" (the Bane-Bats is a bulky, vicious incarnation of the caped crusader, after all), which would tie into Geoff Klock's theory that Morrison's Batman and Miller's All-Star Batman are in dialogue with one another. I don't know who Branca would be in that case, but "branca" means "branch," and comes from a word meaning "paw," so if anyone knows a famous creator closely tied to Batman who has a name like that, let me know. (Or could it simply be that "Branca, Muller" equals "Frank Miller"?)

And now I'm even more annoyed that my shop in London won't be getting this week's books until Monday. Especially since I'm Windsor again, home of the shitty comic shops. *sighs*