Just Outside the 20: Wisdom

Here's another book that I liked quite a bit--I kind of loved it, actually--but not enough to list it in my Top 20 of 2007. It's a good comic and you should check out the trade. 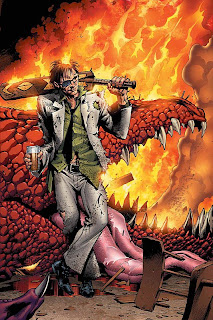 Wisdom began last year, but most of the six issue series came out in 2007, and it's the fourth best Marvel comic of the year. I won't tell you what the other three are yet, because they're all on my Top 20 list, but this comic is in really good company. I'd never even heard of the Pete Wisom character (or writer Paul Cornell) before this series, since I'd dropped Excalibur the first time Alan Davis left, and I've never seen a complete episode of any incarnation of Dr. Who. Apparently Pete Wisdom was some kind of early Warren Ellis creation, and apparently Paul Cornell wrote some good Dr. Who stuff (episodes and novels and the like), but I didn't know any of that when I read the first issue. And it was my favorite first issue in recent history. Unfortunately, the quality wasn't as consistent all the way through the series, but it was still a pretty great six issues, and I believe Paul Cornell will begin writing the new Excalibur title next year, which means I'll have another Marvel monthly to look forward to.

What did I like? The first issue threw so many ideas at me, and Pete Wisdom, as cool as he is, was probably the least interesting. Cornell gave us the journeyman Captain Midlands, who was kind of like what Captain Britain would be like if he were mediocre at everything and kind of pissed off about it. He also gave us a Skrull who acted like John Lennon and some kind of badass pixie called Tink. The whole first issue not only had plenty of characters to introduce and plot to set up, but it also had action and humor. Every issue, in fact, seemed quite compressed compared to any mainstream comic over the past few years. Some readers complained about the lack of exposition, or the disorienting feel as each issue jumped ahead to a new adventure, but I reveled in a Marvel comic that actually moved forward. I don't want to give the impression that Wisdom was good just because it was better than the usual crap on the shelves. No, it was just so much better, without any fanfare, that it surprised me. And the first couple of issues were drawn by one of the most underrated superhero artists working today: Trevor Hairsine. If you've ever seen his Captain America arc from before the Ed Brubaker relaunch, you know how good he is. He also did the Ultimate Six miniseries, and the Ultimate Universe has never looked so good. I know it's blasphemy to say this, but I think he might be better than Bryan Hitch (who his style resembles), simply because he doesn't put the "camera" so close to the action. He gives us a deeper sense of how characters occupy space in relation to one another, which I appreciate.

Why didn't it make the Top 20? Unfortunately, Hairsine left after the first two or three issues and Manuel Garcia came in to finish the series as artist. Garcia is a fine penciler, and if he had done all six issues, I probably would have ranked the series higher, actually. I know that sounds paradoxical after raving about Hairsine above, but I value a consistent art team more than a flash of inconsistent brilliance. The inconsistent art hurts the overall story, and that bothers me. Also, Cornell started off with such a bang--some kind of war with the world of faerie--that the other issues seemed a bit less spectacular in comparison. Even when he brought in an army of Jack the Rippers, he couldn't top the opening issue.

Wisdom didn't get much attention from anyone this year, but it's been collected as "X-Men: Wisom--Rudiments of Wisdom" in trade paperback. I don't know if adding the X-Men tag (and it's not an X-Men book AT ALL) helped sales, but I suspect it didn't help too much, since it's currently ranked at #450,000 on Amazon, and even MY book is beating it, sales-wise, at #430,000. But Wisdom, whatever it's now called, is good--really good, and worth a close look.
Posted by Timothy Callahan at 1:14 AM

Agreed on Wisdom being one of the best Marvel books of the year. I'm itching for an ongoing asap.