Just Outside the 20: Powr Masters

I don't know exactly what will make my Top 10 Comics of 2007, but I have my Top 20 hammered out, and I know the books that fell a bit short. These were things I liked a lot this year, but not quite enough to give them a spot in the elite 20. Over the next week or so, I'll be discussing these books that fell short, explaining why I liked them and why they didn't quite make the list. 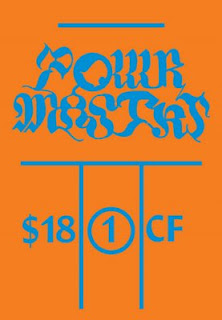 Don't be fooled by the seemingly simple linework and child-like compositions. Powr Masters is an adventure story which dips into the waters of surrealism and absurdism to create something that I've never quite seen before. And that's a good thing.

What did I like? The lack of exposition. Nothing is explained, and the disorientation contributes to the dream-like quality of the narrative. Characters appear without introduction, disappear, and then return later. The plot moves forward, but toward what? We don't know. Everything is a surprise as we try to decode the signs and signals from a world with which we are unfamiliar. CF uses the tropes and archetypes of Dungeons and Dragons-style fantasy adventures as his starting point, but this book has such humor and grace, and such mystery, that it avoids any of the cliches you'd find in any other Gygax-inspired tale.

One of my favorite aspects of Powr Masters is the straight-faced dialogue filled with non-sequiturs and absurdities, along with the seemingly unstoppable flow of ideas. Just when you think the story is settling into a pattern--some logical structure--something new pops up, whether it's an unseen prisoner shouting for help without much luck or a small army of robots emerging from the fertilized soil. It's the first of several(?) projected volumes, I believe, and I will certainly continue picking them up to engage in this delirious tale of who knows what.

Why didn't it make the Top 20? It's close, first of all. It would be in my Top 25. But it doesn't quite make the cut. The main reason is that it's the type of comic I could only recommend to a small subset of readers. Not everyone will "get" Powr Masters on any level. The art looks like the worst kind of amateurish on first glance, and the story doesn't "make sense." Most readers won't be able to get past that. I go back and forth on this stance, but this week I tend to think that Best Of lists should err toward widespread appeal and away from the esoteric. I might change my mind about this on other days, and scream, "No! Best Of lists should champion the new, the innovative, the bold, even when it will be despised by all but a tiny minority." And perhaps when other Powr Masters volumes premiere, I'll do exactly that, but I just don't think its quality outweighs its apparent ugliness. It's the comic book equivalent of a Guy Maddin film, and it's really not for everyone.

Edited to Add: You know, I reread Powr Masters last night, and I love it so much it might make the Top 20, hell--the Top 10--no matter what. It's really good, and I can't stop thinking about it.
Posted by Timothy Callahan at 5:28 PM