Just Outside the 20: The Salon

Yesterday, it was Powr Masters which didn't quite make the Top 20 of the 2007. Then, I changed my mind about it. But, today, I'm taking a look at a book I liked that DEFINITELY will not make my Best of 2007 list, but it's still a pretty good graphic novel. By the way, in retrospect, 2007 has been a phenomenal year for comics, once you get past all the Countdown/Amazons Attack/Event Fatigue stuff that continues to wear all of us down.

The Salon, by Nick Bertozzi 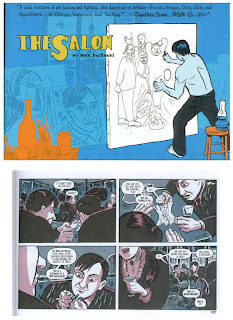 When a book like this doesn't make my Top 20, you know it's been a great year. Nick Bertozzi's graphic novel is gorgeous--his characters are distinctive, his color palette vibrantly discordant, and his brush work is bold. The setting is fascinating, as well: Early-20th century Paris, as Modernism was beginning to blossom.

What did I like? The art and setting, as I mentioned above, definitely. I also fully enjoyed the Picasso and Braque interactions and the moment when they "discovered" cubism by looking at a crumpled up sketch. Bertozzi seems to be at his best, at least in The Salon, when he's linking the history of comics with Modernism with artistic inspiration, all neatly described in a narrative. He gives us a dynamic lesson about how artists influence one another, and the social roles each artist fulfills. Bertozzi is a major talent, without a doubt.

Why didn't it make the Top 20? Bertozzi relies too heavily on magical absinthe. The supernatural conceit of the graphic novel is that the characters can imbibe a blue absinthe which allows them to physically enter any painting they desire. The conceit is not only ridiculous (would these characters really want to enter into a painting? Haven't they seen What Dreams May Come? Robin Williams is waiting to pounce!) but it is completely unnecessary to the graphic novel. It feels like Bertozzi's attempt at "jazzing it up." He didn't seem to think anyone would want to read about the early Moderns making art, discussing art, embracing art. So he had to come up with something magical to compete with the attacking Amazons on the comic shelves. The conceit runs throughout the work, and it even builds to a "suspense-laden" climax. Unfortunately, the magical absinthe sequences are the least interesting parts of the book, and its emphasis, especially near the end, pushes all the really important stuff (like the advent of Cubism and the way this group of painters changed the way we see art) to the side.

The Salon is an important work by an important artist. But its flaws keep it from being one of the Best Comics of 2007.
Posted by Timothy Callahan at 8:24 AM