Just Outside the 20: Nick Fury, Agent of SHIELD Masterworks

I've already blogged about the quality of Powr Masters, The Salon, and Wisdom, all of which made their mark in the great comics year of 2007, but this has also been a good year for collected editions of classic material, and one of the best of the bunch is "Nick Fury, Agent of SHIELD Masterworks, Volume 1." It didn't quite make my end-of-the-year Top 20 list, but I loved the heck out of it. 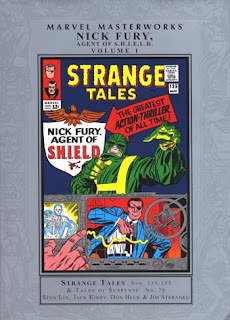 After Stan Lee and Jack Kirby brought their WWII-era Sgt. Fury character into the present as a government operative during an early issue of Fantastic Four (the one featuring the shocking reveal of the Hate Monger as, gasp, Hitler! Remember when people thought Civil War was going to turn out with a reveal like that? Good times!), a latter-day Nick Fury series was inevitable. The resulting comics, which took the gruff, cigar chomping military hero and mixed him into a "Man from U.N.C.L.E."-inspired world, are far superior to anything Lee and Kirby produced on the Sgt. Fury and his Howling Commandos series, even though Kirby only did layouts on the SHIELD stories. The problem with the Howling Commandos comics is that each issue tried to be more bombastic than the last (and apparently Lee's intention with Sgt. Fury was to show that the "Marvel style"--that is, totally over-the-top action and drama escalating from page to page, combined with pathos--could work in ANY genre). Because Sgt. Fury is a bombastic character in a bombastic setting (World War II, vs. Nazis!), everything feels even-keeled and therefore flat. By juxtaposing the Howling Commander himself, Nick Fury, with the sleek (and more "quiet") spy genre, the series increased the dramatic tension. Plus it had lots more cool gadgets.

What did I like? I like being able to watch Stan Lee and Jack Kirby make up this corner of the Marvel Universe as they go along. The same could be said about any Silver Age Marvel Masterworks title, I suppose, but these Nick Fury stories are only 12 pages long, and they feel even more improvised from issue-to-issue than most other comics of the time. Perhaps it was because the Marvel line was expanding by the time Nick Fury became an Agent of SHIELD, and Stan and Jack were at their frantic height, but whatever it was, it worked. At first, they seemed to play the series as a straight spy narrative, forgetting who Nick Fury used to be (or maybe assuming he'd softened up in his old age--not that he looked a day older than he had in World War II, even though the SHIELD stuff began twenty years later). Soon, though, Fury started acting like his name--raging against the buttoned-down conformity of his administrators, chomping on cigars, nearly getting fired as often as he saved the day. And the birth of Hydra happens in these pages, along with AIM and brilliant third-tier criminal geniuses like Mentallo and the Fixer. All of these sinister threats are tied together by a larger-looming threat, obliquely referred to as "THEM," although I'm pretty sure THEM ends up just being the Hydra organization after all. See, they were clearly making it all up as they went along, and it is an absolute blast to read.

Why didn't it make the Top 20? "Making it all up as they went along" is great, but it also leaves some strange moments littered throughout the book. Old Howling Commandos Dum Dum Dugan and Gabe Jones show up as SHIELD agents without any explanation, and without much specific reference to their past relationship (and without any rationale to explain why neither they nor Fury have aged a day in the previous 20 years). The evil machinations are revealed to be the work of the villainous Hydra organization, then AIM (a division of Hydra) joins the fray, then another incarnation of Hydra, and even Mentallo and the Fixer supposedly operate on behalf of Hydra. In other words, too much Hydra in this book. A bit more variety would be nice, and a little less slavish imitation of the Man from UNCLE. Plus, as sharp as the artwork is with Kirby on layouts and guys like John Severin, John Buscema, and Jim Steranko on finishes, I know the book gets EVEN BETTER when Steranko takes over and turns the whole comic into a mod trip through super-spyland.

Nick Fury, Agent of SHIELD Masterworks, Volume 1 is a great addition to the Masterworks line, and I can't wait for the next Volume. Read it for yourself and you'll see why Nick Fury was such a cool fixture in the Marvel Universe.
Posted by Timothy Callahan at 6:05 PM

I'm just hoping that Bendis' returning Nick Fury to the 616 is one of, if not THE best comic event of the year. He's been gone for far too long - even though his influence is being felt and there are dispatches from wherever he's been. And with Ultimate Nick Fury's future in doubt (Ultimate Power just ended - it was better than I hoped it would be.), I need that eyepatch-wearing bastard back before I go eBay the Hasselhoff film.

Also, do you remember "Nick Fury vs. S.H.I.E.L.D. from 17 or so years ago? My copy's in storage, but I remember it being very good.