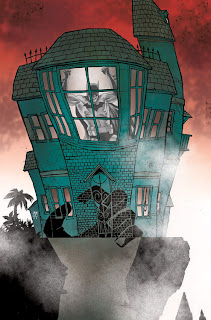 Batman #668, by Grant Morrison and J.H. Williams III, is an excellent comic book. As the second installment of the three-part "Club of Heroes" story, it expands the story both inwardly and outwardly, creating a metafictional context for the Agatha Christie-inspired mystery while advancing the murderous plot.

The issue begins with a three-part sequence, labelled "Eight Years Ago," drawn in a generic 1970s superhero style. The conspicuous use of benday dots in the color scheme (along with the radical shift from Williams III's "normal style") indicates that this sequence takes place not only in the past, but it takes place in the "comic book past"--a time when stories, and the characters inhabiting those stories, were more simplistic. The Legionary's dialogue, "Ah, c'mon fellas, we're here to promote world peace and trade crimefighting methods" undescores the naive sweetness of the past. Since we have already seen the Legionary brutally mudered in the "present day" story of issue #667, this three-page flashback provides a brilliant contrast to the way things were (in regard to the past of these characters, and in regard to the past of Batman himself, who was just as corny in his 1950s comic book appearances) and the way things are today (with each character having gone through an off-panel revamp or two, as I described in my look at the previous issue, and Batman having remained a much darker incarnation of himself ever since the mid 1980s). Throughout the issue, Morrison and Williams III play with the resonance of the past on the events of the present.

Actually, Morrison seems to be playing with that theme throughout his Batman run. As much as his iteration of Batman is self-declared attempt to return the character to the Neal Adams "hairy-chested love God" version, and as much as Morrison explores the nature of Batman doppelgangers and variations, the dominant idea throughout all of Morrison's issues so far seems to be the legacy of the past. Batman had to deal with the consequences of his tryst with Talia, he's re-opened the "Black Casebook" which is his attempt to reconcile the supernatural and science-fictional elements of his history, and now, Batman's reunion with minor (some would say ridiculous) characters from his past has resulted in tragedy. Even the much-maligned prose issue featuring "The Clown at Midnight," fits into that scheme, since Morrison's Joker is terrifying exactly because he constantly reinvents himself with no regard for the past. He's a character without the weight of a consistent legacy, and that's where his evil derives.

Batman #668 fits firmly into that thematic structure, but that's not necessarily what makes it good. What makes it good is Morrison's use of Batman as as detective, the expansiveness of the implied mythology of these minor characters, and the stunning work by J.H. Williams III.

First, the detective bits. As I've mentioned elsewhere, Batman rarely uses his supposed detective skills. Even in Paul Dini's earlier Detective Comics stories, which are pretty good self-contained stories, the Riddler plays the role of the detective, and then Batman kind of explains what was really going on in the end. We don't see Batman doing much detecting throughout the course of the stories. And most writers ignore the detective stuff entirely, moving from one fight or pursuit to another, without much care in the small details of observation. Since those pieces are often ignored, it's nice to see Morrison taking advantage of that side of Batman. It's not like the issue is revolutionary in the way it shows these detective moments, but it's nice to see. Morrison gives us clues, like the number of times the Legionary was killed, and a card with a bit of Latin. He gives us chicken grease and a mysterious light source. These are conventions of the detective genre, nothing we haven't seen on television before, but they're conventions because they are an intrinsic part of that type of mystery story. And that's what Batman #668 is--beneath all the "legacy of the past" stuff and the metafictional representations of the "Batmen," drawn in the styles of various other arists--it's a mystery story. A good one. I don't know whodunit, but I'm curious to find out.

Second, Morrison and Williams III use the iconography of comic books (both verbal and visual) to create an entire mythology around the Club of Heroes--characters who made less than a handful of appearances in previous stories and were created to represent what their original name impled. They were the "Batmen of All Nations," and their characterization was a stereotypical as their costumes. The French Batman looked like Musketeer (hence his name), the Native American Batman wore feathers, the British Batman was a knight, etc. While Williams III draws each character in a way which implies that each of them has undergone revisionism (which I won't go into here, since I covered it in my review of #667), and thereby uses a visual shorthand to imply a depth of characterization (even a stereotypical one) missing from the Club's previous appearances, Morrison uses apparently throw-away lines of dialogue to refer to a world outside the story. The Musketeer refers to "those years in prison" and his "old adversary Pierrot Lunaire," the Legionary lost his city to "a madman called Charlie Caligula," and the Gaucho explains that "the blue scorpion is the calling card of the assassin Scorpiana." Yes, those are ridiculous character names that match the stereotypical portrayal of these "Batmen," but they imply the Morrison has created histories for these sad, doomed heroes. Scorpiana, Charlie Caligula, and Pierrot Lunaire will doubtful play any kind of role in the story (I doubt they are clues, although I don't know for sure), but just by mentioning them in the story, the issue feels larger, more expansive, and more imaginative. It's basically a locked-room mystery that takes place in the world between the imagined past, the "real" past of Batman, and the recontextualized present.

Third, Williams III is in top form in this story. The conceit of illustrating each character in the mode of another artist (or style) could be a disaster, and I can see how a reader might find it off-putting even in this issue, but I think Williams III pulls it off brilliantly. One could argue, perhaps, that it's a bit like watching Who Framed Roger Rabbit, with all the competing layers and character designs clashing against one another. But that's where its beauty lies. It's a self-aware approach to comic book art, surely, but the clash of styles acts not only as a visual shorthand (as I mentioned above), but it matches the lack of harmony within the Club of Heroes as well. They clash, both artistically and personally. It fits. But Williams III doesn't stop there, with his artistic playfulness. He uses a batwing design to frame a sequence, interrupted by the sillouette of a black gloved hand (representing the machinations of the mysterious villain). And in a virtuoso two-page spread in the climax of issue, he justaposes three layers: a six-panel top layer, with the final three panels falling off into the following page as the climactic image is revealed beneath; a glove-shaped panel as the middle layer, revealing the death of another victim; and two partly-obscured nine-panel grids as the bottom layer, revealing the romaticized, sweetly naive past of the victim. It connects the legacy of the past theme with the thriller plot and emphasizes the level of the threat while showing character reactions. All done with style and beauty. It's a remarkable two pages.

Morrison's Batman run has been interesting since the beginning, but his collaboration with Williams III has moved this three-issue arc into the top tier of Morrison superhero stories. Batman #668 is not only the best comic of the week, but I think the "Club of Heroes" will be remembered as one of the Batman highlights of the decade.
Posted by Timothy Callahan at 9:12 PM

Excellent stuff, Timothy. Good to have you back. I've got a few new posts over at my blog.