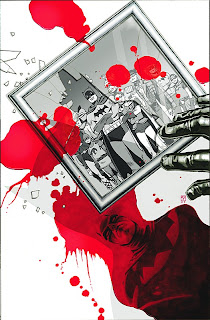 Eight months ago, in a Wizard Universe Article/Interview, we read the following words:

"From the Batman of the future, Morrison will segue into the Batmen of the past, a.k.a. the Batmen of All Nations, a.k.a. the Club of Heroes, an international team of Batman-inspired heroes who debuted in Detective Comics back in the 1950s.

“'To me, it’s just what would have happened if these guys had been around and the stories of them had been getting told all through the ’80s, so they’ve been through deconstruction and reconstruction,' the writer says. 'It was kind of neat looking at what could go wrong with Batman. The Italian guy who was a mature type film hero has become this big, fat guy who loves eating and trades on his past glories as The Legionary. The Knight and The Squire are still active but it’s a grownup Squire and The Knight has his own Squire. The Gaucho has become a serious Argentinean superhero who is well respected—he’s the real deal. Wingman, who Batman trained in the past is now really pissed off, and doesn’t want to admit that Batman ever trained him because he wants to make his own way.'

“'It’s kind of like guys we all know and they’re all in a room and bad sh-- happens and they start getting knocked off one by one.'”

And, in Batman #667, that's exactly what we get. It's the same plot structure as Agatha Christie's classic And Then There Were None (also published as Ten Little Indians, and originally titled, if you can believe it, Ten Little Niggers), in which a group of assorted characters arrives on a mysterious island to find themselves getting killed off one by one.

What's great about the issue (and it is a GREAT issue, by far the best Morrison Batman issue yet--and I've liked his run so far, as detailed in many other blog posts) is that Morrison doesn't just resurrect these classic 1950s supporting characters, but he treats them as if they have gone through the "deconstruction and reconstruction" of the 1980s. So, when we see them, they are revisionist versions of the old characters, drawn by the masterful J. H. Williams III in the style of the imagined revision. The most obvious example is the Gaucho, who is clearly illustrated in the style of Howard Chaykin. By showing the Gaucho through a Chaykin pastiche, Morrison (through Williams III) is able to provide a subtext for the character immediately. Knowing what we know about Chaykin's work, we know that this incarnation of the Gaucho is probably a cynical anti-hero who rebels against the system and loves the sexy ladies. It's a fun, postmodern conceit used by Morrison, that positions each member of the "Club of Heroes" as a different type of stereotypical 1980s revamp.

None of this matters to the plot, necessarily, but it doesn't detract from it either, as Williams III is able to meld the different styles of artwork together beautifully, just as he did on his gorgeous Promethea run.

Besides the Gaucho, in his Chaykinesque splendor, and the Knight and Squire who have been revamped with a clean but bulky Ed McGuinness style (as seen in Morrison's JLA Classified story), other characters from the Club seem to reflect the following artistic styles:

American Indians, Man-of-Bats (drawn in a Steve Rude style), and his sidekick Raven Red (formerly Little Raven--and drawn in a style I can't quite figure out, but it's not the Steve Rude style of his partner--it looks a bit like early Alan Davis, circa Marvelman)

The Italian Legionary, once a noble-looking centurion, now a bloated mockery drawn (possibly) in a Dave Gibbons' style (?)

Wingman, from Europe, is reimagined as a Azrael-era Joe Quesada character, complete with the armored helmet and red visor.

The Musketeer, from France of course, is drawn in a style different from the others, but I don't recognize it, although his head resembled David Lloyd's V for Vendetta design (but the figure looks nothing like Lloyd's work--I don't know who Williams III modelled this imagined revamp upon).

It's fun to play the guessing game, and to try to place the different inspirations for the style used on each character, but that's only one layer of Batman #667. There's a lot of other stuff going on, most prominently the threat of the "Black Glove" who seems to be gambling with the life of these characters.

Morrison's run on Batman may seem a bit disjointed--Ninja Manbats! Damian! Joker revised! Evil Batmen! Future Batman! and now This!--but I'm guessing that it will all link together thematically (if not narratively), and even if it doesn't, you can enjoy the "Club of Heroes" story on its own terms. It's good comics. Read it several times. Once for the mystery plot. Once for the artist guessing game. And once because it's such a cool-looking comic. And maybe one more time for fun.

By the way, Chris Roberson talks a bit about the history of The Batmen of All Nations in a January blog post, if you're interested. And why wouldn't you be?

EDITED TO ADD: When I asked J. H. Williams III on the Barbelith message board if Morrison had suggested certain artistic styles for the Club of Heroes characters, Williams had this to say: "nah, grant had no requests. he didn't know what i was doing until he saw it and he has told me he is very pleased with where i come from with things. and thanks for understanding what i'm trying to do. i really feel that having a 'personal style' can be very limiting and can cause one to not grow and learn new things. as far as i'm concerned there is always something new to be learned. that there should no 'style' per se. its an almost arrogant form of thinking in regards to saying one has their own definitive style that surpasses anything one might see around them. like their style matters more than others. like that is it and nothing else works. i think this is one of the reasons why we see so many artists stagnate. because they stick themselves into a box and they don't want to or can't get out of it after a while. they start to lose something because they aren't looking to new horizons and discovering new techniques or ideas anymore. i see it all the time sadly. many are supremely great at what they do but thats ALL they do. sort of been there done that. i never want that to happen to me and so i'm conatantly pushing myself in new ways to see what comes out. the crossing midnight covers are good example of this. and with this batman stuff, none of the style choices were very well thought out or orchestrated. it was more based on an instinctual gut reaction as i sketched them all out for the first time. this is just what came out and i stuck to it because i really liked the effect."

He is a man with amazing instincts, then. Truly superior work.
Posted by Timothy Callahan at 2:00 AM

Yeah, I really liked this issue, and I cared not a whit about figuring out which artist Williams was aping. Morrison often gets too clever for his own good, but here he nails it.

According to J.H. Williams III, the different characters in different styles thing was actually his idea. It also happens to work in nicely with the conceit behind the "updated" Club of Heroes characters having 30 plus years of imagined stories supplementing them. I thought this issue was pretty awesome and that is still the best damn drawing of the Batplane I have ever seen.

Yeah, I specifically asked J.H. over on the Barbelith board if he was directed to use any stylistic pastiches, and he said he just did it on his own, which just shows how much of a genius he is. He might be my favorite artist right now. I've been reading "Justice Riders" and "Son of Superman" just for his artwork, in the past few weeks.

Now, to my eye, the Musketeer looked to be in a Steve Rude style, and Dark Ranger looked more Kevin Nowlan than Chris Sprouse. But I don't see a great deal of significance to any of these choices. What you are reading into the Chaykin-influenced art on the Gaucho stems from Chaykin's work as a writer rather than as an artist, and most of these artists don't write much, if at all.

Looking at the figures, I came to different conclusions about the influences.

Knight & Squire = McGuiness (that's a given too)

Beyond that, my best guesses:

Well, the idea that designs are based on Alan Moore's V for Vendetta, Alan Moore's Tom Strong, Alan Moore's Watchmen, Midnighter, etc. really makes you think about Morrison's strategy of updating the characters as though they've gone through grim-n-gritty revamps/deconstructions. It's window dressing, but it's the good kind.

Think of Astro City (and I am going to rip off a bunch of stuff from Marc Singer here) and the premise that one of its strengths is your knowledge of the analog DC and Marvel characters to imply the history of The Confessor or Samaritan or whoever. It's another form of supercompression.

I don't know that it's another form of supercompression. It's just a sound narrative technique.

Like Shakespeare using the apparent structure of a revenge tragedy and then subverting it with Hamlet.

Or Melville naming characters in Moby Dick after Biblical characters.

Steve and Robert R.--Nice guesses, but everything you changed from my guesses turned out to be wrong (not that I was right on everything either). See J.H. Williams III's own comments on the issue.

Well, I'm counting myself right on "generic 70s superhero" = Gil Kane for Red Raven. Look at Red Raven behind The Gaucho when they survey the explosion, that's definitely influenced by Kane.

Yeah, I see the Steve Rude influence now in Man-of-Bats, I made the mistake of assuming he was using the same style for both Man-of-Bats and Red Raven. And some Alan Davis in The Musketeer, although I think that Breyfogle was in the right ballpark for "generic 80s superhero" look. I'll add that Sprouse obviously has some Toth influence in his work.

It's going to be fun seeing what else J. H. Williams has up his sleeve for this story. This is one of the few books out this week that rewards taking a closer look.

It's really such a great comic, isn't it? I love it.