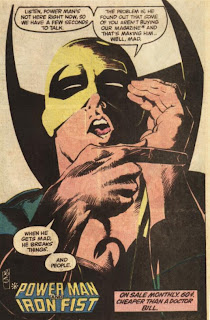 The actual title of the comic book, as indicated on page one, is The Immortal Iron Fist: Orson Randall and the Green Mist of Death. I like to think that the colon's not there. The character should be thought of as The Immortal Iron Fist Orson Randall (all one word), even though I get that he's not technically immortal, while the Iron Fist power is. Or something. Eastern mysticism loses me at times.

By the way, now that I've finished all three volumes of The Essential Defenders, which I'll write about at some point (and yes, the issues did get a lot better once Steve Gerber took over, and I'm glad I didn't give up after the terrible first volume in the series), I'm going to dip back into some classic Power Man and Iron Fist action--I own most of the issues, and I've got the Essential book to fill in most of the ones I'm missing. Reading all of these Bronze Age Marvel comics makes me think my next book should be Urban Anxiety: How Marvel Comics Taught Us to Love New York. If anyone wants to pay me to write that book, let me know. I could fit it into my schedule. For the right price. (I'm just like Luke Cage, bitch. I don't work for free.)

You know what I like besides Bronze Age Marvel comics though? Matt Fraction. And the Nick Dragotta/Mike Allred art team. And Russ Heath drawing machine-gun bikini cowgirls, and obscure Golden Age characters, and Frankenstein. And Orson Randall, baddest of the bad--the Iron Fist with the gun-fu. 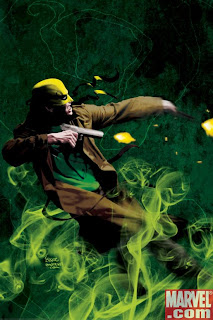 So, it's like this comic (The Immortal Iron Fist: Orson Randall and the Green Mist of Death, which I will now abbreviate as Green Mist) was written by the tiny people who live inside my brain and feast off the thoughts I have when I should be doing something productive with my life. Those tiny bastards are smart, though, and they know how to take all the stuff I love (and forgot I loved) and mix it all up in a new, surprising way. It's kind of impossible for me to review this comic, since I'm so rabidly predisposed to like it, but I wanted to point out that it exists, just in case you are one of the tiny people who don't live inside my brain and/or you don't own this comic book yet.

I'm sure you read the monthly Immortal Iron Fist comic, since it was on my Top 10 list (and everyone else's--at least those who matter), and you have discerning comic book taste. But if your mind isn't the same as it used to be, you might have forgotten that Orson Randall is the pulp-era, gun-toting Iron Fist who may or may not be the grandfather of current Iron Fist Danny Rand. This Green Mist one-shot doesn't just retell a story from Orson Randall's past, which might have been expected. You might have thought, for example, when hearing about an Orson Randall-centric special, that we'd get some story about how he fought some weird guy back in the early 20th century and how the story somehow encapsulated the essence of the character, and therefore shed some light on his current relationship with Danny Rand. Okay, you'd be right if you thought that, but it doesn't just tell one story--it tells a WHOLE BUNCH of linked stories AND it's awesome AND it ties directly into what is happening in the current story arc in the regular monthly title.

So, in other words, you have to read it or it will be like that dream you had about showing up to middle school wearing just your underwear and everyone laughed at you because you were wearing fruit of the looms and didn't you know that everyone else wore BVDs and therefore you sucked. Except instead of a dream, it will be real.

That's what not reading Green Mist will be like, I'm sure of it.

Green Mist does have a flaw, that I feel compelled to point out just to prove that I'm not a mindlessly obsessed Orson Randall and Iron Fist fanatic. I appreciate the skill and beauty of all the artists who worked on the book (and it's quite a line-up, with not only Dragotta, Allred, and Heath, but also guys like LaRosa, Gaudiano, and Breitwiser, who are far more talented than you think), and I usually like the conceit of "hey, here's a different artist for each era. To give it, you know, a different vibe," but here the transition between artists (ESPECIALLY the transition between Heath and Larosa) doesn't work well. Fraction tries to provide word balloon-to-caption transition between the sequences, to provide a thematic link as we jump forward in time, but the shift in location and artist is too disorienting to be effective, especially when we see Orson Randall tending to a wounded compatriot and then shift forward in time (although it's not immediately clear how far forward) to see Randall carrying a completely different wounded compatriot, except we can't really tell it's a different wounded character, because the art is unclear and inconsistent from one artist to the next. I think the transitions could have been handled better, and because they didn't quite work, the story loses some of its thematic resonance (and narrative momentum).

I understand the irony as Orson says (via caption), "I just can't stand by and watch as everyone I love dies in my arms" to one character and we see Randall carrying yet another character in the juxtaposed panel. BUT, when I read it at first, I thought it was just the same character he was talking to in the panel before. That's my misreading, obviously, but it was based on the lack of distinction between injured character #1 and injured character #2 and the artistic differences in the way each character was depicted by different artists. Basically, I found myself saying, "wait--what?" a couple times as I read the story, and then I had to flip back and say, "oh, it was supposed to be THAT guy." So, yeah, I had to reread the comic. Big deal. Why am I whining about that? The comic is challenging, folks. I'll have to learn to suck it up. (But, seriously, the art is a bit problematic, so don't worry if you have to give it a second read through to see what's happening to whom--and if you do get all the pieces of the puzzle the first time through: nicely done.)

It's easier for me to complain about that tiny bit of non-greatness than it is to talk about all the things I did like about Green Mist. I listed some of the things I liked earlier, and the comic is surely full of pulp goodness, but my favorite sequence (and the cowgirls are, admittedly, pretty hard to top, and I can imagine Matt Fraction actively thinking about how he's going to top the Russ Heath-drawn ladies) is the Frankenstein's monster/Son of Frankenstein sequence in which Orson Randall stands tall against the fur-clad monster (who I remember vividly from my Official Handbook of the Marvel Universe, because I always thought about how out-of-place the gawky, unkempt, unfashionable Frankenstein's monster looked amidst the glossy super-heroes). Randall, with a single line of dialogue, turns the monster from a shadowy, menacing threat into a giggling child. All of this happens before he find himself betrayed by the evil, prepubescent Son of Frankenstein (complete with goggles and buzzsaw). 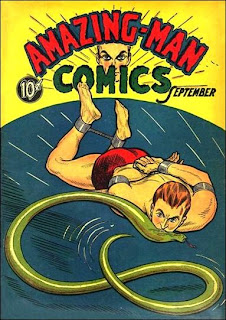 And, of course, Fraction reveals more about the other title character, the Green Mist, who is also known as the Prince of Orphans, and also known as that obscure character Bill Everett created who kind of dresses like He-Man, except he's quite slender.

I liked The Immortal Iron Fist: Orson Randall and the Green Mist of Death more than anything else I read this week (and I read pretty much everything on the shelf). Hell, it's the Comic of the Month--with only Jason Aaron's debut on Ghost Rider close to contention. But you know that Green Mist is good, because you've already purchased it, right?
Posted by Timothy Callahan at 12:15 AM

Goddamn shop didn't have any goddamn copies. So, this will have to wait until I'm in London in a couple of weeks and can visit a good shop. Goddamn Windsor.

I know I have it in my collection - but from where?

I found it on the magical internet.

I assume it's from sometime in the early 1980s, though. I remember seeing it.

That Iron Fist ad is most definitely from the early 80's and most likely from 1983. You can find it in Daredevil or the New Mutants or some second tier series along those lines. Bill Sienkiewicz also drew a companion piece featuring a close up of Power Man.