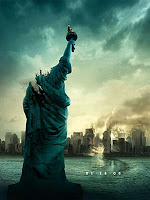 Shockingly, my wife and I were able to sneak out of the house last night and actually attend a movie in a real-live theater (or, as the locals call it, a "multi-plex.") Did we see There Will Be Blood by my all-time favorite director Paul Thomas Anderson? No. Did we see Juno, featuring the great Michael Cera and the possibly even greater Ellen Page (have you SEEN Hard Candy? Her performance is amazing)? No.

We saw Cloverfield, as you have probably figured out by the title of this post.

And, since you are an astute reader, you can probably also figure out that I liked it.

I did like it. I liked it quite a bit. And before I discuss it further, let me say that Cloverfield's in very good company. As soon as the credits started to roll, the woman behind us (and there were only about six people in the whole theater) said, loudly, "that was the WORST movie I've ever seen!" I've heard that exact expression said in that tone only twice before. Once, at the end of Pulp Fiction during its opening weekend. And once, after opening night of Anchorman. (The guy who said it about Anchorman also added, "it wasn't funny AT ALL.")

So, the fact that Cloverfield is in the same strange company as Pulp Fiction and Anchorman should tell you that its doing something right.

Cloverfield is what the War of the Worlds remake wanted to be, but Spielberg didn't have the balls to pull it off. Spielberg went with sentimentality (the entire family is reunited at the end? Really? You're going to go with that, after everything you've set up in the rest of the movie?) and with faux heroism (all of a sudden, Tom Cruise the "regular guy" who has a transmission on his kitchen table becomes an action hero and helps figure out how the aliens can be defeated? Really?), while Cloverfield director Matt Reeves went with nihilism (you think the journey into mid-town was about love? It was about selfishness and misguided attempts at doing what's right. You want everyone to live happily ever after? Screw you!) And that second approach makes for a much better monster movie.

While Spielberg is incapable of making a monster movie without a few moments where the jaunty music of John Williams reassures the audience that everything will be all right (see Jaws and Jurassic Park for extra-jauntiness), Matt Reeves abandons a musical score completely (and appropriately), leaving the screeching and the screaming and the anxious panting to amplify the emotion which, throughout the vast majority of the running time, is intense.

Are there problems with the movie? Probably. Especially if you're looking to apply some kind of rational logic to the movements of the monster (the creature always seems to be right in front of where the protagonists want to go, except when the creature is RIGHT BEHIND THEM--gasp!), but really, it's a monster movie and as such, it has one job, and that is to thrill and exhilarate and make you feel the threat of the creature. Cloverfield does that as well as any movie ever made, and I liked it.

So, take that old lady sitting behind us. Go rent Daddy Day Camp or something. Obviously, Cloverfield is too much for you to handle.
Posted by Timothy Callahan at 10:27 PM

That's right, I'm a month and a half behind the times on this post. I'm like the island on LOST, but without the deeply buried secrets (as far as you know).

I saw Cloverfield a few weeks back (which is remarkably current for me) and I really liked it. I had several thoughts:

1. I didn't realize the lack of music until the overprocessed Hollywood score came in at the credits like it couldn't hide any longer. We've been conditioned to think that things like editing and score aid the movie. This was a nice counterpoint to that.

2. This movie will actually work BETTER on video.

3. I haven't had the shit scared out of me like that for awhile now.

Also, the wife and I saw No Country for Old Men this week and I haven't seen a film this powerful since Munich. There are so many points to debate and discuss, but the one burning one is this: did Chigurh kill Ross' wife? I know he checked his boots as he walked out, but several things also crop up:

1. We didn't see the kill as we did all his others.

2. We're told that he has "principles beyond money and drugs" and her speech seemed to resonate with him...

3....so much so that it can be argued that his rumination on that is what got him into the accident (blindsided him as it were)

Still, though, a spectacular film: the DVD is out on 3/11 and you can be sure I'll get that. I need a few more views but it will go Top 5 for the boys, I'm sure.

You also mentioned (in your post on NCfOM) the Coen trope of Unstoppable Evil - how about the Powerful Man behind a Big Desk?

Finally, I saw "Jumper". My advice - don't. It started out very promising and the last 10 minutes had some really good stuff, but there were so many problems with it.

Cloverfield:
1) I didn't realize the lack of music either, until I was driving in the car with my wife yesterday, talking about Cloverfield and explaining why it was so much better than War of the Worlds, and then I said, "wait--Cloverfield had no orchestral score!" It wasn't something I was consciously aware of as I watched it, which is cool.

2) I don't know. I think it will lose the immersive quality on video. Maybe I'm wrong.

3) Did the New York setting make it more frightening for you, do you think?

No Country:
1) I think he did kill her. Wasn't there a sound effect to imply that he did? I can't remember.

3) I think the accident is an element of randomness--like his coin flip.

I have no intention of seeing Jumper after reading the reviews online. But thanks for the warning. I like Doug Liman enough that I might have thought about maybe seeing it on video. Probably not, though.

Yeah, Doug Liman. "Swingers", "Go", "The Bourne Identity", "Mr. and Mrs. Smith". You'd expect this to be good, also given that the premise is interesting as well.

The action is TOO frenetic. Now, with "Bourne" and "Smith", that was the case, too. But we KNOW what that stuff is supposed to look like, so we can go with the flow. Here, it's just confusing.

We're not given an explanation of the Jumper's ability - the parameters, restrictions and possibilities are left out of any dialogue or mise en scene.

Just miserable the more I think about it. The Indiana Jones trailer was AMAZING though.

Cloverfield: Knowing and having been in those locations does tie me into the film a lot more, yes.

No Country: I don't remember a sound effect - that would have answered my own question.

So, which are you rooting for on Sunday, No Country or There Will Be Blood? Again, the Coen's have made a film that has been with the film public for a large part of the year. I remember seeing Fargo in March of that year and the frakkin' English Patient comes out in late fall and takes the prize. I HATE THAT.

I don't care who wins the Academy Awards at all anymore. I used to care, I guess, back in the 1990s, but then I realized that it's like a bunch of executives sitting around and giving an "executive of the year" award. It's irrelevant what I think.

Yet, I wonder if winning any major awards will make Coen movies or Anderson movies better or worse? I'm curious about that. I can't imagine that winning an award will somehow make them better artists, and it might force them down a more conservative path, which would be TERRIBLE. Or, it might just help them get money to do what they want, which would be great.

Here's how I look at it:

Of course, it doesn't really matter who wins. But it would be great to have suffered through the whole thing (wife's an award show fan) and have the Coens (probably with Spike Lee and Jim Jarmusch and to a lesser extent, John Sayles, my favorite filmmakers) back and forth to the stage (especially if they get Editing).

For them and PT Anderson, it won't change a damn thing about the way they make movies and that's good. But the archivist/recorder of history in me wants to see better DVDs of Raising Arizona, Miller's Crossing, Barton Fink and Hudsucker Proxy in my collection. That is the type of thing that you get with a major award like that. Plus it wouldn't hurt to see some articles and books on them in the stores and on the web.

"Cloverfield is what the War of the Worlds remake wanted to be..."

I so agree with you.