Ghost Rider #20: This Sucker is Good 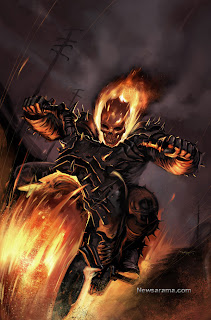 I expected Jason Aaron's debut on Ghost Rider to be strong. His work on Scalped has been phenomenal, and his fill-in issue of Wolverine last year was one of the best single issues I read in 2007. Aaron even made Ripclaw interesting during "Pilot Season." So I expected his take on Ghost Rider to be worth reading.

But I was wrong.

It's far more than just "worth reading." With Ghost Rider #20, Jason Aaron has planted his flag in the Marvel Universe and said, "I will kick your ass with greatness."

I've seen hundreds of writers take over hundreds of comic books, but only one other time have I felt this way about a new creator taking over after an initial, lackluster run by another. That time was 20 years ago, when relative newcomer (to American comics) Grant Morrison took over for Paul Kupperberg on Doom Patrol. I had been a fan of Morrison's work on Animal Man and I expected his Doom Patrol to be much improved over the tepid Claremont riff Kupperberg was doing on the title, but the way Morrison immediately made the comic his own was shocking and exciting.

I felt the same way about Ghost Rider #20. Aaron comes from a much different background from Morrison, obviously, and their approach to comic book storytelling is distinctly different, but they both have a strong voice, and strong personal interests, and their writing bleeds with passion and vigor.

Jason Aaron has recast Ghost Rider into what it always promised to be: a badass southern grindhouse rock opera with a demonic angel on a flaming chopper. He's thrown in switchblade nurses and ghouls on the road. He's escalating the comic into something great.

And you should start reading it, now.
Posted by Timothy Callahan at 8:25 AM

Where are we at with GR, Tim? Is this one of the "good jumping on points"? Is he Ketch, Blaze or what?

I'll admit I looked through the first mini when I was picking it up for my brother-in-law and it looked nice, but I haven't read it since the early 90s.

The Morrison comparison is intriguing, especially since he's always used as a comparison to "crazy" writers. I haven't heard anyone use that for a new writer.

I'll check this out.

It's a perfect jumping on point. I haven't read much Ghost Rider ever, and this issue clearly starts something new. In fact, I tried reading some of Way's run on this title just to prepare for Aaron's arrival, but I found myself just skimming through, not interested in the thin plots in previous issues.

No, issue 20 of Ghost Rider (just like issue 19 of Doom Patrol) is the real beginning of the series.

OH! While we're on the subject of new beginnings - does anyone out there know WHY Alan Moore' "first" issue of Swamp Thing is listed as 21 - "The Anatomy Lesson", where they retcon the nature of the ST - when he actually wrote 20? It's never reprinted (and they're on the 3rd time reprinting now) and would actually make a nice bit of symmetry with Morrison's DP (Moore - 20-64 and Morrison - 19-63). I have it - it cost me a bunch 5 years ago, and it's not terrible, tying up some loose ends and setting up 21, but it seems like comic history is engaging in it's own retcon.

I had to track down Swamp Thing issue 20 too, since it was never reprinted. I started reading Swamp Thing when the first Moore tpb came out and ran into Steve Bissette at a comic shop (the owner was like, "hey, this is Steve Bissette. He's an artist.") I had no idea of his greatness because I was a stupid teenage boy shopping for back issues of the 1970s "Joker" series.

But Alan Moore didn't take the series in the bold new direction UNTIL #21, so it makes sense that #20 isn't in that first tpb. Morrison and Aaron take their series in a new direction immediately.

And, btw, it is the Johnny Blaze Ghost Rider.

Who am I to argue with a comics fan extraordinaire such as Timothy? But I want to gently bring the following point, straight from my personal aesthetic idiosnycrasies, into the discussion: There's already way, way too much "badassness" in American comics - which is also the reason why Lethem and Dalrymple's "Omega" is so refreshing. I don't know Jason Aaron's "Ghost Rider", so take this please only as a short comment on the general "badass situation".

I can see how you might think so, much how much "badassery" is there really? Most of it is faux-badassery. A lot of posing and flexing and acting sullen. Name some comics that you think might be considered badass, and I'll tell you that most of them are not.

Aaron's Ghost Rider is, though, in a down and dirty way that perfectly fits the premise of the series.

And Omega IS refreshing, I agree. But so is Ghost Rider, because it's the real deal.

Picked this up on your recommendation--it's a pretty good read. I must say I loved Aaron's text piece at the end of the issue if only for the introduction.

Wow, really? Geez, I might have to buy this, then. I knew Aaron was good, but still... Ghost Rider? Huh.

There are no bad characters, just bad haircuts.

Finally got around to this one and it was pretty good; definitely interesting enough to stick around for the arc. Hope to see more less of the Tarantino bits and more of the philosophical/religious stuff.

I think it diminishes what Aaron is doing by calling them "Tarantino bits," because Ghost Rider is clearly a 1970s, exploitation-style creation and it's completely appropriate to draw from 1970s iconography and cinema to tell Ghost Rider stories.

I don't care if it's just straight exploitation fun or it veers toward religious themes, I'm definitely along for the ride.

You're probably right about that - a cheap shot at best. But I was not in the "Grindhouse was awesome" tent this year. I felt really rooked by the project and didn't think that Tarantino's piece was anywhere near as good as the stuff he's done.

So that was that talking.