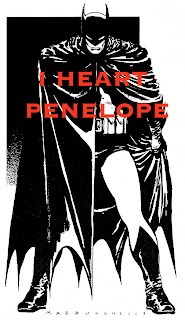 David Mazzucchelli, of Batman: Year One, Daredevil, City of Glass, and Rubber Blanket fame, told me at the NYCC that he has a 300-page graphic novel scheduled for release in the fall. A "book publisher," he says, not a comic book publisher, will be releasing the graphic novel, but since the contracts haven't been signed, he can't officially announce the details. When I asked him about the story, he said, "oh, it's your normal tale. [pause] Of a man. [pause] Trying to return home. [pause] And having adventures along the way." He knew I was a teacher, because of what we'd been talking about earlier, and so I smiled and said, "sounds like a book I teach every year. [pause] To freshmen." And he just nodded.

So I guess we should be looking forward to Mazzucchelli's Odyssey sometime before Christmas. I would put it on my wish list, but, let's be honest, I won't be able to wait until Christmas. I'll be pre-ordering as soon as possible.
Posted by Timothy Callahan at 8:49 PM