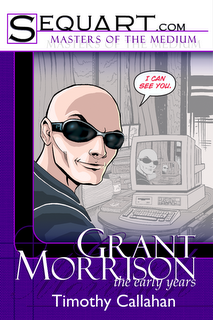 One year ago, as mentioned in one of my very first blog posts ever, I ventured to the New York Comic-Con and spent a few minutes talking to the guys from Sequart.com. Next week, after a year of scholarly study, monastic discipline, and napping, my book-length study of Grant Morrison, now entitled Grant Morrison: The Early Years, published by Sequart Books, will premiere at the 2007 New York Comic-Con. As far as I know, this is what the cover will look like. We went back and forth on the image (Grant's wife didn't like the likeness at first, but artist extraordinaire Kevin Colden cleaned it up, adjusted the colors, fixed Grant's nose, and produced the masterpiece you see here today), and I objected to the original color of the frame, which was a harsh purple, but we worked everything out and agreed on this design. I'm very pleased with how the book looks, and the contents should be equally impressive. After all, I wrote it. And it's got like 200 footnotes. You know how I love footnotes. If you don't, then I'll tell you: I love footnotes. A lot. They are the best notes around. Far, far better than endnotes. And if there are any other notes around that I don't know about, I'm sure footnotes kick their asses as well.

So if you're in New York City next weekend, stop by the Sequart booth at the Comic-Con. Buy multiple copies of this book, because it's a LIMITED EDITION. It won't be available to the public until March. If you can't get to the Comic-Con next week, you'll have to wait until then to purchase it at Amazon. Seriously, though. It will be worth the drive to New York. I mean, it's a book. It's got a cool cover. It's got hundreds of pages written by me, and did I mention the footnotes?
Posted by Timothy Callahan at 3:34 AM

Congratulations. We've yet to (net) meet, but I've been reading your sequasrt column for a while and salivating for the next one for months. They've been an awesome, insightful read. Does the book feature further columns, articles, etc? Or is it a reprint of the articles (plus the interview with Grant)? I'll be getting it either way.

The book features slightly revised versions of the Sequart columns (now with FOOTNOTES!) plus a bunch of new stuff: Lengthy essays on Arkham Asylum and Batman Gothic plus the 20-page interview with Grant Morrison.

how did I miss hearing about this?

I shall hunt down this book immediately!