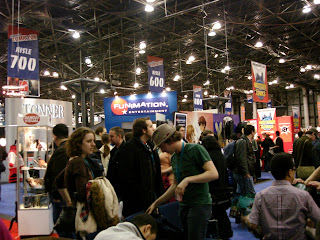 I had four reasons for going to the NYCC this year. (1) My Grant Morrison book was being launched; (2) I needed to look for some Legion of Super-Heroes comics so I could come closer to completing my collection of everything Legion; (3) I wanted to hang out with the cool people I've been working with for Sequart, most of whom I'd never met face-to-face; and (4) I loves me some comic books. Any one of those reasons would have compelled me to attend the show, but all four of those reasons combined into an unstoppable force. Even the pounding Nor'Easter of Friday morning couldn't stop me from making the three-hour drive to the city. (Okay, it wasn't that bad of a storm, but the roads were pretty dicey up here in the north, and so we only drove halfway before hopping on the Metro North.)

Since we only went down on crazy Saturday last year, I had no idea how casual Friday could be at the Con. It was nice being able to just aimlessly wander around and chat with people before the crowds arrived at 4:00. I should have been more active though, especially in Artists' Alley. I could have picked up a bunch of sketches when things were slow, but I wanted to scope everything out first, and, of course, by the time I did (at my leisurely pace) the place started getting busy and I missed my chance (or I would have had to wait in lines to talk to people, which I refused to do). I'll remember to make better use of Friday next year.

Judy and I did get to speak to Paul Levitz again this year for about five minutes. I had corresponded with him a few times over the past year regarding the Morrison book, and I showed him the final result. I mentioned that Judy was a Stuyvesant grad like he, and his response to me was, "You just bumped up a few notches now that I know you bagged a Stuyvesant girl!" Then we talked about Legion stuff for a while, reminiscing about some of the classic Hamilton/Forte stories when I brought up my son's interest in the new Legion cartoon. Paul said those classic Silver Age stories are perfect when you're six. Although, as we all know, those stories are perfect no matter how old you are, especially if you can appreciate the genius of Bizarro Computo. I mean, Bizarro-freakin-Computo! Come on! It just can't be beat.

We didn't do much buying during our first lap around the Con floor. I literally didn't buy anything, which shocked Judy, as she (a non-comics fan) out-spent me during the first few hours by purchasing $20 in First Second graphic novels. Of course, by the end of the night, I'd shelled out $150, but that's not too bad. I mostly picked up those Superboy and the Legion issues I was missing (pretty cheaply) and a few things like the Shazam! and Elongated Man Showcase volumes plus the two George Khoury Alan Moore books from TwoMorrows (his Kimota! book is out-of-print, and I hadn't been able to find it anywhere, even ebay, so I was glad to snag it for $10). Judy and I also filled about 5 large shopping bags with free stuff. Friday is a bonanza for free stuff, especially paperback books, as publishers are trying to get these preview copies into the hands of as many people as possible. We paid for it later, having to lug all that stuff around NYC, but who can resist mountains of free stuff? Not us!

After all the getting and spending, we got to hang out with the Sequart peeps for a bit. Since Judy was with me, I didn't really want to sit at the table (plus, they only had one chair anyway, which they had to pay $45 to RENT for the weekend--how ridiculous is that?) and sign copies of my book--I knew I'd be able to do that Saturday. 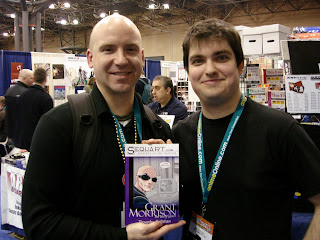 But I did get to finally meet the brilliant artist Kevin Colden (here's a pic--that's me on the left and Kevin on the right, posing with what is probably the finest work of critical literature ever written). Kevin illustrated the cover of my book, and I'm more than pleased with how everything turned out. And, as you can imagine, he's a super-cool guy. I'm sure we'll work together again in the future, after he's done drawing me those 58 Legion of Super-Heroes sketches he promised (just kidding, Kevin. Or am I?). Anyway, Kevin's sure to become a big shot one of these days, so check out his work on Todt Hill over at The Chemistry Set. 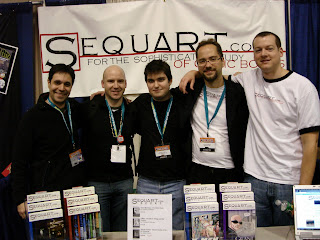 After making some sweet man-love and talking about how awesome we all are, all of us Sequart guys posed for this photo (suitable for framing). From left-to-right, that's Marc Sobel (writer of the "Shelf Life" column), me, Kevin, Julian Darius (founder of Sequart.com), and Mike Phillips (editor-in-chief of Sequart.com). All of the people in this picture are geniuses, and if you were at the Con and you didn't stop by the table, you really missed the opportunity of a lifetime. I doubt you'll ever get a chance to redeem yourself. Unless you show up at NYCC next year. And visit the Sequart table. Which you should.

Later on, after the place became much busier, Judy and I spent some time hanging out at Artist's Alley. In other words, we waited until it was busy to hang out in the smallest, most cramped section of the Con. Turns out, that wasn't the best plan. Since it was a bit too crowded for us, we didn't stay up there (yes, Artists' Alley was not, in fact, an Alley, but an upstairs room), we just basically walked past everyone and only stopped at a few tables. Brian Bolland had a huge line, which caused a lot of congestion in the flow of traffic (and it didn't help that he was across from Neal Adams), so we didn't really stop to chat with anyone. 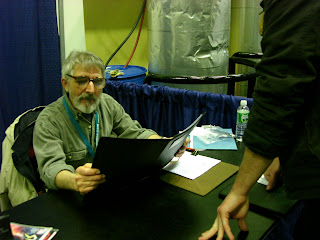 If I had more time, and more patience with lines and crowds, I would have stopped to talk to Jose Luis Garcia-Lopez (pictured here at his booth). I'm a huge fan of his work on two projects in particular: Atari Force, which I will someday write about here or at Sequart, I'm sure, because I love it! and Twilight, the deconstruction/reconstruction (Julian and I could discuss this all day) of the DC space heroes he drew based on Howard Chaykin's script. But, instead of stopping, I just got a quick pic. 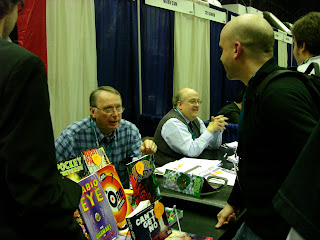 I did stop to talk to, and buy a signed copy of Abraxas from, the great Rick Veitch. Veitch is a creator who has been as innovative and important to the medium as guys like Moore, Morrison, and Miller, but he has received none of the critical attention that the others have. I told Julian that I'd love to see someone do a critical book on Veitch, and he enthusiastically agreed. He said, in fact, that he would write the book, but he wanted to wait for the conclusion of the Heroica trilogy (which began with Bratpack and Maximortal) before writing about Veitch. I disagreed, because it doesn't look like Veitch is going to finish that trilogy anytime soon, and his body of work is amazingly substantial without it. I mean, this is a guy who has not only written and drawn the above-mentioned books, but he has also created The One, a powerful run on Swamp Thing and worked with Alan Moore on Miracleman, Supreme and Greyshirt among other things. This guy is clearly a major creative force in the medium, and he has been for 25 years. Anyway, Rick, if nobody writes a book about you by the time I finish my studies of Grant Morrison, you're going to be my next big project.

After talking to Rick, Judy and I said our goodbyes to the Sequart crew and headed home. As I mentioned in a previous post, getting all those heavy bags home was a pain, and it wasn't really worth it since we won't read 80% of the free books we received. Who has time when there are so many COMIC BOOKS to read!?!? (Especially those enticing ones written by Grant Morrison or featuring an entire LEGION of super-heroes--I mean, who can resist?) 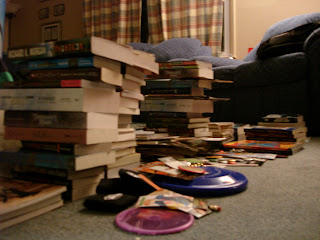 When we finally arrived home and unloaded the stuff, the piles looked like this. These giant stacks depicted here are all things we got for free. You might be able to see one or two books on the far left and far right that we actually bought, but all the stuff in those towering piles in the middle were the give-aways. Now you can see why our bag ripped open and why the walk to the train station was less fun than it might have been. But, hey, free stuff! And that was the end of the first day.
Posted by Timothy Callahan at 12:27 PM

Cool, wish I could've come back home for the show... by the way, what were all those sequart books in the picture down there? The only ones I knew about were the Batman Begins one and yours. It looks like some X-Men book and the DC Canon is there as well. None of them seem to be listed on the site.

Like my book, the other two haven't been officially released yet. We're looking at a late March launch for the nationally-available versions (aka you will be able to get them on Amazon then), although I'm not sure if they will all be ready by then. Definitely by the summer.

But, if you're interested in a little preview, the other two books are "The DC Canon" by Julian Darius (a book which identifies the major stories from the DC Universe, and ranks the top 5 Batman stories, top 5 JLA stories, etc and then proves WHY those were the best from a sholarly and aesthetic point of view) and "X-Men: The Movie Trilogy and the Comics" by Tom McLean (a book which gives the background on bringing the movies to the screen and does a comparison between the comics, the screenplays, and the finished films).

This is what I get for not reading your blog sooner. I sensed some connection between us greater than merely me purchasing your book...but who could have guessed it would be Stuyvesant High School and LSH fandom?