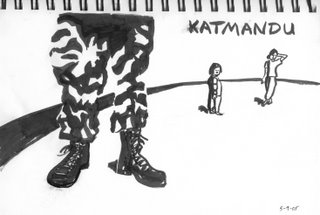 Here's a piece I did last year in my sketchbook based on an image from some magazine--Harper's probably. I was just playing around with geometric shapes and brushwork here, and I like the way it turned out, though when I erased the pencil lines everything smudged and blurred. Which adds a bit of humanity to the image, I guess. I tend to prefer things a little more polished and cold, and that makes a lot of my drawings lifeless, so I've tried to make an effort over recent years to loosen things up, mostly by using brushes to keep me from being to conservative with my line.

I'm going to be posting a bunch of sketchbook pages in the coming weeks, all of which come from the past two years. I've filled up 2 1/2 sketchbooks since then, but for the first three decades of my life I never kept a sketchbook at all. Instead, my doodles and illustrations were always done on random sheets of paper that I may or may not have thrown away.

It's nice to actually have my recent stuff bound together in these sketchbooks, though. I really should have started the process much earlier. That's my sage advice for the day: start a sketchbook, fill it up, then start a new one. It's fun for the whole family!
Posted by Timothy Callahan at 7:15 PM

hey callahan, that is a nice sketch. why dont your write graphic novels? and when is your free period?