When I was in college, Wizard magazine (which I actually read back in those days, before the interweb), in cooperation with DC Comics, ran some kind of Batman try-out contest. The winner would get something cool--like maybe publication or something. Anyway, you had to draw this Batman sequence that they gave you the script for. The first panel described a moonlit Gotham City, and then the other panels went on to describe the Batman swooping down and I think maybe Man-Bat was in the sequence? I really don't remember the details. It was during the time of the Azrael Batman, by the way, so his costume was all Robocoppy, which definitely detracted from any kind of moody effect I wanted to achieve.

Because of this, or because I never finished anything I started back then (see Mr. Potato Head for details), I only drew the first panel for the contest. This is the result: 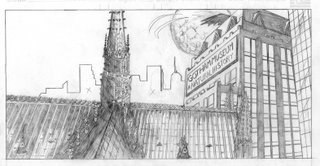 I wanted to amp up the gothic imagery in the cityscape, and what could be more gothic than Notre Dame cathedral? So I plopped it right down in the foreground and left the more modern buildings in the middle ground. I like how it turned out. It's certainly the most detailed architectural rendering I've ever done, and although I'm not happy with the old-school cape effect up top (looks more like Bob Kane than even I intended), or the way the right corner of the cathedral lines up with the front corner of the Natural History Museum (the cathedral should extend a bit further to the right), I think it's a cool image.

I mean, it's Gotham City! Right?

Although if I had to do it again, I'd definitely put some kind of giant dinosaur skeleton on the roof of the Natural History Museum. Nah, that would be dumb.
Posted by Timothy Callahan at 9:35 PM

I've always been a customer of your Ninja Wolf Comics and I have seen Ninja Gerbal and Samuri Squirrel in full glory first hand, along with your other little sketches, but this one amazes me. Looking on this blog and seeing all your drawings, you have a serious amount of talent. The detail in this batman picture is staggering. I am in much awe of your work and my appreciation for it is immense. I love it. Good job Callahan! Keep it up so I can keep being impressed and jealous!

P.S. My first film will be out by the end of October...maybe I can come in period C and show it sometime and talk about the true film-making experience!

It has potential but the addition of the Cathedral almost seems like it was cut and pasted from another picture. The perspective of the cathedral and the building in the background are so disconnected all it really serves is to make me look for more problems. The details are immense (some a little blurry, I don't know if you use a mechanical pencil but I would suggest switching to a harder lead and a finer point) but again, your perspective for the picture is just substandard.