Frank Miller and I

In addition to my ungodly love for any archive editions, I can't resist the higher-end Absolute Editions published by DC either. These things are massive, oversizes hardcover editions of the greatest works in recent comic book history, and they come complete with extra pages of commentary, or artwork, or whatever they decide would be cool. I have several of these suckers so far, and with so many new ones being released over the next year or so, I'm doomed to poverty. 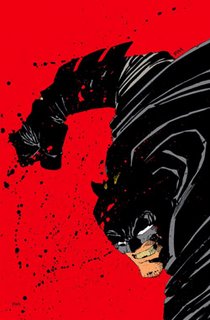 The most recent one, by the way, is the Absolute Dark Knight. My recent posts may lead you to believe that I loves me some Batman. That's not exactly true. I actually prefer Superman. In fact, if I had to rank superheroes (which is stupid for me to even think about, because I buy comic books for the creators, rather than the characters), I would place Green Lantern and Flash even above Superman. So I'm not a big Batman guy. But I do love Frank Miller, so I couldn't resist this giant book, which collects The Dark Knight Returns along with The Dark Knight Strikes Again and some other supplemental sketches and original proposals, etc. I haven't actually read this volume yet, so I'll hold off on commenting upon it in more detail. I've read the stories several times in earlier printings, but it's been years since I've revisited either, so I'll let you know if my previous opinion still holds up. (For the record: my previous opinion would be that Dark Knight Returns is savage and brutal and shockingly good and Dark Knight Strikes Again is sloppy but still excellent--and I've always thought the negative criticism it received was due to expectations that were unrealistically high and inconsistent shipping dates when it was first released. But we'll see if that opinion holds.)

The point of this post is that I've always loved the stark, blocky, boldness of Frank Miller's style, and in going through my older artwork, I found an early tribute to his work. I thought this was interesting because it actually shows a bit of my process, and it shows how pathetically unoriginal I was back in those days (as opposed to today, when I'm expertly unoriginal). Here's the rough sketch I drew over a dozen years ago: 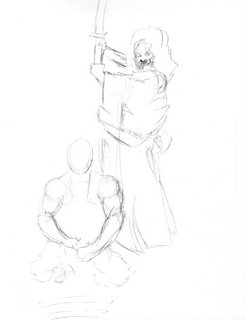 It's clearly based on Miller's Ronin, which is the story a science-fiction samurai. I might not have recognized the sketch as a Miller homage, though, if it wasn't accompanied by my finished piece: 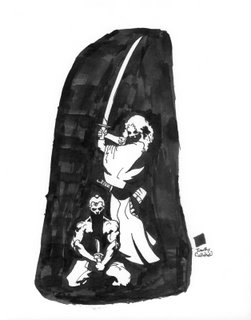 Now this looks good, right? Except it's TOTALLY copied from a Miller illustration. But you can see that I at least improved my plagiarism between the sketch and the final, inked drawing. I can't remember exactly what I was thinking at the time, but I knew I thought of this as a "study" of Miller's drawing style, and for some reason I got the scale completely wrong when I did that first sketch. Anyway, I still love Frank Miller, but I don't copy his work anymore. Maybe I should. Maybe it would help. And, by the way, I also found other examples of times I "swiped" a pose or a design from another artist, and I will be posting them someday. For now, though, marvel at the awesomeness that is Frank Miller, as interpreted by me.
Posted by Timothy Callahan at 11:45 PM