Teenagers from the Future at NYCC 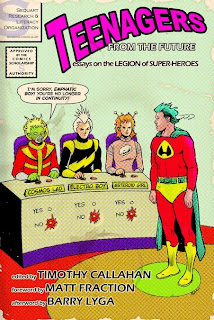 If you're going to be at the New York Comic-Con, make sure to stop by Booth #2445 (located right next to Artist Alley) and get your copy of Teenagers From the Future: Essays on the Legion of Super-Heroes. Sequart's own Mike Phillips will be on hand to tell you all about upcoming Sequart projects, and I will be around most of the afternoon Friday and Saturday if you want to stop by and say, "hey" or talk to me about Grant Morrison, the Legion, comics, or your favorite episodes of "Turbo Teen."

The Teenagers from the Future book ended up being 330 pages of Legion awesomeness, including:

Me on "Thomas, Altman, Levitz, and the 30th Century"

Richard Bensam on "The Death of and Resurrection of Lightning Lad"

Chris Sims on "The (Often Arbitrary) Rules of the Legion"

James Kakalios on "The Legion's Super-Science"

Lanny Rose on "The Amethyst Connection"

Alan Williams on "Gender Identity and Homosexuality in the Legion"

Matthew Elmslie on "Generational Theory and the Waid Threeboot"

And Much, Much, More!

See you all this weekend.
Posted by Timothy Callahan at 5:49 AM

Yes, I was wondering the same thing.

What about the rest of us? When will the Left Coast be served?

Not me, you won't! I will be here proctoring an exam and then seeing a Jays game in Toronto.

The left coast is going to have to wait until May or June when the book is available online! Because I can't really afford to go to San Diego. Unless someone wants to give me a place to sleep for the week.

I can't be there but it's going to be like Christmas anyway.