Wednesdays: Come Out and Play 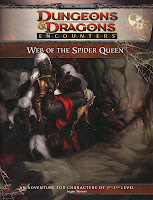 On Wednesdays, beginning on May 16th and running for the next three months, I will be running D&D Encounters at Fantasy Realms in Pittsfield, MA from 4:30-6:30 each week.

The May 16th session is for character creation, and each following week will feature a mini-installment (or encounter) of the "Web of the Spider Queen" adventure written by Logan Bonner.

The whole purpose of the D&D Encounters program is to bring in new players, and to have some regular fun for people who can come in for a week, but might miss other weeks, and everyone can still have a good time. If you don't create a character -- or bring a suitable character to play (email me for details) -- then you'll play one of the cool pre-gen characters provided by Wizards of the Coast.

Why am I running D&D Encounters locally? Well, I want to play it, and no one else is running it, so I might as well just take charge of the thing. And I've been running D&D games at home with friends and family for the past two years and a little bit after school this year, so I figured making it a formal weekly thing would be a good idea.

All my friends and family members and anyone else can swing by on Wednesday afternoons and play.

It's limited to 5 players per week, so contact me or Fantasy Realms to sign up for certain Wednesdays, and I will see you there!
Posted by Timothy Callahan at 9:34 PM