Partially disoriented by the magical befuddlement of the Minotaur Maze in the Caves of Chaos, Bob the Dwarf, Lily the Halfling, Cary Cycax, and new girl Lucy battled a dozen pesky stirges, which didn't do much damage but took about ten rounds to wipe out and didn't gain them a single coin of treasure, which they didn't much enjoy.

Aimlessly wandering left, then right, then left, they chanced upon the cavern that led straight to the Minotaur's hangout. Making plenty of noise as they approached (they all rolled below 10 on Dexterity or Stealth rolls), the Minotaur came charging.

For this big battle -- likely the final combat before Television's Ryan Callahan and the heart-and-soul of Cary Cycax had to head back to New York City as the weekend drew to a close -- I decided to spring the Dwarven Forge pieces out of semi-retirement. It was a chance to test D&D Next with a tactical battlefield. The theater of the mind gave way to miniatures and 5'x5' squares. Line of sight could be clearly determined. It was new D&D, 4e style.

I like playing 4th Edition, and I've seen players of all ages pull some fun tactical combos during combat. But D&D Next, until this Dwarven-Forge-enabled session with the Minotaur, felt more wide open. Anything was possible.

The Minotaur battle, with the D&D Next rules, but the detailed 3D battlefield and miniatures felt clinical compared to the fun we'd been having with the new rules until then. Here's what happens: once you turn the game from a conversational, improvisational, imaginative game with some dice rolls to a game that has a board and tiny little figures and a specific dimensionality, the creativity turns from artistic imaginings and "yes, and..." to precise tactical moves and linear decision-making.

Let me put it this way, when you play Monopoly, you don't imagine that you are actually a giant top hat marching through Atlantic City, wheeling and dealing with renters. Once D&D takes a miniature-based focus, it becomes a game where the attention is on what's in front of the players on the game board, rather than what the players themselves are doing and saying.

And 4th Edition cannot accurately be played without miniatures and battle maps. D&D Next can. And should.

It was a good idea to test D&D Next, in this Minotaur encounter, with minis, to see what happened. But the battle was dry, almost colorless, compared to the previous battles. So now we know. Leave the Dwarven Forge in the basement. Use it to re-enact Dolph Lundgren Punisher scenes with Heroclix.

The Minotaur battle also taught us another thing about the mechanics of D&D Next. The "Disadvantage" disadvantage is devastating. The Minotaur was blinded in the first round, and though he lashed out at Bob the Dwarf and hit him a few times, he stumbled over rubble and missed far more often than he hit. And Lily and Cary Cycax blasted away from a distance, doing over 100 damage to the Minotaur in just over a handful of quick rounds.

It's worth noting that D&D Next, already accused of giving less options to characters, didn't become roll-hit/miss/damage/or-not/go until we played with the miniatures. It was the context of the game, not the rules themselves, that changed it to become more vanilla.

Luckily, the flavor returned to the game when the Minotaur was killed, Cary Cycax cut off his head as a trophy and the hidden treature horde was found. Secure in the hidden treasure room, the adventurers camped out and took their first long rest since entering either the Gallery of Death or the Minotaur Maze. And with some time on his hands, and the smithing/armoring skills of Lily the Halfling, Cary Cycax decided to customize his scale mail, by weaving the Owlbear hide into his protective gear.

By the next morning, the adventurers were ready for more, and Cary Cycax, Cleric of Pelor, had a new, intimidating look to match the brave face he wore as he prepared for further adventures in the Caves of Chaos: 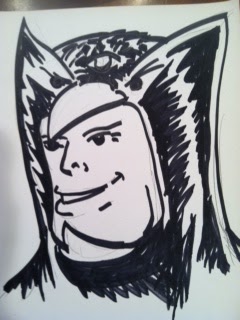 THE END (FOR NOW)
Posted by Timothy Callahan at 7:00 AM

I don't agree at all! Or well, not entirely. I have always liked minis-- I run my main campaign with the World of Darkness rules even though it is fantasy, & I use miniatures in that, even though WoD is truly "theater of the mind." It helps give people something to look at in a fight, it reminds people there is terrain to take cover behind or take advantage of, that there might be fire pits or rivers or furniture to factor in. It makes it so people can keep things straight-- "wait, I thought I was right by the evil wizard?" "No, you were fighting orcs, the orcs are on the other side of the bridge" "But I was just biding my time till I attacked the wizard, can I take it back?"-- & it gives the players who are waiting for their turn something to look at. PLUS minis are cool...your labyrinth is cool!