The Splash Page: "Dark Reign" and Stuff I Don't Care to Talk About 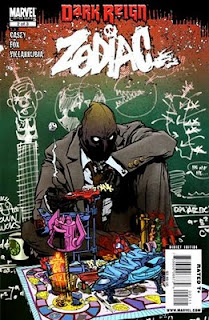 Here's what happened: Chad Nevett bet me a dollar that I couldn't keep the conversation to just plot and character. And he won that bet pretty handily. Who they hell can just talk about the characters and the plot all the time? These things aren't really happening. These characters are not real people.

I will never pay him that dollar, though.

Oh yeah, the discussion started on Chad's blog, and continues below:

CN: In "Dark Reign," I pretty much only saw what happened in the Bendis titles, "Secret Warriors," and "Dark Reign: Zodiac" with random issues of other titles thrown in for reviewing purposes, but you got a wider view, I assume. How do you think the event played out beyond the stuff I read?
TC: I don't really know. I read "Punisher" and that used "Dark Reign" to brilliant effect, I thought. (Even to the point of Norman Osborn getting so annoyed at Frank Castle that he had him chopped to bits.)

But besides the stuff that you cite above, I don't know how it's really affected anything. "Thunderbolts" was interesting for a little while, as we had double and triple agents in play, but I dropped that series once it crossed over with "Deadpool" and became terrible. "Amazing Spider-Man" has barely been impacted, beyond the "American Son" storyline, which was decent enough. Obviously the space stuff with "Nova" and "War of Kings" hasn't been impacted at all. Neither has the X-Men stuff, really. I mean, there was the Utopia crossover, and I guess that could have been sparked by the Osborn-in-power plot, but it could have happened without it.

Let's step back, though, and look at the bigger picture. "Dark Reign" has given us plenty of comics with Norman Osborn and company flying in and stirring up trouble, but what has Osborn and his crew actually accomplished so far? They haven't really accomplished anything, have they? Are they just the mechanism through which Captain America, Thor, and Iron Man can again be best buddies? Is that all this has been about for the past year? Because that's clearly what it's building towards.

CN: He had the Punisher killed. And... yeah, he didn't really do much. He had some good talks with the Sentry. For all of the talk about how things got worse with him in charge, Osborn didn't really abuse his power in any extreme ways. He acted like a jerk at times and made deals with some bad people, but other than that... Though, "Uncanny X-Men" did cross over with "Dark Avengers" and was a big part of "Dark Reign" during the summer. His impact on the mutant community is probably the biggest thing that came out of "Dark Reign" aside from setting up the Holy Trinity of Avengers to reunite. It's almost likes Osborn was a means to an end rather than a driving force.

TC: I don't think there was too much Norman Osborn in the end. There was just enough. I mean, he's the big bad of the entire universe right now, so his presence should be felt almost everywhere, even if he's not doing anything or showing up at all.

Maybe his ineffectual "Reign" is a commentary on all positions in government. That even a really bad guy can't get anything done with all the hoops and red tape.

What do you think about "Dark Reign" coming to an end? Are you looking forward to this big Asgardian climax to the whole thing?

CN: The Asgardian plot (and the way the story apparently begins) doesn't have me too enthused, but I am looking forward to another Bendis-driven story. He's been the driving force behind "Dark Reign," so I like that there will be a consistent tone and voice and the characters will continue to sound and act like they have this past year. Nothing would be more annoying for "Dark Reign" to have characters acting one way and "Siege" having them act another. Also, I'm still holding out hope that Noh-Varr will show up and do something that proves me wrong for being so disappointed/frustrated. I am such a sucker.

One big thing I'm looking forward to is the promised revelation regarding the Sentry where Bendis has promised to lay all of his cards on the table and tell us the whole truth about the character. I've rather liked his work with the character (despite it not matching up entirely with the original mini-series) and am glad that we're finally going to get the whole story. A lot of people don't like the character and I don't understand why. He's a terrifying character and one that fits well into the Marvel universe, a universe of horribly flawed gods where the more power someone has, the crazier they seem to be. I think his power level would probably suit him better in the cosmic setting where he would fit in better, but, otherwise, I dig him a lot. Mentioning the cosmic thing just made me realise that the most obvious 'past Sentry story that we all forgot happened' is to do a Jim Starlin-esque bit where the Sentry travels the universe (as Superman has a few times) and goes through some trippy mindscape stuff by teaming up with Adam Warlock or something. Hot damn, I love that idea. Screw it, bring back Jim Starlin and have him write the Sentry. I'd like that, I think.

TC: The Sentry is widely hated because he only ever does two things: (1) shows up as a deus ex machina, or (2) runs off crying. So if Bendis can make the character more than that, then, yeah, that's some kind of victory.

I liked the Jae Lee art on the Sentry's original series, but that's about it. I would have preferred the Rick Veitch version. Too bad that never got off the ground.

And, hell yeah, let's see the character do some space trippy stuff with Adam Warlock. I'd be all about that action. (I don't think that's going to happen, though. I think the "lay all the cards on the table" will be something far more mundane.)

I am curious to see what Marvel does post-"Asgard Attacks." Quesada wants the company to take a breather and just tell classic stories set in the Marvel Universe, with no major events. That sounds good to me, but it's been so long since the comics have been that way, that I wonder which series will thrive and which series will falter because of it. Seems like Bendis needs these kinds of uber-plots in his Marvel stuff, even if he's designing them, but he has shown in "Ultimate Spider-Man" that he's much better when he doesn't have to worry about event-thinking. And clearly Brubaker has kept "Captain America" churning along quite nicely without paying any attention to the events in the mainstream Marvel U once Cap died. His only stumbling block has been the release schedule of "Reborn," and how it doesn't line up with the return of Steve Rogers elsewhere. That's annoying, but hardly his fault.

What writers and series do you think will thrive in a no-more-events-for-a-while kind of status quo?

CN: Bendis's Avengers book(s) should thrive, I hope. I'm really looking forward to Matt Fraction on "Thor." I know, I've been down on Fraction a bit lately, but his work on the character previously has me convinced that this run will be nothing but solid gold. Honestly, I'm still struggling to think of what titles are heavily affected by "Siege" (or any events) that a lack of events will make them a lot better. Maybe a freer status quo will lend itself to a general feeling of creative freedom throughout the company where writers won't worry about what's going on anywhere else and just go wild. Maybe we'll get a return to an earlier-in-the-decade-Marvel level of quality. Wouldn't that be something?

TC: I'm sure the plots and characters will be improved all around.

That was my pathetic attempt to circle around to the beginning. Let's never talk about just plot and character again, okay? (Ever.)
Posted by Timothy Callahan at 11:36 PM

I will collect my dollar, motherfucker.

A Canadian dollar is worth like, what, 72 cents? I say let's go double or nothing that you can't go a month without looking at that Joe Casey poster in your bedroom.

Like Michelle would let me have a Joe Casey poster in our bedroom...

And I suppose your wife lets you have a Grant Morrison poster in your bedroom...

I have a mirror and a bald head. I'm good to go.

It's like the Splash Page is our TV discussion show and this is the web-exclusive 'after the cameras' are off version where we don't need to bow to network concepts of what's appropriate. Sort of.

It will be interesting to see how this promised "no more events"-philosophy will work out. I do think it will mean a dip in sales for Marvel, as more and more of their not-that-great, not-that-integral books decline steadily into oblivion without the sales spikes of events slowing the process down.

Also, will it really mean all that much more interesting books? I'm no event enthusiast, but it seems like no matter how you do it, a book like Captain America has pretty strict limitations on just how off beat or radical it can be, even in a world without a lot of events and crossovers. I don't know, maybe it's the fact that I'm not really loving anything Marvel is putting out at the moment, but I can't really see how this secures a healthy crop of interesting comics any more or less than annual crossovers do. I enjoy Amazing Spider-Man and I buy Uncanny X-Men as well as Captain America and Daredevil in trades. But the latter two have both become rather trite and boring lately and with Iron Fist gone to the dogs and Fraction's books never really having gotten off the ground, Marvel's not really putting out anything all that thrilling lately (excluding Brubaker and Philips' creator owned stuff).
And, to paraphrase whoever it was; the idea that you need to "tone down" superhero comics and keep them from being "too big" or "too crazy" is frankly ridiculous. Now, it might be that it was Mark Millar who said that (I really can't remember) and that what he had in mind was the current "this is comics - they're supposed to be stupid!" era of insulting intelligences and digging one's own grave, but there's a good point in there somewhere. I really don't want to read a bunch of books where writers get to focus on getting the characterization of a bunch of spandex-clad fictional characters right.

Shecky, that sounds about right to me. I want madness!

When does Fraction hop onto the Thor book? I'm god-diddly-damned stoked for that.