The Splash Page: Comics and Wrestling, Because We Like Tight Pants Part 1 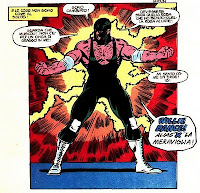 Remember when Chad Nevett and I used to write a weekly column for Sequart.com? That site will return one day, I'm told. Or maybe not. But then we did this Splash Page stuff on our blogs and even at CBR this summer. It's pretty much all I ever post here at Geniusboy Firemelon these days, but I'll make that up to you sometime. I'll buy you a nice present or something. Until then, read this week's installment, which is mostly about how much we hate fans. Makes us seem like a couple of jerks if you ask me. Which is probably true. Jerks who are correct, though.

Chad Nevett: In this edition of the Splash Page, I'm not exactly sure what to expect since it's a bit more broadly conceived than usual. I want to talk about wrestling and comics. As many who pay attention to what I write know, I'm a big wrestling fan and write for the wrestling section of 411mania.com in a few different ways. Recently, I pissed some people off (while amusing others) by dedicating one of my weekly random thoughts posts at Comics Should be Good to wrestling but paid lip service to comics in the process. Tim, as many probably don't know, recently attended a live WWE event as, apparently, his son has become a fan of wrestling and, like the good dad that he is, Tim has tried to participate in that interest when possible. So, we've got a big fan and a dad who may or may not hate it... and we've got comics. I don't know how this will all fit together, but let's see anyway.


I've never actually understood the disdain or attitude that some comics fans direct toward wrestling since the two don't strike me as that dissimilar, particularly superhero comics. Both revolve around people fighting, often dressed in outlandish or odd attire, there are good guys and bad guys... even the fans are similar in the way they behave and discuss their respective choices of entertainment. Actually, the similarity in fans is where I first made the connection, so it seems really weird for comics fans to be so down on wrestling. What's your take on wrestling so far, Tim? I imagine it's mostly just been WWE programs you've seen. Do you find it to be 'entertainment for morons' as some do?
Tim Callahan: As I read the backlash against your talk of wrestling in your "Random Thoughts" on CSBG, I couldn't help but wonder: would wrestling fans freak out if you spent part of a wrestling column talking about comics? I'm not sure that they would. So that would seem to make wrestling fans more open and accepting than comic book fans. Just throwing that out there. It's all speculation of course, but since you do write a wrestling column, you should try it out and see if comic book fans are the more closed-minded of the two.

With that said, after seeing WWE Live, I'd have to say that I'd rather hang out with comic book fans any day. You know those stereotypical comic book guys? Those ones with the sweatpants and fanny packs and beards who can wax poetic about Englehart's Avengers all day? I'll hang out with them every day for a year before I'll hang out with the wrestling fans at the Times Union Center in Albany. These people -- this mass of kids and adults -- were rude and dumb. Little kids and their parents shouting "you suck" over and over. People paying $10 a pop for glowsticks just so they can hold up an "X" sign for Triple H. "Beat the Shit Out of Him" clarion calls from the crowd.

The guy behind me was the best, though. With his wife and two little boys. He swore constantly, berated his wife when she said that Randy Orton was "just a character," and then told his son to calm down while he, himself, was yelling and screaming at Randy Orton, calling him a "wannabe has-been." Then he insisted on telling the Miz, loudly, that he was not, in fact, awesome. As if this dude was the voice of reason.

To be fair, I didn't get any beer spilled on me, so the crowd was better than the average Fenway Park horde, but this is the level of idiocy I don't understand regarding wrestling: Sheamus got DQ-ed in the main event, giving John Cena the victory in the bout for the World Championship. Now I've only seen like three episodes of Smackdown and/or Raw in my life (all of which in the past two months as my son has grown increasingly obsessed with wrestling), but even I know that a title can't change hands as the result of a disqualification. And is John Cena really going to win the title at an untelevised house show in Albany? Of course not.

Yet the crowd was ecstatic when Cena won, as if they saw something magical. And then when the announcer explained that he couldn't win the title that way, they booed and booed and jumped up and down as if this was shocking news.

So are all these people in the crowd so stupid that they don't actually understand what it is that they're watching? I mean, they have the "You Can't See Me" hats and the DX t-shirts and the glowsticks and yet they don't understand how the shows work? Or are they playing along, like those people who dress up and sing along to Tim Curry in those midnight "Rocky Horror" shows?

Because, from an up close perspective, these wrestling fans -- or the vast majority of them -- seemed mean and dumb.

CN: I've been to a couple of live WWE events (a taping of "Smackdown" and this year's "Royal Rumble") and had a great time at both. The yelling and chants are part of the experience -- like amped up behaviour at a sporting event. Some people can go a bit over-the-top, but the audience's participation is part of the performance. The example you cite, that the title won't be dropped at a house show is good: it won't be, but what fun is it if everyone watches the match with that attitude? Part of the live show is getting into it a bit and putting that energy out there in order to get the best performance out of the wrestlers. It's not fun if you act completely logical. Cena wins, you cheer; he doesn't get the belt, you boo. It's what's expected and the audience should play its role when possible.

I can understand not being into that especially since I'm usually more subdued than the average fan as well. But, you're right, some people do get far too into it and say stupid things or take it too seriously... but, how is that different from comic fans? Having been on both comic and wrestling sites, there's little difference between the two, honestly. Maybe that's an interet thing, but take a trip over to CBR's forums and read the comments to 411mania articles and watch as the rudest, most narrow-minded people come out. It's a fan thing.

(My favourite live experience was at the "Royal Rumble," by the way, where one of the matches was fan-favourite face (good guy) Jeff Hardy against Edge, a heel (bad guy), for the WWE Championship. Now, Edge is Canadian and we Canadians are notorious for cheering our countrymen no matter what their status is (face/heel) and I'm a big fan of Edge, not a fan of Jeff Hardy, in addition to that face. So, I freaked this little kid in front of us out by cheering for Edge and booing Jeff Hardy. He could NOT believe that someone could like Edge and hate Hardy. We had fun with it as he cheered louder for Hardy in response to my booing...)

Then again, there are different 'levels' of wrestling fandom, usually separated by the terms 'marks' and 'smart marks/smarks' (though, 'marks' isn't used really except in cases like this too much). Marks are the people who buy into it, while smarks are the people who see it for the fiction that it is, but appreciate it for who gets pushed, how good a match is, and stuff like that. I know that I tend to watch wrestling in an oddly metafictional way where I'm usually commenting on how well something is done, if a storyline makes sense, why one wrestler is getting pushed with a lot of victories, while another is being buried... Watching it the way that I tend to read more than anything.

To Be Continued at GraphiContent!
Posted by Timothy Callahan at 7:49 PM

Part two is up! Everyone rejoice!

I watched wrestling twice in my adult life. Once, the wrestler picked up his defeated opponent and dry-humped him. The other time, one wrestler had attached a car battery to the other's genitals and was torturing him.

There ain't much I look down on in this world, God knows, but my limited sampling of wrasslin' watching made me all kindsa queasy.