I'll post annotations for Morrison's Batman #678 sometime in the next couple of days, but since the annotations will rely heavily on reference to February 1958's Batman #113, I'm going to give you a closer look at Zur-En-Arrh right now. If you're interested, here's a collection of all of my Morrison Batman posts. Also, click on the images below to enlarge them for your viewing pleasure. 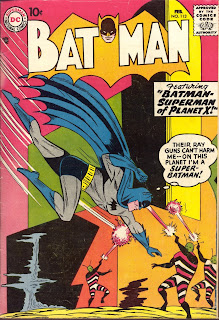 Batman #113's cover story, "Batman--the Superman of Planet X" is the relevant bit, although it's the third of three Batman stories in that one issue. The first two stories, "The Menace of False Face," and "Batman Meets Fatman," don't seem to play into Morrison's Batman run, although Fatman--a, you guessed it, overweight guy in a Batman costime--is due for a revival any day now. Perhaps as a a Vertigo book?

Anyway, "Batman--the Superman of Planet X," written by Ed Herron and drawn by Dick Sprang (according to Comic Book DB) begins with Batman sneaking out at night for a little Batplane recon, wondering why he's compelled to go out alone instead of bringing Robin with him (by the way, Batman and Robin slept in the same bedroom in the 1950s--is this common knowledge? Any trivia fiends know when they stopped being shown occupying the same sleeping quarters?). Soon the Batplane gets all whirly and spinny, as you can see here: 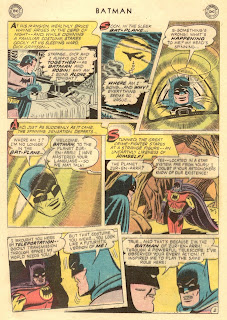 And as this page shows, Batman ends up on Zur-En-Arrh, greeted by Tlano, the red, yellow, and purple Batman of this strange planet.

Just like many other Batman doppelgangers (like the Club of Heroes, and, of course, Fatman), Tlano was compelled to become the Batman of his world by watching Batman. Batman's inspirational powers aren't just limited to Earth, obviously. Since Morrison seems to be interested in Batman doubles--and we know he's interested in Silver Age weirdness--it's not suprising to see Zur-En-Arrh/Tlano play such an important role in Morrison's Batman. Well, I guess it might be surprising if you are a casual reader who picks up the much-hyped "Batman R.I.P." and three issues into it your find yourself dealing with a Batman who has stitched together a crazy red, yellow, and purple costume. But really, the Zur-En-Arrh connection is just added texture, and all you really need to know is that Batman's going crazy in Morrison's run. Here, in the Ed Herron story, he's very sane. Super-sane. Or is he? 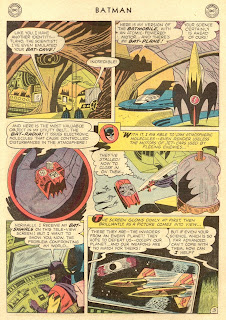 And this space-travelling Batman hangs out with Tlano and checks out his sweet alien Batcave, filled with an "atomic-powered" Batmobile and a Batplane that looks a lot like a Bat-rocket. (Because space aliens have better tech than earthlings, circa 1958, and have less fear of atomic energy.)

But the coolest, most emphasized, and least defined (well, it's explained, but the explanation doesn't make a whole lot of sense) item in this alien Batcave is actually from Tlano's utility belt. It's his BAT-RADIA, which "issues electronic molecules that cause controlled disturbances in the atmosphere." I'm not sure how that works, but Tlano says he uses it to jam the power to flying cars, so I guess that comes in handy. It's space caltops, then. And our Batman doesn't comment on how awesome the gadget is, perhaps because, like us, he doesn't quite understand the science at work. But the Bat-Radia will come in handy in issue #113, and as far as I know, won't reappear until Batman #678. 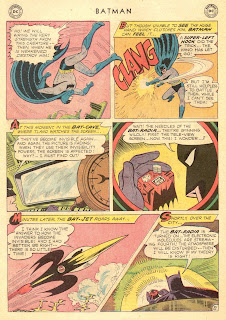 As the cover of this issue indicated, this story is all about Batman acting like Superman, because the lower gravity on Zur-En-Arrh gives him the ability to leap tall buildings and punch real hard. So that's what Batman does, helping Tlano and his people repel an alien invasion (an alien invasion featuring an army of giant robots!). But the aliens keep turning invisible before Batman can punch them good enough. What is a space-displaced superhero to do?

The Bat-Radia! Of course! "The Bat-Radia is turned on...the electronic molecules are streaming forth!" That's what Tlano says in the final panel of this page, helping out his Earth chum with his super-alien-science. Dialogue Morrison swipes, word for word (minus the ellipsis and the exclamation point) to begin Batman #678. 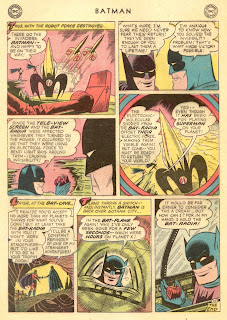 The Batmen win, sending the alien invaders away with confidence. Tlano, in particular, is sure that they "never need fear their return." Because why would aliens bother to attack when the Bat-Radia is in the house? Except, as the end of this story shows, the Bat-Radia is actually sent home with Bruce Wayne.

"Tlano throws a switch" and Batman is back in his Batplane over Gotham City. Was it all a dream, Batman wonders: "It would be far easier to consider this a dream...but how can I? For in my hand, I hold the BAT-RADIA!" Dum dum dummmm!

(The musical cue at the end was added in my mind.)

So just as Morrison begins Batman #678 with a direct quote from Batman #113, he ends it with one as well, lifting Batman's final lines and putting them in the mouth of a deranged Bruce Wayne who has crafted himself a Zur-En-Arrh-ian Batman costume. Luckily, he's got the Bat-Radia in his hand. The Club of Villains is doomed.
Posted by Timothy Callahan at 8:16 PM

Aha! I've been waiting for you to unravel all of life's mysteries.

Or, at least, the ongoing Batman mysteries.

You know, that kind of makes this issue more annoying. I mean, I can accept that Morrison is mining the Silver Age stories, but for him to be lifting dialogue from 50-year-old comics and making it so integral to the story and leaving it to smart people like you to figure it out is bad form. I mean, on the one hand, the story works without us knowing it, but it's SO much deeper if we know about "Robin Dies at Dawn" and those other stories that it seems like DC really dropped the ball because they're not using footnotes. I get that that would lessen the "mystery," but when I read here how much he lifted from those old comics, it just pisses me off. And I generally like this run.

I can understand that, Greg, but it makes me wonder about the relation of this run to other literary works that rely upon allusion like Eliot's early poetry. Now, the two are very different since one is narrative and the other is not, but there's also an ease with this Batman story that isn't necessarily there with something like Eliot's poetry. Morrison is alluding to an earlier story featuring the same character, while Eliot alludes to multiple works from various sources in many poems. Not saying that that makes what Morrison does here any less annoying, but... I'm not sure what I'm saying exactly. Dammit.

To piggyback off Greg's point, DC might do well to either list a source or go so far as to issue a quickie collection (like they don't ever do that!) of the integral issues. I paid 5 bucks for the Libra/Human Flame comic, I'd do so for something that was actually relevant.

I can sympathize with the annoyance caused by people who don't want to go back and do the research on these allusions, but I don't understand it. I've heard people say (about Morrison's work in general--and his Arkham Asylum, Invisibles, Final Crisis, and Batman in particular), "Why should I have to go online or do research to understand a comic book?"

My answer to that is: "Why shouldn't you?" and "Why should every comic be equally simplistic?"

There are certainly plenty of comics that require zero outside knowledge, and zero digging, and I do believe that you can understand Morrison's story without the extra research (he often provides a character or two who directly explains the story to the reader), but for me, the research and the digging is extremely pleasurable. It makes the comics a hundred times better.

See, Tim, that's why I read YOUR blog! Don't get me wrong, I'm enjoying this story, it's just weird that DC wouldn't make it easier to read those comics he references.

If anyone cares, I found ish #113 reprinted in the Batman in the 50's trade. Not sure about any of the other integral stories though

To the poster who asked whether Tim is mining this from a third source, the filename listed on these images ends with .cbz, so he's obviously downloaded them from somewhere...

Regarding Tlano's bat symbol, the yellow circle around it seems to pre-date the 1966 "new-look" Batman emblem from the Julius Schwartz era. Any thought?

I don't know if anyone's still interested, but the "Robin Dies at Dawn" arc Morrison references is collected in the TPB 'the greatest batman stories ever told'...I've had it since I was a kid and read it frequently, so it totally blows my mind that a modern writer is referencing these stories to such great effect...