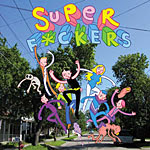 How can you not love James Kochalka? Here's a guy who has been doing his own thing, in his own inimitable style, for years. Whether it's reading his sketchbook diaries in American Elf, rockin' out to "Hockey Monkey," or soaking in his gloriously warped take on The Legion of Super-Heroes in the hilarious Super F*ckers, you will certainly find something to enjoy in Kochalka's work.

My first exposure to Kochalka came in the pre-internet (at least for me) days, when he launched the famous anti-craft manifesto at The Comics Journal. His basic point was, and I'm paraphrasing from a distant memory here, "just draw and stop worrying so much about it." Now, of course, Kochalka teaches at the Center for Cartoon Studies, and from what I gather, he sets up a variety of assignments which result in students learning that they should just draw, without worrying so much about it. It's a good philosophy, but it wouldn't necessarily result in good comics all by itself. Luckily, Kochalka's cute-and-twisted look at the world more than makes up for a lack of craft (and as anyone with eyes can see, Kochalka's a pretty great artist anyway--he just doesn't worry about making his art look like other comic book art). 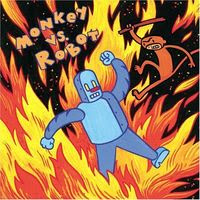 After reading about Kochalka for years, I finally tracked down some of his comics, starting with the Monkey vs. Robot graphic novel. I couldn't resist buying the accompanying album as well, and I spent the following week sharing the Kochalka joy with everyone I encountered. My wife just didn't seem to see the greatness of "Bad Astronaut," but that didn't stop me from playing that song over and over in the car. Later that year, I loaned my copy of the graphic novel and the album to one of my students who seemed to have good taste. She liked the Kochalka stuff, she said, after handing it back, but she didn't love it. She also spilled orange juice all over the pages of Monkey Vs. Robot, but such is the price I had to pay to spread the Kochalka, even to an ungrateful audience.

James Kochalka's masterpiece, though, is the second volume of American Elf. In this full-color collection of sketchbook diaries, Kochalka poetically captures the minor details of life in a style that is both sparse and beautiful. The first volume is excellent as well, but in the second volume, Kochalka has matured as an artist, an observer of life, and as a father. It's in his relationship with his wife and son that we see the new Kochalka, a little less preoccupied with himself and a little more fascinated by the world around him. It's a transition that any parent can understand. Unlike a television sitcom, in which the addition of a cute child is a sign that the show is doomed, American Elf: Volume 2 shows that, in real life--at least four panel slices of it--every new experience is a chance for wonder, amazement, sadness, beauty, and joy.

Get your Kochalka on!
Posted by Timothy Callahan at 4:18 PM