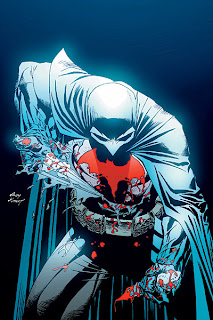 Ah, Batman #665. Morrison seems to be disappointing critics with his run on this title, and I find myself constantly defending the work. I trust him enough as a writer to wait and see how it all turns out, before saying it's a failure. It is ridiculous, after all, to judge a complete work on the basis of a middle chapter (or even an early chapter, really--and Morrison claims he's going to stay on this title for another year or so. That's a lot of stories still remaining). So I won't rate this issue (although I did enjoy it, as I've enjoyed all of Morrison's work on Batman thus far); what I'll do instead is offer a perspective on what it all means, as I did for the previous couple of issues (here and here).

1) Morrison contrasts the hard-boiled internal monologue with the pathetic reality of Batman. As I've said before (especially in my book), Morrison is primarily an absurdist, but here, he's in full ironic mode. "Face down in my own blood and vomit in the pouring rain. / Must / Must be. / Must be a better way / to strike terror / into the hearts of criminals," Batman thinks as we see him collapse in front of a bunch of prostitutes. Notice Morrison's line breaks to emphasize the halting (and poetic) rhythm of Batman's internal monologue. Look at the response of his adoring public, as one prostitute diminishes and sense of Batman's grandeur with the lines, "So he fell off his batrope. / So screw him." Later, when Batman returns to action, Morrison leaves him nearly totally silent. His few lines of inernal monologue near the end of the issue are terse and direct. "Everything hurts," he says. That's about it. Perhaps his thoughts are no longer needed because he has Robin to talk to in the climax of the issue, but Batman doesn't say much to Robin either. His purple prose disappears when he needs to get to work. Morrison's Batman strives to be efficient and brutal.

2) Morrison brings back a few of his favorite Batman motifs: doubling and dreams. The Batman doppelgangers, and the mystery of their existence (and agenda), drives the narrative. They seem to be distorted reflections of Batman's psyche. One, a brutal killer with a gun, reflects his the childhood trauma of his parents' murder. Another, the Bane clone, reflects Batman's greatest defeat (and recalls that Batman himself was pumped up with the "venom" steroid at one point as told in a Legends of the Dark Knight story arc). The third doppelganger, who has not yet appeared, reflects a Batman driven by vengeance. Someone who has sold his soul to the Devil, recalling the pact made by Mr. Whisper in Batman: Gothic. In Morrison's cosmology, dreams are essential to the detective skills of Batman. In Arkham Asylum, the entire story is written as a dream. Everything in that story is Jungian dream symbolism. In Gothic, Batman receives clues through his dreams, and he follows a dream logic to track down the origin of Mr. Whisper. In this current Batman storyline, dreams are no less prominent. Bruce Wayne has been tormented by dreams of these Batman doubles, and now he must face them in reality. His worst nightmare, the fear of going to far in his quest for vengeance, is literally embodied by these three twisted Batman doppelgangers.

3) The Black Casebook, an ingenious device created by Morrison to allow Batman to reconcile the supernatural and alien experiences in his past, represents the kind of hyper-continuity Morrison loves. Some readers dislike Morrison's approach to continuity. They say that his stories ignore past continuity and his characters act "out-of-character" (I, myself, have accused Morrison of this in his very last issue of Batman, but I'm not perfect either). Such an accusation is based on a limited view of continuity. It's based on a vague notion of "recent continuity," and tends to ignore the thousands of older, inconsistent stories. Morrison doesn't ignore continuity. He embraces ALL OF IT. It's a hyper-continuity that accepts all inconsistencies and contradictions. As Geoff Klock explains in How to Read Superhero Comics and Why, "Morrison's prose, his rhetoric in both fiction and life, is so sprawling and insane as to be able to contain the mass of signification endemic to the superhero narrative." He's talking about Morrison's JLA, but what Klock means is that Morrison is not bound by a traditional notion of "reality." To Morrison, the contradictions and inconsistencies are not meant to be explained away or ignored, they are meant to be part of the story. The Black Casebook is a physical manifestation of this. Batman cannot logically accept his past experiences where he visited Hell, or where he was turned into a gorilla, but those stories did happen, and he has recorded them.

No matter what Morrison seems to be up to here (and, by the way, I would guess that Jezebel Jet has been created just to kill off, but I could be wrong), we'll have to wait and see how the final puzzle turns out before we rush to a judgment. Let's just enjoy the pieces for what they are.
Posted by Timothy Callahan at 9:49 PM

In the Batman RIP story arc, Batman is supposed to die at midnight courtesy of the Danse Macabre.It has not yet been established how as of yet, but it seems that Hush will have an important role in the Batman RIP arc. Look at at the info I found from Wikipedia on Danse Macabre:
Danse Macabre has been used as background music in horror television series such as Buffy the Vampire Slayer (in the mostly dialogue-free "Hush")....
link: http://en.wikipedia.org/wiki/Danse_Macabre_(Saint-Sa%C3%ABns)

I'm not saying this is anything definite, but strange coincidence no???