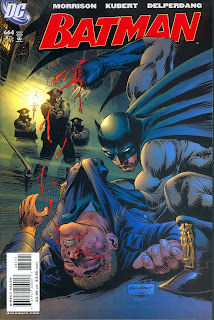 And the internet scratches its head.

Batman #664 sure is interesting, though, but not in the same way the previous issue was. This issue is practically wordless by comparison, and while #663 was all about identity and patterns, this issue is all about action and pimping. What an abrupt shift in tone and style!

Yet, if we explore what's going on here, I think we can find some meaning, even if it's ultimately elusive:

1) Morrison plays on the "millionaire playboy" image of Bruce Wayne by turning him into James Bond times 10. Bruce actually says, "I'm much cooler than he is," in reference to James Bond. Then he proceeds to blow up a helicopter by throwing a ski pole. Pretty badass for a character who has acted like a foppish imbecile in past appearances.

2) Conversely, in his Batman guise, Bruce is shockingly ineffective in this issue. Sure, he beats up a few dirty cops, but his "battle" with this Bat-Bane character (or whomever he is) is over in a hearbeat and the monstrosity throws him around and apparently breaks his back.

What does this mean, though? Well, it shows that Morrison has a sense of humor, for one. By alluding to the famous Bane-breaks-Batman's-back sequence from the 90s, he's recalling a low point in the career of Batman and a low point in the quality of the Bat-books. It's a wink at the audience, for sure. But is there a deeper significance? Surely. It's Morrison. But we'll have to wait and see how the arc plays out to make the final judgment on that. With the inversion of the normal relationship between Batman and Bruce Wayne (traditionally, Bruce Wayne is the weak, ineffective one, and Batman is the ass-kicker, obviously), Morrison recalls his early work like Zenith, where the title character scoffs at the very idea of doing anything heroic (or physical) and Animal Man, where the title character is an active pacifist, and is shown up by his wife (who saves the family from the Mirror Master's home invasion). In those early works, Morrison was exploring the very notion of heroism, and undermining the traditional view of pugilistic superheroes. In Batman, I don't think he's doing that. After all, his Batman defeated a bunch of Ninja Manbats in a previous issue! Once again, we'll have to wait and see what this ineffective Batman and this Bat-Bane character represent. It seems almost dream-like, though. Perhaps he's exploring some Arkham Asylum-style, it's-all-in-his-head type of story. I don't know.

Then there's the question of the narration:

3) Batman has these internal monologue caption boxes in this issue. That's not strange in itself. It's been a normal Batman motif since Frank Miller's Dark Knight Returns, but Morrison has specifically avoided them in the past (like in Batman: Gothic, for example), and he even spent an entire issue of Doom Patrol mocking these types of captions by having a ridiculous character called the Beardhunter wax poetically about his love for firearms and violence. In this issue of Batman, Morrison seems to over-indulge in the very technique he has ridiculed, giving Batman lines such as "I'm opening a can so full of worms you could bury your dead in there and they'd be bones by morning."

So, what does this all mean? Morrison could, very possibly, be embracing these Batman conventions. He could just be playing in the Batman sandbox, using all the toys without regard for significance or meaning. Or he could be giving us some clues that something's a bit off here. After all, in addition to his internal monologue, Batman also has some uncharacteristic dialogue. He chats with some hookers (whom he seems to know on a first-name basis) and asks them, "What's up?" "What's up?" Really??? That just doesn't seem like Batman. In Morrison's version or otherwise. So, perhaps this Batman is an impostor, or something is going on with Batman (again, could it be a dream-state?). We'll have to wait for more to find out.

Then there's this "Black Casebook" mystery:

4) Batman alludes to a Black Casebook which, in the back of his mind, seems to have some significance to this case. Something which might connect a previous Bat-imposter with this new Bat-Bane who shows up at the end. Something which might, perhaps, explain this Batman acting out-of-character, maybe? Either way, we get nothing more than the name--"The Black Casebook" and a hint of its relevance before he's knocked unconscious. It is nice to see a mystery element in the story, though. We don't get to see Batman's detective skills enough.

Any meaning to this? I really don't know, unless, as I have indicated, that it all ties into to multiple Bat-impersonators and this guy in issue #664 is one of them. Maybe there's a whole army of these guys and they all THINK they're Batman. Could someone like the Mad Hatter have implanted a bunch of Batman cowls with one of his crazy mind-control devices? That's not likely, but Morrison is fond of Alice in Wonderland type of absurdity, so it's not impossible to think that we'll see the Hatter in a future Morrison story. Or, perhaps, as I speculated in a Barbelith thread, the "Black Casebook" mystery will lead Batman on a metafictional quest to the doorstep of Grant Morrison himself. And the Casebook will turn out to be Morrison's notebook and Batman will learn that he's a fictional character in an implicate order and then Batman will kick Grant Morrison in the face.

Basically, I don't know what any of it means, yet, but issue #664 provides a bunch of questions that Morrison will be sure to answer in the issues that follow. That makes it a pretty solid start to a new storyline then, doesn't it?

And, yeah, it's got a pimp wearing golf attire too. I'm sure that's symbolic somehow.

We'll have to wait and see.
Posted by Timothy Callahan at 9:54 PM

Well, you've managed to get me interested. I was completely bored by the issue, but you point out some cool stuff. Good thinking, and it's at least got me wanting to see the next issue, where before I was just expecting it to tide me over until #666 (future-Batman vs. the devil!) and #667 (J.H. Williams!).

Grant Morrison is great, but come on it would be nice if these comics took more than three minutes to read. I think that was what Batman 663 was really all about, going in the entire opposite direction of 'western manga' supercondensed story-telling taking stylized anti-word economy as far as it can go. But now were back to normal. This issue was surely a lot of fun, the art and hip Bruce Wayne. But it just ended too fast. Interesting analysis of yours, can't wait to see if any predictions come true.

I think you're being too harsh on Knightfall, honestly.

It's more ambitious of a project than it's typically given credit for, probably too much for the era it was written it.