Each week, I spend one hour a day sketching, building up a set of skills that should, we all hope, show improvement over a one-year period. Sometimes I'll draw by copying comic book artists, sometimes I'll draw from life, sometime I'll draw from how-to books, and other times, I'll just sketch with whatever is at hand. This is WEEK TWO of a 52 week experiment to see how well I can learn how to draw. 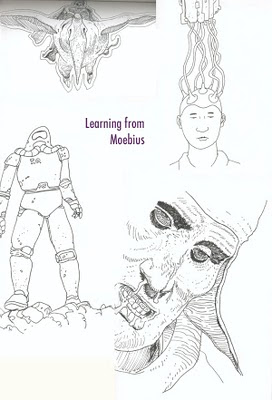 I'll admit that I have already broken the "one hour a day" sketching regime rule, though this week it was because of the holiday and family responsibilities, and as selfish as I can be, I can't really say, "hey kids, I'm going to ignore you during this Thanksgiving vacation because I have to copy some French guy's pictures of people wearing funny hats."

I did spend a few nights with the Moebius books cracked open in front of me and that pen and ink flowing, but it was not even close to a full hour each night.

For most of these sketches, I skipped the pencil stage entirely. Except for Arzach on the top left, I drew all these directly with a fine point marker. I wanted to focus more on texture than structure this week, and I found this week's sketches to be an interesting contrast to the bombastic anatomical contortions of the John Buscema Marvel figures.

You may be wondering why I went with Moebius this week, and I suppose I am too. "How to Draw Comics the Marvel Way" was an obvious, and sentimental, first step on this experiment of mine, but to go with Moebius second? It's not like Moebius is my favorite artist, or even an artist I necessarily had planned to emulate in the long run. It might have made more sense, from a building-from-the-ground-up approach, to go to Eisner next, and do something with his how-to books. Or even to go with Kirby, which is really at the core of the lessons Buscema was demonstrating. Or to go with someone contemporary, as a contrast to the classic superhero style. Quitely, perhaps.

Yet Moebius seemed like the perfect contrast. And though he's not my favorite artists, I do like his work a whole heck of a lot. With Moebius, particularly the work I chose to focus on, which comes from the Epic reprints from the 1980s (though I avoided Blueberry, mostly because that seemed more conventionally illustrative and less Moebius's signature style), you get the anti-Buscema in a lot of ways. His figures are reservedly posed, compared to the dynamic anatomy of Buscema. Moebius noodles around with detail and cross-hatching and stippling, while Buscema is all bold lines and masses of shadow. Moebius also goes clear line with some of his comics, and the clear line style is the antithesis of the curved, pencil-thick holding lines of a Spider-Man in action.

And, ultimately, I just wanted to try something new. Texture over form. Ink more than pencil. And see what came out.

NEXT WEEK: With America and Europe already represented, dare I make my way to manga territory so soon?
Posted by Timothy Callahan at 6:00 AM

Hi Tim, I'm really interested in seeing your improvement week by week. I like and I undestand your desire to explore the different styler world and it's very important because passion and motivation is the key for learning. On the other side I suggest you to learn from more "classic" artist and move to exlore more stle once your base is solid. I know that probabbly they're not your fave but for istance try to copy Alex Raymond from Rip Kirby or Al Williamson from Agent Corrigan. You maust learn the way a figure is structured and lightening, clothes folds etc...Moebius interpretation of light and shape dowesn't make sense at this stage. Please don't want to sound rude tho it's ust a suggestion pal

I LOOOVE Alex Raymond, and I plan on going around the block with him, definitely.

(I'm kind of purposefully ignoring the traditional path of building up the form and then layering on top of that -- trying a more eclectic barrage of styles up front, but I see your point.)

It makes sense to skip the pencils when doing Moebius, since apparently he went straight to ink himself, as I found out while digging through the comicscomics archives last weekend. Looks good.

Yeah, it's pretty clear from the way Moebius fills his panels that he either did the roughest of pencils or skipped the pencil stage entirely.

I Tim, without being any harsh or anything, do you sometimes think about the time you spend writing the blog, and that it could be used to make more drawings ?
However, of course it makes sense skipping the pencil. You can't learn drawing using a rubber ( is that the roght word ?), but using a pen !
Sorry for the poor english, it(s from a french cartoonist.
Keep it up, fin an hour a day and you'll progress at lightning speed.

Pierre, I don't really spend any time writing for this blog anymore (other than these weekly posts, which take about 30 minutes, at most, and that includes scanning time), but I DO think about how many hours I work for real (as a teacher and school administrator) and I think: wow, if I worked that hard, for that many hours, on my drawings, I would be so, so, so much better.

And poorer. And my wrists and back would probably be in terrible shape.

So I don't really dream about it too long.

But I do have this weird expectation that when I retire from education, I will devote myself to drawing full time. I have always assumed that will happen. But by then I will be old and will I even feel like drawing any more? I wonder...

Hello there again,
your goal seems clearer for me now you've explained it a bit more.
By the way, I'm enjoying your reviews on CBR, and always shared lots of your tips about some of my favorite writers, Morrison on top of all of them. You and chad (I think ...) made the best commentaries on the fabulous series "Final Crisis", witch was, from my point of view, a little misunderstoud. Anyway, I feel like Morrison has found with DC comics a mainstream home to build a very strange and powerfull bat-world, of wich I enjoy every bit.

Back to your drawings ! It feels strange for me to read about someone for whom (?)drawing is just a hobby. Didn't you ever tried to work half-time as a teacher. That's what I'm doing myself, and I find a good balance between my two activities. If you progress to slow, won't it be discouraging ?
Thanks for answering !