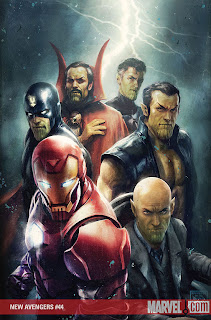 Recently reviewed by me at CBR: New Avengers #44, about which I write the following sentences: "Remember all the fuss when Bendis took over 'Avengers,' blew everything up, and then launched this title with a new, very un-Avengers grouping? That seems like such ancient history, doesn't it, now that we've seen what Bendis has been planning all along? That team of Wolverine, Spider-Man, Iron Man, Captain America, Luke Cage, Spider-Woman, and the Sentry seems like a quaint little gang of heroes after everything that's happened in the past few years. If only they knew what they were in for! But those who complained that the 'New Avengers' wasn't the REAL Avengers will have even more to complain about with this issue, because 'New Avengers' #44 isn't about the Avengers at all -- new or old."

"It's about Reed Richards, of the Fantastic Four."

"But it's not even about him, really."

"It's about a clone of Reed Richards."

Read the entire review HERE.
Posted by Timothy Callahan at 8:41 AM

I always find it funny when people try to apply real life science to comics.

outside of that, anything goes.

Seth, don't you know that Marvel is known for its realism?!?

(I know it's ridiculous to complain about the silly science, but it is REALLY silly to think that a clone would have your knowledge. It's like saying that a clone of Thor would be able to lift a magical hammer or something.)

Tim, that was a ROBOT clone, thank you very much.

MOM, I'LL TAKE OUT THE TRASH IN A MINUTE!

what were we talking about?

Ah, but "clones having the same memories as the original" is standard in the Marvel universe. It happened with the Spider-Clone waaaaaaaaaaaaay back when it was first introduced and that's just how things go. Would you feel better if they threw in a line about having recorded the brain patterns of the person they cloned and transferred them into the clone?

I would feel better if they included a voice chip of Stephen Hawking saying "Let it go, Indiana."

Didn't they get mental templates of the Illuminati members when they were captured? I remember an earlier Avengers tie-in remarking on the fact that they built the Hank Pym or Elektra Skrull out of Reed and others' memories. A cloned Reed mind would have the computational power, it would just need the educational input to derive the solution, and that could presumably be psychically or magically implanted.

I like David's idea (or whoever's) that any copy of Mr. Fantastic's brain is the best computer ever.