In my All-Star Superman-centric "When Words Collide" column -- to be published later today -- I mention that Morrison's Superman first appeared, in comic book form, in the pages of Animal Man #2. But what I didn't mention, largely because it's a minor footnote in Morrison's bibliography and because it didn't have much to do with the point of my column, is that Morrison's very first Superman story was "Osgood Peabody's Big Green Dream Machine..." a prose tale from a UK Superman Annual published in 1986 1985.

If you read the story, you'll see that it has a distinctive Silver Age meets Morrison feel to it, and though I didn't mention it in my column, I just wanted to assure everyone that, yes, I know this story exists, and yes, I skipped any mention of it in my column anyway.

If that offends you -- if you think, well, he should have mentioned the prose story, even though it's not a comic, I apologize, and to make it up to you, here's "Osgood Peabody's Big Green Dream Machine..." with illustrations by the young Barry Kitson! Enjoy! (Click on the pages to make them big enough to read.) 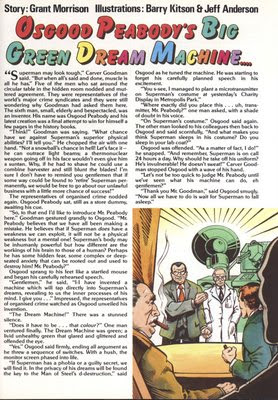 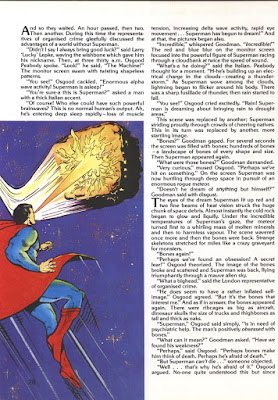 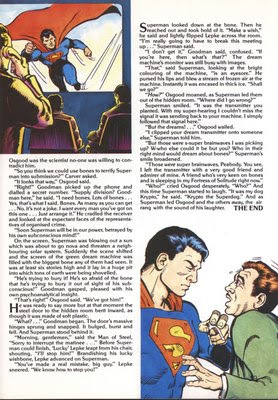 Posted by Timothy Callahan at 6:00 AM

Well, as deeply offended as I was by you not mentioning this story in the column that hasn't been posted yet, this was a great way to make up for it. Thanks for sharing.

I'm deeply offended that you chose to get the publishing date of the annual COMPLETELY WRONG. All British annuals are released around the August of the year before their cover date so this Superman Annual 1986 would have come out in August '85. Fancy not knowing that.

(I hope you're right, because now I've immortalized your advice via strikethru!)

Wow, I really loved the article on CBR. There is enough in the actual story for a full Lit Crit, but I don't know how many people would read it.

You know, I wasn't reading comics when Watchmen or DKR or Promethea were coming out, but I was reading All-Star Superman. That's makes up for it. Haha.

I have the annual so did a quick check and the copyright date is 1985. Getting an annual in your Christmas stocking is pretty common in Britain (though possibly less so these days) and they are always cover-dated for the following year. But I'll forgive you. Good article, mind.