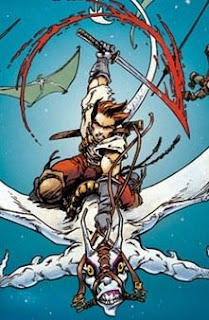 I'd never even heard of Lanfeust a month ago, but at the New York Comic Con I had a chance to meet prolific French comic book writer Christophe Arleston and Soleil Managing Editor Olivier Jalabert and learn about their attempts to bring Arleston's extensive fantasy series to American audiences.

I usually spend my "When Words Collide" columns on analysis or celebration, but sometimes I spend it doing interviews. This is one of those times.

Even though there was a bit of a language barrier, Arleston had a lot to say about his favorite kinds of comics and how he goes about creating his own "World of Troy." Read all about it in this week's WWC!
Posted by Timothy Callahan at 6:45 PM

Was that troll child eating ladyfingers?

Yes, that was a terrible joke.