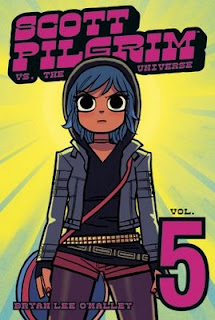 The New York Comic Con sucked up most of the past week, but I did read a few non-floppies since the last time I did one of these "What I've Been Reading" installments. The most important -- and the best -- book I read recently was "Scott Pilgrim vs. the Universe." I wrote about how it was the book of the show, and maybe the book of the year, in my WWC con report, but I didn't talk about the book specifically.

Here's the deal: not only has Bryan Lee O'Malley developed into a phenomenal stylist (not that he was a slouch in "Scott Pilgrim" Vol.1, but his art has become a lot more dynamic and consistently well-designed from page to page), but he has also matured as a storyteller. Or maybe he always had that mature storytelling thing going on (he did create the excellent "Lost at Sea"), but he's now at the point in the "Scott Pilgrim" narrative when the maturity can move to the foreground and the fisticuffs and the frivolity can move to the background. That literally happens in Volume 5, as O'Malley presents the physical conflict (Robots! Evil Twins!) and then doesn't spend much time lingering on the video-game-style battles. Instead, the loss -- the devastating, empty, void-inducing absence of Ramona Flowers -- is one based not on juvenile violence, but on the complexity of romantic entanglements. Juvenile violence is good times -- "Scott Pilgrim" is based on it to some degree, and it's such an inherent part of its DNA that O'Malley cannot abandon it -- but if "Scott Pilgrim" is about growing up, and moving from innocence to experience, then "Scott Pilgrim vs. the Universe" is the book in which that shift occurs.

I tore through it at the hotel on Friday night before my family rolled into town, and it was great.

I also read Jonathan Hickman and J. M. Ringuet's "Transhuman" trade. I didn't think it was very good. It's like a pitch for a longer, better series. It's like a prologue for something else, except the prologue jumps through time to tell, instead of show. It's not a story, it's an outline for a story -- an illustrated outline. I'm glad that Hickman is trying to tell stories that are different from other things on the shelf, but it's still just all about the telling. I wouldn't even call it compressed, I would just call it an essay on genetic engineering and the role of the corporation. Which is fine, if that's what you're into. But the danger with Hickman's approach is that his themes are too obvious, his attitude too obvious, and the characters are mere puppets in the service of social commentary. It's the 21st century equivalent of the "Green Lantern/Green Arrow" impulse, but without the revolutionary Neal Adams artwork.

I've had the first five volumes of "Drifting Classroom" by Kazuo Umezu sitting on my shelf for months, and I finally had a chance to read the first two books. Tucker Stone has mentioned the series a few times, and I've always had good intentions about reading it. But now that I've started, I really can't wait to read more. There's the addictive-serialization quality that plenty of good manga has (and most American comics lack, sadly -- how many of them really compel you to race to the comic shop to find out what happens next?), and there's also a pervasive dread from three angles: (1) the horrible idea of being a student trapped in school with a bunch of teachers, (2) the horrible idea of being a teacher trapped in a school with a bunch of students, (3) the horrible idea of being a parent who has lost contact with his or her child. And the interplay between those three layers of anxiety. It's surreal and haunting and it makes "Lost" feel like you're waiting in line at the DMV.

What are YOU reading?
Posted by Timothy Callahan at 7:00 AM

The Witches by Roald Dahl.

The Elegant Universe by Brian Greene.

I wish Oni would send me all the volumes of Scott Pilgrim. I hated volume 1, but the gushing over the rest of the series makes me curious, but I don't want to get burned again. Damn. Today the comic book store is having a sale. Maybe I'll suck it up and buy them for a bit cheaper than regular price.

Let's see ... a book about the Battle of Adrianople in 378, and I just finished Dreamland by Kevin Baker, which is quite excellent. And, you know, various comics.

I'm just starting Roberts Anton Wilson and Shea's Illuminatus!, I finally got my hands on the two published volumes of Big Numbers, ordered a bunch of Quality Comics' Zenith reprints very cheap off eBay (to go with book five which has been lying in the pile for some months now) and - finally - the final issue of The Wintermen (how come people aren't up in arms about how great this series is/was? If this had been a monthly it'd easily be my favourite title). On the waiting list is getting through Malcolm Lowry's Under the Volcano (and if that works out well, maybe finally finishing Magic Mountain) and Ultramarine.

Oh man, I can't wait to hear what you have to say about Drifting. even if you're not as into it as I am (which will of course mean you need to re-read it until you have the correct response), it's gonna be great to hear some more about the series from a different point of view.

A Dirty Job by Christopher Moore

Deathblow: And then You Live! by Azzarello/D'anda

I hear you on Transhuman. I l thought it was OK, but his "mockumentary" style lent itself a bit too much to people simply talking at you. There were points at which it was a bit of a chore to read, I almost felt like, rather than an ongoing or longer series, it would have been better off as an over-sized one shot. Get the point across, allow for the humorous farcical side he was going for, and move on. But Hickman is at least always interesting. Did you read his story in Astonishing Tales #1? It was, again, a totally different story for him.

Greg -- You are probably just too old for Scott Pilgrim. You should stick to stuff that's more your speed, like the cave paintings at Lascaux or the Bayeux Tapestry. Basically, anything dusty that ends with an "x."

Shecky -- Is Wintermen really all that good? I haven't bothered to read it all in one sitting, and I didn't find the finale all that amazing. Also, I've been "reading" Magic Mountain for like five years, and I still haven't finished it either.

Tucker -- I will probably read Drifting over such a long period of time that I'll have no coherent thoughts on it, but I'll try to have some. Or I'll fake it.

Matt -- I did read his Astonishing Tales story. It was cute, which is something I would never say about any other Hickman story.

But it's just "work for hire" stuff that Tucker heard him dismiss.

Well, I guess Wintermen is an either you love it or you hate it or you think it's just sort of mediocre - nothing in between - kind of thing, and I guess a lot of it depends on your fascination with intentionally bad english, but it's fun, it's extremely well paced and it's packed with . . . stuff. And that's something that's getting ever more important to me. Comics really should aspire to take more than ten minutes to read. In addition, of course, to being sort of, you know, brilliant.

I liked Transhuman, but i think reading it in the single issues probably helped me like it more than i would have if i read it in a trade.

Like Matt mentioned this story probably should of been an oversized one-shot as opposed to a series but the thing was that it came out so sporadicaly that it always felt like a one-shot. I usually barely remembered what happened in the last issue, and it always stuck out as being really different from whatever else i was reading that week.

If i had read it all in one sitting, i probably would of found it boring and repetitive. While that's certainly no ringing endorsement of the series, i did enjoy it for what it was when it was coming out. At least Hickman was trying something different.

I just read the latest Fables storyline, "the Dark ages", a transitory storyline but very well pulled-off, that it made me set out to read all of Jack of Fables, in preparation for the big crossover.

And not only that, but it inspired me to write an analysis on Mister Dark, the new villain, and I think, an obvious Sandman stand-in:
http://splintercomics.blogspot.com/2009/02/mister-dark.html

Get off my lawn! (Shakes cane.)

In the process of rereading Avant L'Incal and The Incal.