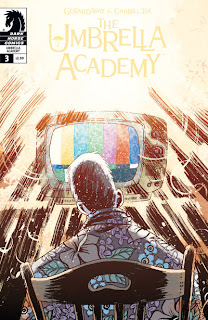 Recently reviewed by me at CBR: Umbrella Academy: Dallas #3, about which I write the following sentences: "It's too early to say for sure, since we're only up to issue #3, but this second 'Umbrella Academy' series feels a bit more expansive, a bit more improvisational. I don't mean to imply that Way is making it up as he goes along -- and with time travel as a plot point, it had to be well-constructed ahead of time -- but it feels less rigid and uptight than the first series. I know 'uptight' seems like a strange way to describe a comic in which a superhero named Spaceboy had the body of a gorilla and the head of a man, but the first series felt very tightly-controlled. Like a Tim Burton film, it was all fine-tuned and hyper-meticulous, as if it were competing in the World's Most Specific Diorama Competition. As great as the first 'Umbrella Academy' series was -- and I absolutely loved it -- it's one fault was that it felt a little too boxed in."

Well, I liked this issue fine, but still I'm kinda opposed on the shift in tone that happened since the first mini-series.

I don't think that Umbrella Academy has to be dark and bloody to proceed narratively from the place it was when it debuted. Same goes for the time-traveling plot, which feels a bit more true to the book, but still needlessly complicated.

I hope that the following issues bring more charm and weirdness, and the whole mini comes together well.