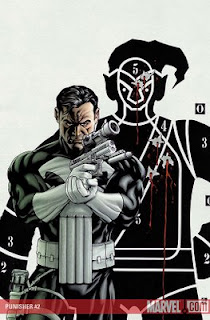 Recently reviewed by me at CBR: Punisher #2, about which I write the following sentences: "But that’s not what Rick Remender and Jerome Opena are doing here, anyway. What they’re doing is answering the question: What would the Punisher do in a world run by Norman Osborn? It’s a fundamentally different scenario for the Punisher to be in -- he isn’t a rogue vigilante in a world populated with mobsters and drug-runners and slave traders. He's a vicious hero in a world that has been taken over by the supervillain military-industrial complex. It opens narrative possibilities that Matt Fraction didn't have in 'Punisher War Journal.' It allows the Punisher to play a more important role in the Marvel Universe proper, instead of being relegated to the back-alleys and blackened rooftops. "

Read the entire review HERE.
Posted by Timothy Callahan at 7:00 AM