What I'm Watching: Day of the Outlaw 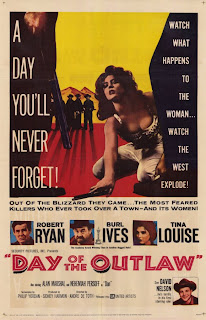 Andre de Toth's 1959 snowbound western "Day of the Outlaw" features the incomparable Burl Ives as Captain Jack Bruhn, a military man who leads a pack of roaming outlaws into a small frontier town. Like pretty much everyone from my generation, I only really know Ives as the snowman narrator of "Ruldolph the Red-Nosed Raindeer," so hearing his familiar voice come out of a hardened killer was startling and wonderful.

Startling, because his sweet, soothing voice commands the respect of his men and creates some sympathy from Robert Ryan's Blaise Starrett. Wonderful, because unlike the typical Western villain, Ives seems like a kindly grandfather burdened by difficult choices. He's evil, but it's an evil built upon a series of choices made long ago -- decisions he may regret, but he cannot change the past.

But that spark of redemption drives the film, as Ryan -- a cattleman not without his own dark flaws -- tries to appeal to the best of Ives's morality in an attempt to keep the outlaw gang from destroying the town. The gang wants nothing more than to drink whatever the tavern has to offer and grope whatever women happen by. Ives has more dignity than that -- he forbids whiskey and women -- but he's dying from a bullet wound, and that ticking clock amplifies the tension significantly.

The female lead, so lasciviously shown on the movie poster, is none other than Tina Louise from "Gilligan's Island" fame. She's great in this role (a much more conservative one than the poster would indicate), and she's almost unrecognizable for those of us who grew up on her Marilyn Monroe caricature in reruns. Here, she's fierce and stoic, and she doesn't have enough to do, but what she does, she does well.

"Day of the Outlaw" ends with an anticlimactic showdown in the snow, as Robert Ryan's character leads the outlaws over a mountain pass that doesn't really exist, and one by one, the gang members fall prey to the harsh wintry conditions.

But when Burl Ives is on screen, it's a captivating film, and definitely worth a look.

What are YOU watching?
Posted by Timothy Callahan at 11:18 AM

I was aware of the title, likely through TCM, but I am more into crime noir. Just the mention of Burl Ives as the bad guy is enough. Have you ever seen Robert Mitchum in BLOOD ON THE MOON, the first western noir? And, yea, Tina Louise. I recall seeing IT CAME FROM OUTER SPACE (and introducing Russell Johnson), and yet everyone knows him as The Professor on GI.

I've got Detour waiting on my shelf. That means I'm not quite watching it yet. And hey Jason Aaron, I've got a question. Scalped is great, but I prefer reading it in trades. How much does that hurt you economically?

Dang, that sounds cool. I'll have to check that out.

The Squid And The Whale

Both of those are pretty indie, and both of them are pretty great. Netflix was kind to me this week, haha.

Today has been a day of watching movies that I haven't seen since I watched them right after buying them:

Tenacious D in the Pick of Destiny, which I enjoyed more than the first time I saw it--where my expectations were higher. A stupid little comedy with the odd laugh.

Art School Confidential, which I got on DVD over Christmas break during the first year of my master's program. At that time, it reminded me a LOT of the creative writing class I was taking for my degree and it still does. That frustration when someone churns out absolute bullshit and others praise it... Thankfully, my class wasn't NEARLY as bad as the class shown in this movie.

Saved!... oh, Christians... such easy targets... especially the retarded ones like those depicted in this movie.

Then, I plan on watching The Life Aquatic, which really didn't impress me when I first saw it... but we'll see.

If there's time (which there will be), I'll probably watch one more tonight, but no idea what. Maybe The Good Girl, Ghost World, Secret Window, Aqua Teen Hunger Force Colon Movie Film for Theaters, or... Jesus, I've got a lot of kinda-bad to pretty-decent flicks that I haven't seen in a long time.

I may watch Slumdog millionaire tonight. As for the movies mentioned, I've seen some of them. Squid and the whale - nice drama, with great script and a brilliant performance by Jack Daniels. Art school confidential - started out great, but gotten very weird once it started taking the serial killer angle seriously. Life aquatic - some fun ideas, but I preffer Royal Tenenbaums and Darjeeling express to it.