In Defense of The Road (Which is GENIUS) 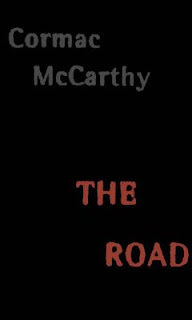 My pal and fellow writer Frank Tempone has thrown down the metaphorical gauntlet by not gushing about Cormac McCarthy’s brilliant novel, The Road. Tempone actually spends much of the review on his blog praising the novel, and he certainly appreciates it for what it is, but he describes the narrative as “painfully linear,” the prose as occasionally “monotonous,” and ends his review by saying “there were more than a couple of elements in the writing that bothered me.” Once again, let me state that Tempone’s criticism of the novel was not very harsh, and provides plenty of examples of what McCarthy does well, but the tone of Tempone’s piece clearly indicates that he’s getting the positive stuff out of the way first, giving us a nice, pleasant feeling before he goes for the jugular in, presumably, a future post.

My response here is a preemptive defense of The Road, which will probably result in a vitriolic counterattack from Tempone, and I will be forced to retaliate, and ultimately, in a battle like this, is victory even possible? Only in the hearts and minds of America, and that’s what I’m aiming for!

So, let me respond to Tempone’s initial criticism of the book:

1) The novel is “painfully linear.” Well, it is linear, certainly. It’s the story of a man and a boy walking down the road, trying to survive. That’s it. No “b” subplot, no significant flashbacks to provide a context for the post-apocalyptic future, no parallel narrative involving a baker’s wife during the Holocaust, no love interest, no metafictional gamesmanship. None of that. I actually found it shocking in its simplicity. I was waiting for some sort of Aristotelean plot development. A three-act structure, even if sparsely developed. A single major challenge for the heroes to overcome (would they be able to reach the magical island of super-scientists looking for a way to rebuild civilization?). Something. But nope. None of that either. And I love it. It shocked me with its direct attention to the narrative present. It wound me up into a paranoid ball as it forced me to confront the immediacy of this humble quest for survival in a harsh landscape. And I’m a big fan of ultra-complex novels. I’m a structuralist at heart. I love breaking down narrative. I love Moby-freakin-Dick. Yet, The Road astounded me with a simple story, told with sharp, terse sentences. It’s ALL Act III. Acts I and II happened before the novel opened, and they are barely hinted at. And it works. It works to confront the reader with the terror of the journey. It works to bind the reader to the father and son, as if we are faced with the impossible journey they face (and I NEVER emotionally connect with literary characters--I just don’t read that way--yet I could not escape the father’s point of view and I couldn't stop thinking about my own son while I read). And it works to build suspense, since we really have no idea what lies ahead on the road any more than the father and son do. That’s what’s most striking about the novel, I think: I did not know what would happen next, and as a structuralist and a scholar, I ALWAYS feel like I know what’s going to happen next when I read a novel (or at least I have a pretty good sense of how all the pieces are going to fit together, but in this case, there are no pieces--just a road drifting off into the hazy distance).

A Digression Here: I stated above that I never emotionally connect with literary characters, and that’s true. I don’t think that’s a good thing, because other people (i.e. my wife and everyone I’ve ever met) always seem to get so much emotional satisfaction out of reading. Not me (or at least, not usually). For me, the satisfaction is entirely intellectual (although it is VERY satisfying in that regard). Just the other day, the head of my English department asked me about the books I taught in my classes, curious to see which ones the students enjoyed the most. Then he asked me, “which one do you think is the best page turner?” And that question totally baffled me, not because I don’t know which books the kids enjoy more than others (for the record, they enjoy The Great Gatsby and do NOT enjoy Heart of Darkness, to name two), but because I don’t think about literature that way AT ALL. To me, asking which novel is the “best page turner” is like asking which book of Picasso paintings is the “best page turner.” It’s just totally foreign to the way I think about the art of writing. His question made me realize how odd my approach to literature truly is (comparatively speaking). And here’s how all of this relates to The Road: when I read the novel, I felt, as I always do, the intellectual pleasure of enjoying vivid sentences and beautifully painted (if horrific) images, but, because of the narrative confines, I became trapped inside the story in an emotional way. It was, I assume, the feeling that you get when you call a book a “page turner.” And I think McCarthy achieved that effect, at least in my case, BECAUSE of the linear plot. So, painful is not the word I would use to describe it. Instead, let’s agree to call it “magnificent.”

2) The prose--is it occasionally monotonous? Possibly. But if, as I teach my students, language CREATES meaning, and the meaning of this novel lies in the unrelenting journey which the characters undertake, then is not monotony appropriate? Does that not simulate the crushing lack of hope which the father faces each day (and the son must be constantly protected from)? So I think it’s appropriate, even if it is monotonous, but I’m not sure I agree that monotonous is the best word to describe the prose anyway. Here’s a random selection from page 130:

"They scrabbled through the charred ruins of houses they would not have entered before. A corpse floating in the black water of a basement among the trash and rusting ductwork. He stood in a livingroom partly burned and open to the sky. The waterbuckled boards sloping away into the yard. Soggy volumes in a bookcase. He took one down and opened it and put it back. Everything damp. Rotting. In a drawer he found a candle. No way to light it. He put it in his pocket. He walked out in the gray light and stood and he saw for a brief moment the absolute truth of the world. The cold relentless circling of the intestate earth. Darkness implacable. The blind dogs of the sun in their running. The crushing black vacuum of the universe. And somewhere two hunted animals trembling like ground-foxes in their cover. Borrowed time and borrowed world and borrowed eyes with which to sorrow it."

And, yes, I flipped open the book and chose this selection totally at random, but it’s a beauty. Look what McCarthy does in this paragraph! I’m not going to explicate the whole thing, but he’s got shocking examples of usage: “scrabble” as a verb! “sorrow” as a verb! “livingroom” as one word! “intestate” which apparently means “without a will (in a legal sense)”--the whole planet has died and left no will--that’s good stuff, Cormac! He’s often compared to Hemingway, because of the simple construction of his sentences, but Hemingway used conventional words in conventional ways. McCarthy doesn’t. He’s far superior to Hemingway in that regard. Look what else he has going on in this one paragraph: the symbols of the rotting books and the candle; the use of Free Indirect Discourse to shatter narrative distance between Third Person and First Person: “he found a candle. No way to light it”; the crescendo of the paragraph itself, which builds from the particular details through the symbolic details to the absolute futility of the entire universe.

And that’s just one paragraph. That’s not what I call monotonous. So let’s agree to use the word, “strikingly brilliant” to refer to his prose instead.

So now it’s up to Tempone to launch his counterattack and clarify which other elements of The Road “bothered” him. Because from where I stand, this novel has withstood the opening salvo.
Posted by Timothy Callahan at 9:36 PM

Oh, I'll play your game, you rogue...Consider the party started.

An excellent analysis. Now I want to go back and read the novel again. That would be my fourth reading, so I guess I don't find his prose monotonous at all.

This book was my first McCarthy. I flipped through it in 2 days, and it is now absolutely my favorite book (and I like so many books).

I completely agree with you on both points. They're traveling on a road! They have no escape to other places, so why should we? We get as much as they get - in terms of narration, pacing, time, dialogue, etc. It HAS to be sparing. It's a story about a world that is sparing. I would venture to say that you connected it with it because McCarthy did such a good job of giving you no alternative because you were reading in confines exactly like the confines they were living in. (I think that's what you just said actually) And the dialogue was wonderful I thought. In contrast to his beautiful descriptive passages (like you pulled out), the dialogue only served to get across the most basic information - which really, was all we needed to know and here. Day in, day out, their life was the same. Moving. Scared. Walking. Surviving. I just went on to tempone's site (actually before i came to yours) and I felt the repetition of the dialogue he pulled out actually drove the point home.

Okay, preaching to the choir. But I love love love this book. Such a wonderful tale of hope for humanity against the demise of society and all that makes us good.

[I've blogged about this book a few times]