Casanova and Fourth World in my Brain 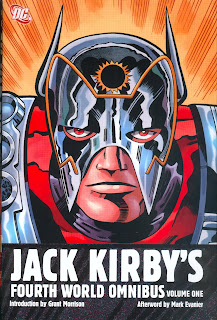 I just spent the week reading two of the greatest hardcover comic book collections in the history of the universe ever: Matt Fraction and Gabriel Ba's Casanova: Volume One and Jack Kirby's Fourth World Omnibus: Volume One. It's insane to compare the two. Kirby's work was done 35 years ago and published across four different interwoven (sort of) titles and ultimately left incomplete, while Fraction and Ba's work is brand new, self-contained and structured like a GURPS module on fast forward. Yet I can get neither masterpiece out of my brain. They have some immense cortex-burning power, these books, and I'm not kidding when I said I spent the week reading them. I have not only read them both, cover-to-cover, but I keep picking them up and reading sections again, not because the plots are densely packed (and they are, though not to a baffling degree), but because the energy in these works won't allow me to put them down for long. Even when I have set them aside for hours (because I have to, let's say, "work" or "feed my kids," or whatever), I think about the images, the ideas, the depth of imagination, and I want to clear my schedule for another dive into the fictional worlds in which a super-escape artist and his dwarf sidekick zoom around on Aero-Discs, in which the three conjoined brains of transcendent Zen monks turns evil, in which Don Rickles' nicer doppelganger confronts Superman, and in which a transdimensional superspy posing as a fashion photographer uncovers the hidden map which might save civilization as we know it. 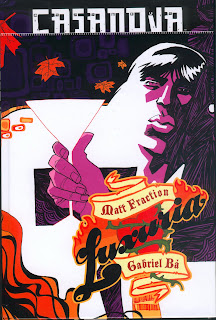 Image provides Casanova with better production value, by the way. The book is glossy and beautiful, just as it should be. It's as slick as a Casanova Quinn doublecross and just as dynamic. The Fourth World Omnibus on the other hand is shockingly light for its size. When I picked it up at the store (and yes, even though I pre-ordered it from Amazon months ago, I couldn't wait until July to receive it, so I bought it at Fantasy Realms at a higher price and cancelled my Amazon order--that's how excited I was before even opening the book), anyway, it felt like it was hollow--like the hardcovers were wrapped around a chewy foam center. That's because, as voices around the internet will no doubt declare, the paper quality is poor. It's like that Mando paper DC used to put in its "New Format" titles back in the late 1980s (which was fine for The New Guardians, but for a $50 hardcover???). It's not the glossy stuff you might find in an Archive edition, or even the glossy stuff you might find in regular floppy comic from DC these days. No, it's like having bound copies of the original New Gods and Jimmy Olsen issues, only without the color bars on the top of the page. Even with the inferior paper quality, the book is still great. Kirby doesn't need glossy paper to blow your mind. The production values in The Fourth World Omnibus don't come from the printing, they come from the genius of Jack Kirby. 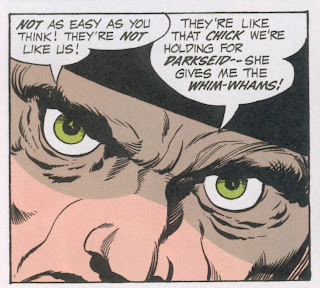 I'm not going to even try to summarize the plots of these two books. You should read them. You will. You must. So, I'll just touch upon the stuff that's been stuck in my brain all week as I've read and reread these two works.

Let's start with Kirby. I've owned the New Gods stuff in various formats over the years. I have a few of the original issues. I have the Baxter 6-issue reprint series. I have the black and white paperbacks. I have the Jimmy Olsen books. But even though this book is only the first volume of a proposed four volumes, I've never read the stories in this way: presented in chronological order by date of publication. The continuity doesn't make sense this way, of course. At one point Superman is knocked out at the end of a Jimmy Olsen story, then flying around with the Forever People within a few pages of the next chapter, then, a few chapters later, he's back on the floor as the Jimmy Olsen story resumes. But that's not important. What is important is the sense of scope and grandeur that can only occur when reading the stories in this way. I'd read them in segments before: all the New Gods stuff, all the Mister Miracle stuff, etc., but I'd never read them with any sense of the issue-to-issue developments BETWEEN the different series. Even though Mister Miracle #2 doesn't directly lead into Forever People #3, it's essential to read them in that order because the Fourth World tapestry develops across all the comics, and it amplifies slowly, but with sudden bursts of violence and danger. Read in chronological order, the entire Fourth World saga feels like a magnificent orchestral arrangement. 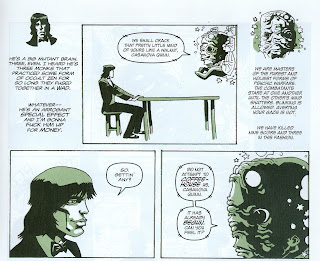 I don't know enough about music to say what Casanova feels like. It's not grandiose in the way the Kirby stuff is, and it's not down-and-dirty punk rock either. It's lean and crisp and complex and stylish. Perhaps it's a new sound, at once stripped down and packed with meaning. An aural cocktail of sex and betrayal and parallel universes and filicide. It's both totally plot-driven and superficial and deeply complicated and resonant, and I can't quite classify it as a sound or as a work of graphic narrative. All I can do is put it next to Kirby and call it some kind of genius. Geoff Klock calls it the comic book equivalent of Kill Bill, which, to him, is the highest praise. Matt Fraction, creator of Casanova Quinn, and not necessarily a big fan of late Tarantino, disagrees. I see what Klock is saying, but I also think that it's less specific an homage than anything Tarantino has ever done. Fraction's work on this book alludes to other work, certainly, but it's not as simple as saying that Casanova is the son of Nick Fury from an alternate dimension. Maybe Kill Bill isn't that simple either, but you can't break down each page of Casanova and identify the allusions to everything Fraction has read or watched the way you can with Tarantino's work. Writer Fraction and artist Ba are recombining genres and styles not to look back at the past, but to make something new for the future. 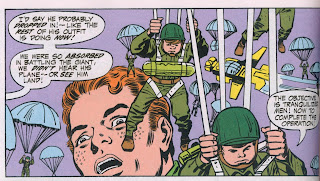 Just as Jack Kirby always did. Even when he seemed to run out of new ideas, his "rehashed" ideas (Eternals and Captain Victory to name two of his lesser works) are still amazingly imaginative. Kirby's Fourth World saga looks to the future too. Even today. It literally destroys the past in the epilogue to New Gods #1, as the old gods are shown facing their final destruction. And, in typical Kirby fashion, he gives the epilogue on THE FIRST PAGE of the series. Talk about compressed storytelling. The old gods=dead. Move on. And he does, with vigor. In the first volume of the Fourth World saga, he builds much of the cosmic architecture that still underlies the DC universe today. Cadmus clones, Apokalips, Boom Tubes, Darkseid, the dozens of New Gods, and Intergang. Those words still appear almost MONTHLY in DC comics, and Kirby threw it all at the reader in these stories that are now almost two generations old. Even Kirby's throwaway ideas, the stuff that didn't take hold in the DC universe, like the miniature clones of the Newsboy Legion who run around as a tiny army, are spectacular. 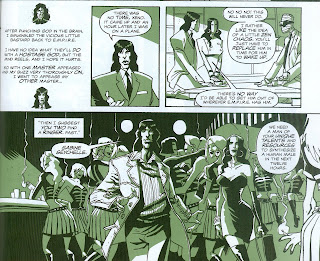 Fraction and Ba pack Casanova with ideas as well: pop group assassins, robot doubles, dimension-hopping secret agents, flying casinos, comic books, and moustaches. Some readers have found it too dense to follow. They are just lazy. Fed on a diet of Ultimate Spider-Man and Justice League of America, where the beat sheets are broken up by issue number rather than page number, the contemporary comics reader might not be able to follow multiple plot twists AND duplicity within a singel issue. Fraction says he wanted Casanova to give readers the same feeling he got while reading Howard Chaykin's American Flagg. He wants people to be initially disoriented as he throws them into the chaos. Ironically, Chaykin's Plex-filled future has come true, and the information overload he prophesized 25 years ago has made the average reader more passive, more unlikely to stick with Fraction's ambitious attempt to make readers THINK about the story. The reader who does follow the Casanova story to the end (of at least Volume One), will be more than rewarded. 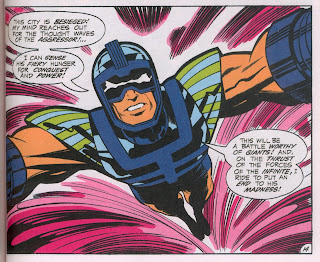 So go out and buy these books. Read them multiple times. Let yourself be swept into new worlds with new labyrinths of ideas. And see if, like me, you can't get these books out of your brain.

Posted by Timothy Callahan at 2:56 PM